Posted in: Disc Reviews by Brent Lorentson on July 6th, 2021 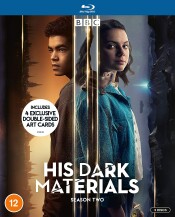 I remember when The Golden Compass came to theaters. I know I saw it because I was a projectionist and had to screen the print, but for the life of me I couldn’t remember anything about the film. Perhaps that’s why that when I first heard about HBO doing a TV series adaption of the beloved book series His Dark Materials, I wasn’t all that thrilled.  I’d never read the young adult series, and considering the amount of awful YA film and TV adaptations that have bombarded us for nearly two decades, it too played a role in squashing any excitement I might have had in different circumstances.  I was definitely pessimistic about watching the , but when I finished Season 1, I was excited about where the next season would take us. I loved the characters, the daemons, and the worlds that the show took us to. Not since Stranger Things had I been more excited about a new series.  Season 2’s can be a make-or-break for a lot of shows. Expectations have been made by the audience, and sometimes things just fall apart, but sometimes there is the rare occasion where Season 2 manages to only get better.  I’m happy to say in the case of His Dark Materials, things definitely improve.

Season 1 left us off with a bit of a cliffhanger as we see Lyra (Dafne Keen) and Will (Amir Wilson) stepping through portals from their worlds, and we’re just not sure where they’ll end up. Well, the pair end up in a city called Cittagazze, a place where there are no adults. Only a few children are living in hiding in the town because of these wraithlike figures called Spectres that basically suck the “dust” or human life-force from adults.  The set design for this new world is impressive, which is a good thing because a lot of time is spent at this location over the stretch of Season 2. Lyra’s daemon, Pan (voiced by Kit Conner) is still going through multiple changes and remains one of my favorite aspects of the show, though thankfully daemons are not in constant peril this season. Instead more focus is placed in the importance of Lyra and Will and how the pair fit into a prophecy that of course will impact the world and all its multiverses.

Considering the first season we never got to see Lyra and Will together, that all changes this time around, and really there isn’t much time where these two are apart. Will is still on the run in his world for murder, but his central focus is finding out the truth about his father he’s long believed was dead.  The first half of the season a lot revolves around Will and his connection to a mythical blade called “the Subtle Knife”, a knife that can cut through anything and also cut holes into the multiverse.  This portion of the plot was a lot of fun. As for Lyra, she’s still on her quest to better understanding “dust”, and when in Will’s world she seeks out a professor, Mary Malone (Simone Kirby) who is studying Dark Matter, and here is where we discover they are one and the same.

Lord Asriel (James McAvoy) has taken a major back seat this season; he’s more talked about than actually seen. The Magisterium is definitely established as the big bad for the series, with Mrs. Coulter (Ruth Wilson), Lyra’s mother, continuing to work with them in achieving their goal … or is she?  Mrs. Coulter is definitely the most complex character in the show, and the dynamic with her daemon is subtle and revelas her true character.  She seems to genuinely want to find Lyra, but this season it’s definitely harder to tell what her intentions will be if and when she does find her. Then there is her relationship with her partner, Boreal (Ariyon Bakare), which is also complicated as we get a better understanding with his connection to the portals.  The sub-plot with Boreal is definitely one of my favorite elements with this season where it definitely humanizes his character and makes him more complex than a simple bad guy.  This pretty much is one of those examples where the more complex your villains are, the stronger your story will be.

So how do the fighting polar bears, witches, and Aeronauts fit into this story? We don’t get much with the fighting polar bear, but we do get a lot more time spent with the witches, and we get to see them go to battle with  the Magisterium. It shouldn’t be a big surprise that we’d see the church doing battle with witches. Even in the real world there is a long history of the two butting heads and demonizing the other, but in this story it is fairly clear who are the good guys. Then there is our favorite Aeronaut, Lee Scoresby, who is on a mission of his own. Though he may not be as front-and-center in the story as last season, he definitely has an important role to play, and he continues to be loyal to Lyra and the cause.  A new addition to the story is Jopari (Andrew Scott), who is a shaman who has information that can protect Lyra on her journey.  Delving much further into this character would lead into some heavy spoilers, so I won’t go any further, but he is a welcome addition to the cast.

Lyra and her journey along with Will is very similar to Frodo and Sam in The Lord of the Rings, especially when the story gets to the Alethiometer (basically a truth-telling compass) and the Subtle Knife. Even the Spectres resemble the wraiths in the LOTR series; the only thing that is largely missing this time around are epic battles. The violence in the show and how dark some of the subject matter gets will definitely come as a surprise for many. Episode 5: The Scholar has one of my favorite moments in the series where Lyra gets to have a bit of a rematch against her mother.  I wouldn’t quite say we’re talking epic family battle like Luke vs. Vader in Empire Strikes Back, but it certainly is a high point of the series.

While the season finale doesn’t quite have the impact of the first season, there is definitely an Empire Strikes Back vibe going on here that has me a little excited. Mind you, I haven’t read the books, nor do I plan to until the series is done, but big things are certainly being set in motion to deliver a big showdown between the worlds.  What sucks, though, is that they have only just began production on the third season, so we have about another year before we see how this story will come to a close.  We get a slight teaser at the end of the credits of the last episode; it’s only a few seconds, but it’s definitely something that has me a bit intrigued.

His Dark Materials is presented in the aspect ratio 1.78:1.  The 1080p image is arrived at with an AVC MPEG-4 codec at an average of 24 mbps. This is a show that pretty much every episode is delivering a new variety of visuals that are a blend between what is shot on a set and what is created with CGI. Season 2 steps things up visually by adding another world to its already expansive universe. Cittagazze has a Mediterranean look which already separates it from everywhere else the show has taken us. This warm color palette is welcome to the show.  The effects seem sharper this time around, and the Daemons look so lifelike that it’s amazing to know these are simply puppets before CGI is applied. Textures come through beautifully, and the details in the set designs are captured well here. Even in low-lit shots, like with the witches in their land, there is plenty of black separation from the costumes to the locations’ details.

The DTS HD Master Audio 5.0 track is what you’d expect from an HBO production of this size. Each episode is like it’s one isolated movie, and the audio touches reflect that.  The score is one of the big standouts for me. Whether it’s the thrilling action or its melodic theme, it helps immerse you in this gigantic fantasy world.  While there are not as many big action pieces in this season, the moments where there is action are balanced well. There isn’t really one stand-out moment where I can applaud the sound design, but it is consistent throughout.  The dialog is always clean, and the score is never overpowering.

There is the option to PLAY ALL, which may be easier than having to constantly hit the controller to play the next chapter.

Noble Rogue: The Legend of Lee Scoresby: (12:43) This of course gets more in depth with the character and features interview snippets with actor Lin-Manuel Miranda and other members of the cast and crew.

Exploring His Dark Materials: (33:30) This is four separate featurettes that cover a variety of subjects that are in the show. In consists of interviews with the cast and crew along with some behind-the-scenes footage.

His Dark Materials: Bringing Daemons and Bears to Life: (5:30) A behind-the-scenes look at how they use puppets on set and develop them with CGI for the final product.

His Dark Materials: Exploring Cittagazze: (3:35) A tour of the set of the new world created for the show.

His Dark Materials: Worlds Collide (2:40) Gets into the different worlds and them overlapping.

The Powerful Mrs. Coulter: (5:32) Ruth Wilson discusses the complexity of her character and her journey over two seasons.

The Subtle Knife: (3:21) Discusses season two as well as book two and a little about the knife.

I continue to love what HBO is doing with this series, and after I’ve seen a slight decline in quality TV in the past year, His Dark Materials is definitely something I’ll remain excited about despite the long wait till the third and final season. This is a fun one to binge; this is just about the biggest scale TV series I’ve seen that’s on par with The Mandolorean and Stranger Things. If you are looking for a show that’s fun for the whole family but doesn’t treat its audience like 6-year-olds, this is definitely worth checking out.

Brent Lorentson is a horror writer and film critic based out of Tampa, Florida. With a BA in Digital Film, he co-wrote and co-directed Scavenger Hunt. His short stories have appeared in various horror anthologies. In 2019 his short script Fertile Blood will be a part of the anthology horror film Slumber Party. He is currently working on his first novel A Dark and Secret Place set to be released in late 2019. Favorite Films: Taxi Driver, Fight Club, I Saw the Devil, The Wild Bunch, Dawn of the Dead, A Clockwork Orange, Pulp Fiction, Heathers, The Monster Squad, and High Fidelity.
The Walking Dead: World Beyond – Season 1 Ferris Bueller’s Day Off – Steelbook (Blu-ray)