Posted in: Disc Reviews by Jeremy Butler on August 27th, 2021 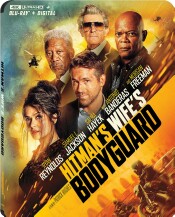 To preface this review, I feel I should tell you just how big a fan I am of the original film (The Hitman’s Bodyguard). It’s a movie that I have watched more times than I can count. There is something about that film for me that just works. Maybe it is the chemistry between Samuel L. Jackson and Ryan Reynolds, the way that they perfectly play off one another. Perhaps it’s that there is an air of philosophy to it, where they both argue that their occupation is just and the manner in which they argue it is so passionate that you can see both sides of the argument. Maybe it’s just the fact that it was chock full of action. Either way, suffice to say this movie holds a special charm for me. Unfortunately, the same can’t be said for the sequel, which in my opinion was an unnecessary cash grab. This is evident by the film’s presentation, because while the themes that made the first film great are all there, the execution is choppy and rushed, destroying what could have been a really great sequel.

The film picks up an unspecified time after the first film. Michael Bryce (Reynolds) is still in shambles. Bryce, a former AAA rated licensed protection agent, who lost his license following the death of a client as a result of Darius Kincaid (Jackson), a prolific hitman, awaits the decision on whether his license will be restored. Despite delivery on his promise of safely getting Kincaid to The Hague in order to secure his testimony against a war criminal, as well as taking a bullet for Kincaid in the process, Bryce is no better off. Compounding matters are his recurring nightmares about Kincaid interrupting his speech at the Bodyguard Awards (yes, apparently those are a thing). On the advice of his therapist, Bryce takes a break from bodyguarding, which is so wound into his identity that it is difficult to tell where he begins and bodyguarding ends.

Just as he is about to relax, a full assault on his resort pulls him back into the life, as Sonya Kincaid (Salma Hayek), Kincaid’s wife, comes for him after her husband has been kidnapped. Forced to help rescue Kincaid again, Bryce learns that there is more going on than Kincaid’s kidnapping (besides, Kincaid essentially saves himself, because as he says, “his thing is just better than everyone else’s thing.”), causing Bryce to find himself wrapped up in a deeper conspiracy that threatens the whole of Europe.

Apologies for the info dump, but all of this information is featured in the film’s trailer, so I wasn’t breaking new ground. The fact that all this information, which amounts to about the first fifteen minutes of the film, was all in the trailer turns out to be a good and bad thing. Good because a pet peeve of mine is when trailers basically tell the whole movie, so having all the trailer scenes happen earlier meant that there was the chance for a mystery plot. This is the case, as this is where the conspiracy against Europe comes into play. Prior to the screening, I was unaware of Antonio Banderas’ role in the film. I mean, I think that there was a quick glimpse of him in the trailer, but with the blond hair, I didn’t recognize him. Either way, his character was squandered, as I never felt like we got a good sense of his motivations. Yeah, sure, he is a bit of a patriot, but I think this character needed to be fleshed out more. At least with Oldman’s character, we knew what he was about; he was a war criminal on trial who was working towards regaining power. Here, all we know of Banderas’ Aristotle Papadopoulos is that he is a shipping tycoon and that sanctions are affecting his business, and for this he intends to bring down all of Europe. It just feels paper-thin as far as villainy goes. Now, if he was using his attacks on Europe towards a specific goal, as it seemed he was during the beginning, that would have helped matters.

There is also the notable absence of a cast member in the sequel that disrupted the balance that was established in the first film. In the first film, you had two badass male characters and two badass female characters. Here, one badass female is missing: Elodie Yung, who played Interpol agent Amelia Roussel, Michel Bryce’s former girlfriend, who seemed to be becoming his girlfriend again by the end of the first film. This absence is never addressed, and it throws off the film as well as the Bryce character. In the sequel, Bryce is neurotic to the point of being annoying. Granted, the character was also a bit anal with all his rules, but it was balanced out by his skills and his quick wit. Here, the character just feels diminished to the point that he is pathetic. Here he is little boy lost. We still get flashes of the original Michael Bryce, and in those moments, I’d get excited, but they didn’t last; eventually he went back to little boy lost. The film attempts to explain this with some back story, similar to how we got Kincaid’s backstory in the original film, but unlike the Kincaid story, which was relatable, the Bryce story was so outlandish and ridiculous that it further damaged the character.

Additionally, the film falls victim to the too-many-cooks-in-the-kitchen principle. While having Jackson, Reynolds, and Hayek all occupying the screen at the same time seems like an awesome idea, that much star power starts to feel competitive as they begin to pull focus for one another. Also, Jackson’s character felt diminished, as he didn’t get as much screen time as I hoped. I’m used to seeing Jackson dropping bodies as Kincaid and being unkillable. We only really got one rampage moment with him, and I expected more. There is still chemistry among the cast, but it is best displayed when only showing two of the main characters on the screen at the same time, whether it be Bryce and Kincaid, Kincaid and Sonya, or Bryce and Sonya, but when it’s all three, not so much. As I said, they start to divide focus.

The Hitman’s Wife’s Bodyguard is presented in its original aspect ratio of 2.39:1. The ultra-high-definition image presentation is arrived at with an HEVC codec at an average of 50 mbps. This is one of the good-news-bad-news kind of image presentations. There is absolutely a pretty good bump in the detail. Colors pop just a bit better, particularly in the outside location scenes. Black levels give you that much more shadow definition and a nudge better contrast. The bad news is that the ultra-high-definition image presentation brings out some flaws in the original material that got glossed over on the big screen and on Blu-ray. Some of the computer-generated stuff was obviously not rendered at the same resolution as the rest of the movie. There are also some issues of soft focus or just downright blur. Take a look at some of those action scenes, and I have to ask myself what was going on with the equipment here. It’s an action comedy, so it’s not that much of a distraction, but a little bit of a disappointment.

The Atmos track defaults to a really solid 7.1 mix. The surrounds are going to be busy throughout. There’s a lot of stuff going on here and there are moments when the film is truly manic. The surrounds do a pretty solid job of bringing all of that into your home theater setting. The subs weren’t quite as engaging as I might have hoped for or expected. There just wasn’t as much room shaking as the film deserves. The dialog is perfectly placed and clear at all times. When the film focuses so much of its attention on the banter, that’s a very good thing, and perhaps all that this audio presentation is really there to serve.

Ryan, Sam, Salma… One F’d Up Family: (9:05) This feature is all about the characters and their chemistry and interaction. Plenty of amusing moments and maybe too many clips make up the total running time here.

Gone Soft – The New Michael Bryce: (7:22) This is pretty much a continuation of the first feature with more of the focus on Ryan Reynolds and his character.

#Stuntlife: (7:47) A behind-the-scenes look at the action scenes.

While the film does pay a good deal of homage to the first film with plenty of throwback quotes and a cameo appearance from a minor character from the first film, it isn’t enough to justify this sequel. I only wish that they hadn’t rushed it, because the film had the potential to be really good if just developed a bit more and with some toning down of some of the more outlandish aspects, especially the ending, which I know was intended to be funny but just came off as asinine. Needless to say, I doubt there will be a third film, but if there is, I think I would just prefer to preserve the original film, instead of seeing it become watered down by attempts at a franchise.

Jeremy Butler is a film school graduate of the International Academy of Design and Technology. He is been writing for Upcomingdiscs since 2012; however, movies have played a big part of his life for much longer. Favorite genres include horror, science fiction/fantasy, and comedy. Favorite movies are V for Vendetta, Boondocks Saints, Kiss Kiss Bang Bang, and The Godfather.
A Discovery of Witches: Season 2 (Blu-ray) Candyman 2021