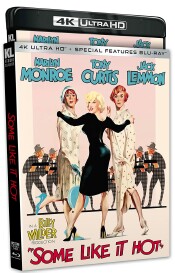 If you ever wondered just why Marilyn Monroe is the icon that she is today, all you have to do is watch Some Like It Hot, and you’ll see how she captured the attention of audiences from 1959 and well beyond to this day.  She was already a star by the time she made the Billy Wilder classic after being in films like Gentleman Prefer Blondes and The Seven Year Itch, but it’s her role as Sugar that really showcases all of her talent, though unfortunately it was the film where her troubles off screen were taking a toll on her physically and emotionally. This would also be the film that would launch Jack Lemmon’s career and be the first of many collaborations with the acclaimed writer and director Billy Wilder. Some Like It Hot isn’t simply a classic film, it is literally a piece of film history that made a profound impact on the motion picture industry, and the American Film Institute proclaimed it to be the greatest comedy of all time.

Joe (Tony Curtis) and Jerry (Jack Lemmon) are a pair of down-on-their-luck musicians in Chicago 1929 who are playing jazz clubs during Prohibition. After narrowly escaping a raid at a club they are playing, their luck takes a turn for the worse when they become the only witnesses to the St. Valentines Massacre, and the mob is after them to keep them quiet. Looking for a quick escape, Jack and Jerry find a way out and a gig that will have them performing in Florida all expenses paid. Unfortunately it’s for The Sweet Sues, an all-girls band.  Knowing their lives are on the line, they decide they have no other choice but to disguise themselves as Josephine (Curtis) and Daphne (Lemmon), and of course hilarity ensues.

The introduction to Sugar Kane (Marilyn Monroe) is memorable and borders on iconic, though for me I feel her iconic scene is when she is performing “I want to be loved by you” personally that was the moment I understood why so many before fell in love with the bombshell actress. The train sequence allows Josephine and Daphne to integrate with the band and builds on their relationship with Sugar. It’s not till the film gets to the hotel in Florida that Joe decides he wants to make an attempt to have a relationship with Sugar by posing to be a millionaire. Basically we see Curtis performing three different characters, and as a member of the audience we are just sitting back waiting for him to be found out, though seeing him put on the charade is simply so much fun.  Then there is poor Daphne, who catches the eye of a real millionaire suitor with several ex-wives, and he simply finds Daphne irresistible. Osgood Fielding (Joe E. Brown) plays the millionaire suitor, and his advances on Daphne are hilarious mostly because we know Daphne is really Jerry, but it is these interactions that do show the level of sexism of the time. I don’t believe Wilder is endorsing the behavior; instead he’s holding up a mirror and judging it in his subtle way.

Just as the Overlook Hotel is a character in The Shining, The Seminole-Ritz Hotel is almost as important.  Though the real hotel is actually the Hotel del Coronado, which isn’t in Florida at all but San Diego, California. The hotel is a beautiful backdrop for this film, and it is no surprise that the hotel has played host to the stars since its creation in 1988.

What makes this film work so well is the script. The storyline is clever especially for its time; the movie definitely takes chances that didn’t sit well with all audiences. But what really works is the dialog. I don’t think there is a bad line in this film. But the verbal tit for tat between Joe and Jerry from the beginning sets the tone for the film, and as the film progresses and the dialog is injected with innuendo, it’s more than clever; it reflects how this script is a piece of art.  Then you have Billy Wilder’s direction. The film doesn’t look flashy, but you hear the stories about the making of the film and how difficult it was to work with Monroe, who would sometimes need up to 50 takes to get a scene right. When you see the final product, everything just works. From the performances to the pacing, it’s hard to believe they had any difficulty making this film.

At this point I think I’ve seen the film about half a dozen times, and I still love it from start to finish.  Even taking a critical eye to this film, I can’t find anything to complain about, but instead I find myself more engrossed with the film. There are so many moments in this film that I love. I hold it up to films that have come out in the past decade, and there are few that match it in wit and style. The tango between Daphne and Osgood, the birthday cake scene, the rendezvous on the yacht, and so many other moments stand out and linger rent free in my brain long after I’ve watched the film.  If you’ve seen the film and it has been a while, now is as good a time as any to pick up the 4K version of the film, and if you’ve never seen the film, well, now you have no excuses; this is required viewing for any cinephile.

Some Like It Hot is presented in its original aspect ratio of 1.85:1. The ultra-high-definition image presentation is arrived at with an HEVC codec at an impressive average of nearly 90 mbps. The film was shot on 35mm so maintains a native 4K source, and that makes a huge difference here. There are not a ton of older black & white films on 4K yet and this release should prove to all of those studios out there that that’s a mistake. There’s this trend out there that there’s something inferior about black & white, and it saddens me when I tell someone about a release of an old black & white film and their reply is what difference would it make. The answer is a world of difference. The clarity alone here is worth the upgrade. The film was wonderfully restored with no artifacts, scratches, or lighting degradation. That helps to reveal an amazing amount of detail. Contrast with an HDR boost is crucial in a black & white film, and it’s all done to perfection here. This is the restoration done by Criterion years ago for Blu-ray, and it can now be fully appreciated on this Kino release. The film benefits from an expanded degree of nuance in these fuller black levels. You see details that were once honestly too dark to fully appreciate. No longer. There’s also some nice new detail to Monroe’s often glittery costumes that I never before realized were somewhat glittery at all. I never realized just how good the cinematography was on this film. For a comedy this was taken far more seriously by Wilder and his crew than I ever understood before. Most important there is no evidence of DNR anywhere in the film, and the grain remains just as it should be, adding a beautifully organic atmosphere to it all.

The film is presented in a more natural DTS-HD Master Audio 2.0 mix which is really the original mono presentation. There is also a 5.1 track, which is how I viewed most of the film while occasionally referring back to the mono mix. The expanded surround sound does not add much new separation, and that’s how it should be. It merely offers a fuller sound that was not possible originally. Thankfully no one tried to modernize the audio presentation. Still I absolutely respect the purist who wants the audio just exactly as intended, and you have that option here. It’s all crystal clear with no noise or fluctuations in volume. The audio was also restored and is as clean as anything else you have heard. Dialog cuts through just fine, while score and sound effects are just the way they were originally mixed to be.

This is a rather new way of doing things on a UHD release. Usually when there is a Blu-ray addition it contains the film AND the extras while often no extras appear on the 4K disc. This Blu-ray DOES NOT contain a copy of the film. You get only bonus material here as follows:

The Making of Some Like It Hot: (25:45)  Here we have members of the cast and crew discuss the making of the film and how the project came together with BTS footage.

The Legacy of Some Like It Hot: (20:22) The cast and crew discuss the impact of the film decades later with a collection of interviews from the 25th anniversary and more current.

A Nostalgic Look Back: Documentary (31:13)  This is a fun interview between Leonard Malton and Tony Curtis as they discuss the making of the film and some very candid stories from the set.

Memories From The Sweet Sues: (12:03) Members from the all-female band discuss their experiences with the film.

Virtual Hall of Memories: (21:04) This is a blend of footage from the film and BTS footage that highlights the performances and memorable scenes of the film.

Billy Wilder and Volker Schlondorff Discuss Some Like It Hot: (14:35) This interview is later in Billy Wilder’s career as he reflects on the making of the film and the difficulty of working with Monroe.

More with Billy Wilder and Volker Schlondorff: (6:03) This has more footage from the above interview that puts more focus on Wilder’s reaction to Monroe’s death.

Tribute to I.A.L. Diamond: (2:08) A brief moment where Wilder is at a ceremony giving thanks to his long-time writing partner.

Billy Wilder Trailers:  A collection of trailers from Billy Wilder’s career most of which are his comedies or projects he did with Jack Lemmon.

I love this film from start to finish.  Billy Wilder is one of the all-time greats when it comes to filmmaking.  He has a laundry list of classics on his resume, and Some Like It Hot is right up on the top of the list alongside The Apartment and Sunset Boulevard. This might be his most accessible film when it comes to audience appeal. It has a bit of everything: romance, action, and comedy.  There is a reason why AFI awarded this as the greatest comedy of all time. The jokes don’t get old, the film hits its mark even after all these years, and I imagine it will for decades to come. “Well, nobody’s perfect!”

Brent Lorentson is a horror writer and film critic based out of Tampa, Florida. With a BA in Digital Film, he co-wrote and co-directed Scavenger Hunt. His short stories have appeared in various horror anthologies. In 2019 his short script Fertile Blood will be a part of the anthology horror film Slumber Party. He is currently working on his first novel A Dark and Secret Place set to be released in late 2019. Favorite Films: Taxi Driver, Fight Club, I Saw the Devil, The Wild Bunch, Dawn of the Dead, A Clockwork Orange, Pulp Fiction, Heathers, The Monster Squad, and High Fidelity.
Village of the Giants (Blu-ray) Spine of Night, The (Steelbook) (UHD Blu-ray) (4K)