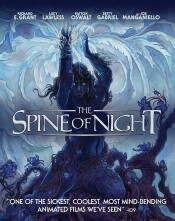 You just have to watch a few minutes of this film to get what the filmmakers were going for, and if you’re a fan of 80’s sword and sorcery films, i.e. Conan The Barbarian, Red Sonja, this will certainly whet your visual appetite. But then if you also happened to be a fan of the animated films Heavy Metal, Ralph Bakshi’s The Lord of the Rings, and Fire & Ice, then The Spine of Night is going to be cinematic catnip that will satisfy your geeky cravings. But if none of the films I mentioned above excite you, well, you might want to shuffle along, because this film just isn’t for you. Honestly, I was even on the fence with this film, but then I had to think of the teenage version of myself, and, well, back then in the glory days of VHS, if I had this title to watch, I would have been stoked to come across it. So just what is The Spine of Night?  Well, it’s a love letter to a genre that simply doesn’t exist in the mainstream anymore, but it obviously still has its fans, and who knows, maybe a cult following with this film can help revive the genre.

Tzod (Lucy Lawless) is the swamp witch/queen who gets her power from a very rare blue flower of Bastal.  She has her powers stripped from her and is left for dead while Ghal-Sur (Jordan Douglas Smith) takes the flowers and has plans to use the plant’s power for more sinister means. As for Tzod, we watch most of her journey to collect the final plant that exists but is protected by The Guardian (Richard E Grant), and she tells him her story of woe before he grants her permission to take the plant. This is a very simple explanation for what goes on in this film, and there are several smaller stories that fill up the films running time.  But it’s not so much the story that I feel the viewers are looking for, but just the entire experience of the film itself.

With Lucy Lawless taking the reins as the main character, I have to admit I thought she’d be voicing a character that would be closer to her Xena: Princess Warrior days, but surprisingly she’s playing against the type, and I liked it more because of that.  Lawless and Grant put in some solid voice work and seem to be having fun with this. The character of Mongrel (Joe Manganiello) is one of the more fun characters I wish we got to see more of.  He seems to be enjoying doing the voice work with this one, and honestly, if there was ever a live-action take on this character, he’d be a good fit for it.  But Mongrel is the closest we really get to a Conan or Solomon Kane type character, and it’s a little surprising he wasn’t the focus of this film.  Then there is Patton Oswalt, who seems to be phoning this performance in.  Now because of the animation style, we don’t get a full range of emotion with the characters on a visual level, which is sort of frustrating.

This is a really violent film, and even with it being animated, this is filled with such an array of death and carnage that it is no surprise the Shudder scooped this title up to release it.  This is one of those animated projects I think everyone would love to see in live-action form and allowed to breathe with a longer running time, because there is just so much exposition thrown at the viewers, and the stories bounce between so many characters that it is a little difficult to follow.  But when it comes to the numerous battles and gory ways characters are dispatched, well, it’s at least fun to watch.  There is a short story about two young lovers who get caught in the middle of the ,and it’s really the only time the film seems to want to have a little “heart” injected, but just to warn you, it doesn’t last long.

The most remarkable thing about this film is how the film was made.  Roto-scope has been around for a while, but it’s pretty much a style that is ignored by most filmmakers and studios because it is a tedious and time consuming process.  Imagine having to animate a film frame by frame from video previously captured.  When animation studios have a fully staffed department this was still a process that would take a while, but with the creative team behind The Spine of Night, well, this was a bargain-basement independent project, and it’s no surprise it took 7 years to complete the process.  This shows just how much of a labor of love this film was to these creators, and honestly, I respect these guys for this kind of dedication.

Spine Of The Night is presented in its original aspect ratio of 1.78:1. The ultra-high-definition image presentation is arrived at with an HEVC codec at an average of just 25-30 mbps. I’m not sure there is any reason to own this on UHD. The transfer is pretty much identical to that found on the Blu-ray with comparable bitrates, and there is no HDR or Dolby Vision to be found here. That means colors and black levels are pretty much what you might find on an HD copy. The image appears to be at most a 2K source, so we’re talking about an upconvert, and not a very good one.

The Dolby Digital 5.1 audio is also identical in specs to that of the Blu-ray. The audio presentation is mainly there to serve the dialog, and that is done well enough. Surrounds give us a hint of wind and plenty of squishy gore. Don’t look for anything too dynamic to come out of the subs. There a little bottom during some of the high-action scenes, but it’s overall pretty disappointing for a UHD release.

The Making of Spine of Night: (29:49) This is a pretty in depth look at what went into making the film from concept to final project.  I gained a lot more respect after seeing what it took to make this and the amount of years it took to complete.

This film isn’t for everyone.  As I’ve gotten older, my love for animation has started to dry up, but I do still love a fun sword-and-sorcery film.  The fantasy elements are what kept me hooked with this film, and it has me wishing that someone would doing and 80’s style Conan film blending practical FX with today’s technology.  Plenty of fans of Dungeons and Dragons will embrace this. I doubt this will have a wider appeal, but kudos to Shudder for taking a chance on this title.

Brent Lorentson is a horror writer and film critic based out of Tampa, Florida. With a BA in Digital Film, he co-wrote and co-directed Scavenger Hunt. His short stories have appeared in various horror anthologies. In 2019 his short script Fertile Blood will be a part of the anthology horror film Slumber Party. He is currently working on his first novel A Dark and Secret Place set to be released in late 2019. Favorite Films: Taxi Driver, Fight Club, I Saw the Devil, The Wild Bunch, Dawn of the Dead, A Clockwork Orange, Pulp Fiction, Heathers, The Monster Squad, and High Fidelity.
Some Like It Hot (UHD Blu-ray) (4K) F/X | F/X 2 Double Feature (Blu-ray)