Posted in: No Huddle by Jeremy Butler on February 25th, 2022 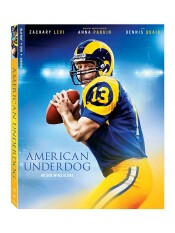 “Over a million athletes play high school football every year in America. Each with a dream of their own. Only about five percent of them make it to college ball. And only one percent of those get drafted to the NFL. Most don’t stay in the league for more than three years. Most are not quarterbacks. Only a select few will ever play in the Super Bowl, and each year, there is only one MVP of that game. So, by all accounts my dream, my story is impossible. That’s just the kind of story this is…”

That is quite possibly the best opening monologue that I seen in a long while, and the fact that the man that this film is based on was the one to deliver it just made it all the sweeter. Kurt Warner. If you are a football fan, that is a name that you undoubtedly heard. Even if you only have a passing knowledge of football, enough that you speak it articulately with some, chances are you’ve heard of Kurt Warner. If you haven’t heard of him, allow me to give you brief overview about him: he is an NFL Hall of Fame inducted quarterback, who is widely considered the  greatest undrafted player to ever have played the game. He played for the then St. Louis Rams and led their first Super Bowl victory in 2000, picking up a Most Valuable Player award for himself along the way. The list of accolades goes on, but for your sake, I think that should give you a pretty good overview of who he is. I’d say with those kinds of achievements, he is worthy of biographical sports film being made about him. Lo and behold, here we are with American Underdog.

The film is based Warner’s 2009 memoir, “All Things Possible: My Story of Faith, Football, and the First Miracle Season.” Zachary Levi of Chuck and Shazam fame has the privilege of portraying the character, and it is hard to deny that the two favor one another in the looks department. It’s far from identical, and a majority of it is likely due to hair and makeup, but even still it is worth noting their similarities. Joining Levi is Anna Paquin as Warner’s wife, Brenda, and rounding out the cast is Dennis Quaid as Dick Vermeil, former head coach for the St. Louis Rams.

So the first thing I always try to determine with autobiographical films is how close they are to real events. Based on my own familiarity with the subject of the film, as well as some independent research, I would qualify this film as among one of the most historically accurate films that I’ve ever reviewed. Obviously, there are some subtle changes for the sake of runtime and sensationalizing the real events. I mean, reality is never as entertaining as fantasy, but for the most part, I saw only minor deviations from truth, such as pushing back when Warner started for the Rams (the film depicts it as the Rams 1999 season opener, but in reality his first start was during week 17 of the 1998 season). The reason for this shift was likely due to his less-than-perfect initial start, given he only completed 4 of 11 attempts and threw for only 39 yards. I suppose including this could have been used to showcase the adversity that Warner overcame, but we already have plenty of that. The film doesn’t shy away from showing the obstacles he faced on his way to glory, such as him going undrafted, him working overnight stocking shelves while living in his girlfriend’s basement, and him failing to make the team during a tryout. I understand that it is technically rewritten history to cast things in a more flattering light, but as I said there is plenty of adversity already in the film, so I understand exclusion of his lackluster performance in favor of setting things up on a high note. All in all, it doesn’t change the context of the overall story.

Adversity is a huge component of the film, and they pile it on, as we witness Warner suffer setbacks in his professional and personal life. At times, it felt like he was carrying the weight of the world on his shoulders, but this is where Levi shines, as it never looked like imitation. He looked like he was truly going through every bit of it. It made you root for him, which made everything all the better as we watch things take the eventual turn that history has already told us was coming. Even then, the film does just let you off the hook easy, as Warner finds himself conflicting with Mike Martz, who is very clear that he doesn’t believe he has what it takes. This situation comes to a head perfectly in Martz’ office, when Levi as Warner has to justify why he should be given a shot to lead a team that Martz characterizes as, “having one of the most complex offenses ever built…by me.” This scene quite possibly was my favorite of the film, as Levi delivers a speech in which he states that “it’s my time.” By the time he’s done speaking, I was, like Martz, convinced.

Needless to say, I was a fan of this film, and I thoroughly believe that anyone who chooses to watch it will be too. Even knowing where the story will inevitably end up, it was entertaining to watch it all unfold. It really was an inspirational tale of what could be accomplished by keeping the faith and committing to a dream. If my daughter actually liked football, I’d use it to impart that important life lesson. Unfortunately, I’m just going to have to hope that someone on TikTok can convey the same message as eloquently as this film did.

Jeremy Butler is a film school graduate of the International Academy of Design and Technology. He is been writing for Upcomingdiscs since 2012; however, movies have played a big part of his life for much longer. Favorite genres include horror, science fiction/fantasy, and comedy. Favorite movies are V for Vendetta, Boondocks Saints, Kiss Kiss Bang Bang, and The Godfather.
F/X | F/X 2 Double Feature (Blu-ray) John Carpenter’s Escape From L.A. (UHD Blu-ray) (4K)