Posted in: Disc Reviews by Michael Durr on February 25th, 2022 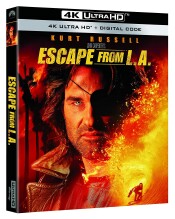 Despite my tender age, I didn’t see Escape from New York until I was in my early twenties. My parents never talked about it, my college friends didn’t seem to care, and the Internet wasn’t nearly as prevalent as it is now. But it has become my favorite movie of all time. What’s curious is that the sequel to the film, Escape from L.A., is what introduced me to Kurt Russell and the character of Snake Plissken (and became the foundation of everything I consider to be “cool”).  It holds a giant chunk of my movie heart, and I’m glad today to bring you this review of the UHD Blu-ray from Paramount. It is 1998, and hostile forces inside the United States are growing strong.  Los Angeles is ravaged by crime, and the US Police Force is formed to keep the peace. A political candidate (played by Cliff Robertson) emerges and predicts a millennium earthquake that will destroy Los Angeles in divine retribution. An earthquake measuring 9.6 on the Richter scale hits at 12:59pm on August 23rd in the year 2000.

The presidential candidate becomes President and shortly after becomes President for his life term. He relocates the capital from Washington DC to his hometown of Lynchburg, Virginia. Los Angeles is no longer part of the United States. As a part of Directive 17, all unfit people would be sent there indefinitely behind the Great Wall with no chance ever of retribution. Unfit people could be anybody the President decides, from criminals, murderers, to simply people based on their religion and red meat consumption. Yes, eating a steak in the 21st century could be grounds for exile.

We fast forward to the year 2013.  It is a special day at the deportation center. They have caught the notorious Snake Plissken (played by Kurt Russell) for 27 moral crimes against the country. The duty sergeant (played by Peter Jason) takes Plissken around as he describes the process.  He then asks the war hero if he would like to say one more thing in front of the camera before going into the compound. Plissken simply says, “Call me Snake”, as he is pushed inside.

In the compound he is led down the hallway to several offices. A woman officer bumps into Snake on the way and scratches him on the top of his hand. Snake is placed in a room for holding, and soon Commander Malloy (played by Stacy Keach) and Brazen (played by Michelle Forbes), a young female officer, enter the room.  Snake takes one look at them and realizes something is not right.  He knows that there is a deal and wants to hear it immediately.

The deal is explained. The president’s daughter, Utopia (played by AJ Langer) hijacked Air Force One and fled to Los Angeles. She had on her a dangerous prototype that could alter the very world as we know it. The daughter is linked to a Peruvian terrorist known as Cuervo Jones (played by Georges Corraface), and it could mean disaster for the United States and possibly the world if prototype is not retrieved.

If Snake goes to L.A. and the box is retrieved in ten hours, Snake Plissken will be a free man, and all of his moral crimes against humanity will be wiped clean. In addition, he is asked to dispose of Utopia, since she is a traitor against her own country. Snake balks at the idea but then is reminded of the woman who scratched him in the hallway. It seems that he was infected with the Plutoxin 7 virus, which will kill him within 10 hours if he doesn’t receive a cure.

The path now is simple: Snake Plissken will take a one-man submarine into the heart of Los Angeles. He will locate one of the US agents stationed there for information who will help him to find Utopia and Cuervo Jones. Snake will regain the black box and the prototype and get rid of the daughter. He will then escape from L.A. and get back home, all within ten hours, or else he will suffer from complete nervous system breakdown and die. It sounds easy, but we know that nothing is ever as it seems when Snake is fighting for his life.

I first saw this film in the theater nearly 25 years ago and have seen it probably about a dozen times in various formats. I always found it to be a solid film, full of action and adventure. Kurt Russell is amazing in the role he was born to play as the cool and rugged Snake Plissken. He owns the screen and has a solid supporting cast where every actor and actress play their parts far beyond the material given by the director, John Carpenter.

We have already mentioned the likes of Stacey Keach, Georges Corraface, and Cliff Robertson, but that’s only the beginning. We get Steve Buscemi, who plays a tour guide/agent known as “Map to the Stars Eddie”.  There is Peter Fonda, playing a washed-out surfer who helps out Snake. Finally, Pam Grier shows up as Carjack Malone, I mean Hershe Las Palmas, a transgender woman who leads the rebel forces against Cuervo Jones. Don’t forget the fantastic cameo from Bruce Campbell, either.

A lot of people tend to beat up on this film citing its camp qualities, disappointing visual effects, and the infamous surfing scene where Snake rides his surfboard behind a mess of green screen and insufficient camera work. While I still think the basketball scene might be worse than the surfing, I do understand the shortcomings and criticism that the film has had for many years.

However, strip those two scenes away (or as we learn in the video section, do some great re-mastering) and we have a solid action film with a great story and satisfying conclusion. There is also some unintentional commentary on the state of the world today. Think about it — an overbearing president with leaders who want to tell us how to live our life and what we should and shouldn’t be doing. Where exactly is Snake Plissken when you need him?

Escape From L.A. is presented in its original aspect ratio of 2.35:1. The ultra-high-definition image presentation is arrived at with an HEVC codec at an average of 70 mbps. This is a nice image presentation. In some ways it’s actually too nice. The source material is 35mm film, so it’s therefore a native 4K movie. The exception is that particularly in the 90’s computer-generated shots were HD, maybe 2K at best, and the difference in some of those shots truly stands out here. The surfing scene looks pretty brutal, as does some of the hang glider stuff. On the flip side, the enhanced colors and black levels are working overtime. That fiery helicopter in the dead night sky is a brilliant example of contrast and rich black levels giving off nice shadow definition. At the same time the fire is bright and vivid without ever stepping into any of the surrounding black. The level of detail here will have you seeing Snake in an entirely new way along with some of the crazy clothes. There are a ton of close-ups here, more than I remembered, actually, and that’s some sweet facial detail right there.

There is only a DTS-HD Master Audio 5.1 audio track pretty much in line with the original Blu-ray release. While it was one heck of an audio presentation then, it’s more of a disappointment now. The film still rocks. Subs engage nicely during explosions, and the surrounds wing about you during the gun fights. I was actually particularly impressed with the opening catastrophe scenes. They rumbled quite nicely in my theatre. Dialog cuts through and the score always lands at just the right space in the mix.

Only a trailer. There is no Blu-ray copy of the film.

This film was ultimately considered a bomb with a budget of 50 million dollars and only getting half of that total back as box office receipts. However, I would venture to say that in those twenty-plus years since then, it has sold plenty of copies on every format from Laserdisc to DVD to Blu-ray to now UHD/4K.  Just maybe by now it has actually turned something close to a profit. It certainly has cult-like status and is appreciated by many people for its high adventure and iconic character. As much as I enjoy Escape from L.A., I have always seen it as a movie that rested solely on the back of Kurt Russell. A passion project as it were, and given John Carpenter’s distaste of sequels, it never got the level of attention perhaps it should have.

Michael Durr has been reviewing movies for the better part of fifteen years now. He primarily enjoys thrillers, sci-fi, animation and even a little courtroom drama. His favorite films include Escape from New York, the Goonies and anything with Alyssa Milano. When he’s not praising Kurt Russell as the greatest actor of our time or scratching his head over a David Lynch flick, he’s spending time at home in Texas with his lovely wife, Lori and his amazing son. How they put up with him is a mystery, but even Basil Rathbone doesn’t have the time to solve that one.
American Underdog (Blu-ray) The Green Mile (UHD Blu-ray) (4K)