Posted in: Disc Reviews by Brent Lorentson on February 25th, 2022 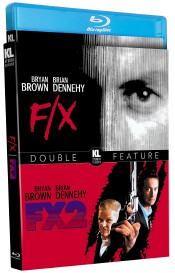 Kino Lorber has put together a fun double feature pairing the films FX and FX 2 for their Studio Classics line. These films are a bit of a relic of the past considering how much Hollywood has strayed away from the days of using practical effects to the more modern approach of CGI. Sure, when using CGI you can create just about anything the brain can imagine with the aid of a computer, but there is something about latex, props, and actual sets that have always made movies come alive and feel more grounded in reality. These effects wizards are capable of pulling off almost as much as anything a computer can, but it’s the supplies and setup on set that has made CGI a more acceptable approach in the industry. Over the years special effects and makeup artists in the industry have been contacted by the government to enlist their help in special operations. The film Argo (2012) explored this nearly a decade ago, but going a little further back to 1986 with the first FX film we got to see a fictionalized account of a “what if?” scenario, and the result was a fun film that spawned a sequel and even a TV series.

In this film, Hollywood special effects genius Rollie Tyler (Bryan Brown) is contacted by the Justice Department to help them stage the assassination of a crime boss, played by Jerry Orbach.  As you would expect, things don’t go as planned, and Rollie finds himself being fingered as the trigger man, and if he has any chance of staying alive and out of prison, he has to use his unique set of skills to uncover the culprits.

This is a really fun film, and every time we get to see Rollie in a new disguise or pulling off some crazy effect, well, he’s more impressive than Macgyver (and Macgruber). Where the film makes a mistake, in my opinion, is by introducing Detective Leo McCarthy (Brian Dennehy) as a detective who originally arrested the crime boss, but now after hearing he is gunned down is trying to figure out what went wrong. This character is brought in nearly 45 minutes into the film and somewhat slows down the pacing of the film in my opinion. You’d expect these two to team up, but that just doesn’t really happen till the end, and more so in the sequel.

The most impressive sequence in the film revolves around a car chase in Rollie’s van as he’s attempting to shake a police pursuit and he needs to use some of his tools from his trade to aid in this escape.  Hearing that the chase may not have been in the film if not for a last-minute  investment from the studio after seeing early footage cut for the film is one of those Hollywood blessings in disguise. Another problem is with the final act. While it is entertaining, it feels a bit rushed, but to a degree the sequel somewhat makes up for it.

No longer working in the film business, Rollie now has set his skills on creating robotic toys that can do some pretty clever things, though one could expect these toys would cost a pretty penny. This time around Rollie reluctantly lends his services to the NYPD  to help catch a serial killer. As you’d expect, things don’t go as planned,  and as a result a detective is killed in the process.  The detective happens to be the ex-husband ofthe woman he is seeing, and Rollie feels even more responsible for finding the detective’s killer.

Rollie reaches out to his old friend Leo, who has now becoming a private investigator, and together they get to work at finding out what is really going on. It turns out  the detective was working a case involving gold medallions made by Michelangelo that are expected to be worth millions; the trouble is they don’t know where to find them.

The highlight of this film is definitely a sequence that has Rollie in a supermarket having to use his creative ingenuity to use supplies in the store to fight off a relentless thug. This sequence is obviously trying to top the chase sequence of the first film, but it just doesn’t have the fun creativeness of the chase. This film falls prey to the same mistakes we typically see in sequels, but thankfully the one thing that does work is the chemistry between Brown and Dennehy.

This time around the film just isn’t as fun as its predecessor and is a bit harder to believe, especially when it gets to how it all ends, but that’s beside the point; the focus is on the journey of getting to that final showdown. This sequel takes to many artistic liberties that are just too hard to believe, down to why a homicide detective would be concerned about the medallions in the first place. When considering this was penned by Bill Condon and is listed as the project he wrote before Gods and Monsters and later Chicago, well, let’s just say he made an impressive curve in his writing since FX 2.

FX / FX 2 are presented in the aspect ratio 1.85:1.  The 1080p image is arrived at with an AVC MPEG-4 codec at an average of 25 mbps.  These are decent remasters. FX 2 looks better between the two. At times in the low light or night scenes some detail is lost, but it doesn’t ruin the experience. The daytime shots look good, though a bit saturated at times, but I think this is due more to the age of the print or negative. There are no digital artifacts or compression issues.

Both films use the DTS-HD Master Audio 2.0 track. The audio is balanced, so you get the action, the dialog, and the score coming out in equal parts.  I don’t have any complaints about these tracks considering the time that the films were made.

Interview with Director Robert Mandel: (14:02) In the interview he discusses how he became involved with the film and his experiences with making the film.

The making of FX: (14:10) A fun inside look at the making of the film with a focus on how they created the opening sequence.

The Making of FX 2: (6:31) A standard promo BTS look at the making of the film with interviews with the cast.

Sure, the first film is better, but these two films make for a fun late-night double feature.

Brent Lorentson is a horror writer and film critic based out of Tampa, Florida. With a BA in Digital Film, he co-wrote and co-directed Scavenger Hunt. His short stories have appeared in various horror anthologies. In 2019 his short script Fertile Blood will be a part of the anthology horror film Slumber Party. He is currently working on his first novel A Dark and Secret Place set to be released in late 2019. Favorite Films: Taxi Driver, Fight Club, I Saw the Devil, The Wild Bunch, Dawn of the Dead, A Clockwork Orange, Pulp Fiction, Heathers, The Monster Squad, and High Fidelity.
Spine of Night, The (Steelbook) (UHD Blu-ray) (4K) American Underdog (Blu-ray)