Posted in: Disc Reviews by Gino Sassani on February 25th, 2022 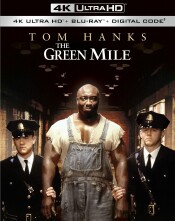 “They usually call death row the Last Mile, but we called ours the Green Mile, because the floor was the color of faded limes. We had the electric chair then. Old Sparky, we called it. I’ve lived a lot of years, Ellie, but 1935 takes the prize. That was the year I had the worst urinary infection of my life. That was also the year of John Coffey and the two dead girls.”

For me that place would be the movies. From the time I was a little kid, movies have always had an incredible fascination with me, and it’s where some of my fondest memories come from. It’s what has led me here, writing about the things I see, and it’s never lost its charm even when it became a job. Films like The Green Mile are a huge reason why that is so.

Our first, middle, and last impression of writer Stephen King has always been one thing. He’s considered the King of the Modern Horror Novel. Pretty much everything he has ever written has found its way to the small or large screen, and often with various versions over the years. The problem is that King is such a visceral writer, and his novels tend to be so long that it’s very difficult to damn near impossible to translate a good King story for television or the box office. No matter how hard some of the best filmmakers have tried, an alarming number of King’s written masterpieces have fallen flat at the box office. There have, of course, been notable exceptions. The recent two-film version of It is one of the finest of those attempts. But for nearly three decades it turned out that the most successful film adaptations of King’s written work weren’t horror stories at all. They were also based on shorter works instead of those multi-thousand-page novels. Stand By Me, based on the novella The Body, is one of the most endearing and enduring, and while a title like The Body certainly carries the King ominous connotations, it’s actually a quite unscary coming-of-age story. The Green Mile took us to death row, not for a story about a demented killer about to seek revenge as a reanimated executed criminal, but a whimsical fantasy about a death row guard with a rather amazing pet mouse and accompanying story.

The story begins when an elder Paul Edgecomb (Greer) is moved by the film Top Hat, watching Fred Astaire singing to Ginger Rogers the song Cheek to Cheek. His tears bring his friend Elaine (Brent) to ask questions. These questions lead to him telling us a story that goes back to 1935 when he was the commanding officer at a prison death row block and was also played by Tom Hanks. The block was called The Green Mile, because a condemned prisoner’s journey to the death chamber is traditionally called The Last Mile, and this block’s floor happened to be a pale lime green color. There he commanded a team of correctional officers. David Morse is Brutus “Brutal” Howell. While his nickname might imply he is a violent man, he is actually quite the opposite. He’s softspoken, but a pretty big guy. He’s Paul’s right-hand man. Barry Pepper plays Dean Stanton, no relation to the actor Harry Dean Stanton, who coincidentally also appears in the film as death row inmate Toot-Toot. Jeffrey deMunn is the elder officer Harry Terwilliger. The final member of Paul’s team is Percy Wetmore, played by Doug Hutchison. He’s as bad as any of the killers on the block. He’s the nephew of the governor’s sister and gets away with pretty much anything. He can’t be fired, and his antics include taunting the condemned prisoners and eventually causing an execution to go horribly wrong, torturing Eduard Delacroix, played by Michael Jeter. Delacroix was a repentant Cajun who befriends a mouse on the block. Pay attention to that mouse, because it plays a huge part in the film by the movie’s conclusion. Finally the prison warden is Hal Moores, played by James Cromwell, who is also dealing with a wife dying of cancer, played by Patricia Clarkson.

Life goes on as usual on the block, and Paul’s dealing with a painful urinary infection. But all of that is about to change, including Paul’s infection, when a new condemned prisoner is brought in. Enter John Coffey, played brilliantly by a newcomer at that time, Michael Clarke Duncan. He’s a mountain of a man who initially scares the guards a bit. They eventually find him to be a gentle and timid soul. But they discover much more when he touches Paul and heals his infection. After Percy cruelly stomps on the mouse, Coffey is able to bring it back. Naturally a plan starts to hatch to bring this miracle to the doors of the warden in order to help heal his wife.

Coffey’s abilities go beyond the ability to heal. He seems to have precognition, and there are several moments in the film where he knows things he couldn’t have or predicts something about to happen. He shares this gift with Paul and lets him see things through his eyes, including the fact that Coffey was not guilty of the brutal child murders for which he has been condemned to death. It leaves Paul with an incredible crisis of conscience, which truly gets to the heart of the film and its emotional conclusion.

While the main cast is a first-rate cast, even the supporting players deliver here, including Sam Rockwell as the deranged Wild Bill, who creates considerable trouble for the guards at The Green Mile.

For Tom Hanks this was his chance at a bit of a redo. Frank Darabont badly wanted Hanks to take the lead in The Shawshank Redemption, but Hanks was already committed to a little film called Forrest Gump and had to turn it down. Darabont got his man this time, and it’s that nuanced casting that gives Frank Darabont two of the best Stephen King adaptations ever made. King still calls this his favorite adaptation, and with good reason.

The Green Mile is presented in its original aspect ratio of 1.85:1. The ultra-high-definition image presentation is arrived at with an HEVC codec at an average of 40 mbps. The film was shot on 35mm, and that means a great 4K source. While the bitrate is rather low for a UHD, we have to understand the film is just over three hours. There is still so much to love about this ultra-high-definition image presentation, and it’s far and away a huge upgrade from the previous Blu-ray. Don’t believe me. Both are included, and I challenge you to compare them side by side. The HDR influence brings out one of the most important style choices of the film. The material in the 1930’s has a wonderfully nuanced fade to the colors. There is an almost dreamlike quality at times. And while colors are intentionally soft and warm, the detail is amazing. You can see the sweat that almost constantly soaks the body of Coffey. The gritty detail in the cell area truly puts you in the kind of mood required to exist in that space. The electrocutions are graphic to the core. In the “present” day, colors are so much brighter and a little on the cold side without any blue tints. Throughout the film, black levels are beautiful. You get excellent shadow definition against some of the deepest black spaces. Consider the midnight ride to take Coffey to the warden’s house. In such a pitch black environment everything is clearly visible.

The Atmos track defaults to a really solid 7.1 mix. A lot of this film takes place in some tight spaces. That certainly comes through in the mood of the audio presentation. Most of the time it is there merely to service the dialog, which it does perfectly, and to accent the subdued Thomas Newman score. There are times when the surrounds truly take over. There are a couple of significant thunderstorms that deliver a surrounding rain and full booming thunder. The subs certainly pitch in to do the work there. There are also moments of mayhem inside the block that brings out some nice surrounds. No where do these surround moments come alive more than during the botched execution.

The extras are all on the Blu-ray, which serves up the exact disc from the most recent release with all of the same menus and features. Nothing new to see here.

There was a time when everything Stephen King wrote was considered movie material. Somewhere studios were trying to figure out how to make a film franchise from his shopping lists. Most of the time the films fell massively short of the original material. The Green Mile is a noteworthy exception, as this is far superior to the King story. There are no monsters or ghouls (unless you count guard Percy). Instead, this film manages to pull on your emotions in subtle ways in contrast to King’s usual M.O. of hitting you over the head with your fears. The chemistry between Tom Hanks and Michael Clarke Duncan is magical enough to make you believe the unbelievable. An ending that at first glance appears over-the-top and contrived quickly becomes the perfect coda to a wonderful tale. And during a tale like this, “You just can’t hide what’s in your heart.”

Gino Sassani is a member of the Southeastern Film Critic's Association (SEFCA). He is a film and television critic based in Tampa, Florida. He's also the Senior Editor here at Upcomingdiscs. Gino started reviewing films in the early 1990's as a segment of his local television show Focus. He's an award-winning recording artist for Omega Records. Gino is currently working on his 8th album Merchants & Mercenaries. Gino took over Upcomingdiscs Dec 1, 2008. He works out of a home theater he calls The Reel World. Favorite films: The Godfather, The Godfather Part II, The Body Snatcher (Val Lewton film with Karloff and Lugosi, not the pod people film), Unforgiven, Gladiator, The Lion King, Jaws, Son Of Frankenstein, The Good, The Bad And The Ugly, and Monsters, Inc.
John Carpenter’s Escape From L.A. (UHD Blu-ray) (4K) Man on the Moon (Blu-ray)