Posted in: Disc Reviews by Gino Sassani on March 9th, 2022 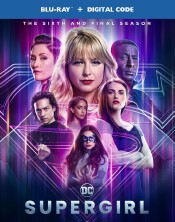 “My name is Kara Zor-El. When I was younger, my home planet was dying. Saving it was hopeless. My father sent me to Earth to take care of my baby cousin who went before me, and I thought we were the only two survivors, and that everyone else from our planet was dead, including my father. I can’t lose him again.”

They say all good things must come to an end, and for the fans of CW’s Supergirl, that end has finally arrived. Arrow started it all so many years ago and has been off the air a couple of years even though the CW DC universe has been coined The Arrowverse. The Flash will remain as the likely flagship for the joined universe with Legends Of Tomorrow, Superman and Lois, and unfortunately Batwoman keeping the last embers alive. I suspect that it will all close shop within the next two years. It’s been a good run with some exceptional superhero television and some memorable characters, but we’re in the home stretch, to be sure. But you can’t just step in after a decade of Arrowverse unseen. If you have not seen the show before, you must at least go back and check out the previous five seasons. It’ll be worth the time. You can also take a look at all of our reviews of Supergirl here: Supergirl Reviews.

Like almost every television and film production over the last two years, COVID has had an impact on the stories and pace of this final season of Supergirl. The fifth season did not get completed, and that story had to carry over to the beginning of this season. Unfortunately, it means a couple of episodes where the story conclusions appear rushed and a bit awkward. It’s the result of trying to tie up the previous year and get to these final stories as soon as they could. We can all wish it were better, but it doesn’t change the fact that this rapid resolve is pretty much unavoidable. The gang is putting the finishing touches on their defeat of Leviathan. The first episode has the entire team deep into a battle that takes care of last season’s big bad. There’s a rather nice Wrath of Khan homage with Brainiac (Rath) sealed behind a transparent barrier separated from Mia (Maines) amid a flood of radiation. They offer an exchange very much like the famous Kirk and Spock farewell. This time Mia manages to save her love, and the good guys celebrate another one in the W column.

But that wasn’t quite the end of that story. Lex Luthor (Cryer) isn’t quite finished. He’s got a ring of satellites around the Earth that will brainwash everyone on Earth in a VR environment into loving him, and the half of the population that isn’t brainwashed get killed. He wants to “fix” the planet and pick up where the Anti-Monitor from the Crises storyline failed. The fight to stop him happens very quickly, and it’s over pretty much as soon as it begins, because again, we’re trying to get to what the new season was always intended to be, and it starts with what I imagine was originally intended to be a fifth season cliffhanger. Lex is defeated, but not before he sends Kara (Benoist) into the Phantom Zone.

So now the team is desperately trying to rescue Kara. They turn to a vampire-like alien who manages to open a portal, but they find the Phantom Zone has been corrupted and is fractured, which will make it very hard to find Kara even if they break through. Instead of a rescue, they allow phantoms to come to Earth, and now they have to stop them from infecting everyone on the planet and turning Earth into the next Phantom Zone. Meanwhile, Kara encounters two new characters while she’s looking for a way to escape. She befriends Nxylgsptinz (Sergeant), or just Nxy for short. Turns out she’s an imp from the fifth dimension like that old Superman Comics nuisance, Mxyzptlk (Lennon), who shows up later when little imp Nxy turns out to be not so much of a friend after all. The other encounter Kara makes is the discovery that her father has been alive and stuck here all this time. So while the team is trying their rescue, Kara is trying to escape.

The rescue plan calls for Brainiac and Mia to go back in time to Kara’s high school years in an attempt to get some DNA during a vulnerable moment. This will allow them to track her when they create another portal. Of course, she’s rescued by Nxy, hitches a ride back, and the second half of the season involves the fight between her and the team and eventually Lex who falls in love with the imp. Yeah, that’s what I said. You’ll have to watch it and see for yourself.

The second half of the season is a more typical story arc. You’ve seen this played out a hundred times. In order to regain her magical powers, Nxy must obtain seven artifacts that represent such concepts as courage, love, and dreams. It’s a battle back and forth to get them before she does.

There are plenty of wonderful moments for everybody this season. Alex (Leigh) and Kelly (Tesfai) are dealing with their relationship, and Kelly joins the team as the new Guardian. Andrea (Gonzalo) is fighting to get higher ratings for CATCO and wants to have Supergirl’s team be a part of the news organization like Superman is for The Daily Planet. She coins the team the Super Friends, and it kind of fits. Fans will like the nod to the old Saturday morning cartoon show I watched back in the 1970’s. David Ramsey also shows up as Diggle. He has been the one uniting force for the Arrowverse since that show left. I love Ramsey, and it’s great to see him across these shows. He even directs the episode he’s in. Lena Luthor (McGrath) discovers her mother was an evil witch and learns to cast spells so that she can contribute to the battle scenes now.

One of the brighter spots in the final season has to be young Mila Jones. She plays a young alien girl who can’t get a break in the foster care system. She’s eventually adopted by Alex and Kelly. There’s something about this little girl and her performance that is off-the-chain adorable. She might have been the biggest reason I won’t want the show to end. I hope she pops up somewhere else soon. I’m really not usually a sucker for the “cute kid” ploy, but this one is just impossible to resist. Good luck, Mila.

Finally, the season sees some nice cameos from previous characters and elements. But I’m disappointed in the finale. It suffers from the same thing that brought down Wonder Woman 84. Instead of the battles actually being the decisive factor, they tap into the global love and defeat the bad guys through the power of love. Nice sentiment, guys but it’s kind of hoaky and just wasn’t the kind of finale I was hoping for. You’ll have to decide for yourself as we say goodbye, for now, to Supergirl and her Super Friends.

Each episode is presented in its original broadcast aspect ratio of 1.78:1. The 1080p image is arrived at with an AVC MPEG-4 codec. There are 5 episodes per disc, and that helps the bit-rate somewhat. There are good production values here, and you get something better than broadcast or streaming, to be sure. Black levels are fair, and the colors do pop on this show in particular.

A Farewell Tribute To Supergirl: (24:14) The cast gather on the CATCO set and answer off-screen questions. It’s really a nice feature. They joke around a lot, and it looks like they were truly enjoying this last time together.

One more star falls from the sky. Supergirl was one that I enjoyed, for the most part. It got a lot better as the team evolved, and I even grew to like Benoist a bit over time. She grew into the role, and it was a pretty solid six years. I will miss characters like David Harewood’s Jonn the most. He didn’t get to do enough, even though he did quite a lot. I will miss both the character and the actor the most. He was truly the heart and soul of the show. If you’ve read the previous reviews, I’ve had a lot to say about him over the years. So what does this all mean going forward? “I can explain with words unless this place has a decent sound system.”

Gino Sassani is a member of the Southeastern Film Critic's Association (SEFCA). He is a film and television critic based in Tampa, Florida. He's also the Senior Editor here at Upcomingdiscs. Gino started reviewing films in the early 1990's as a segment of his local television show Focus. He's an award-winning recording artist for Omega Records. Gino is currently working on his 8th album Merchants & Mercenaries. Gino took over Upcomingdiscs Dec 1, 2008. He works out of a home theater he calls The Reel World. Favorite films: The Godfather, The Godfather Part II, The Body Snatcher (Val Lewton film with Karloff and Lugosi, not the pod people film), Unforgiven, Gladiator, The Lion King, Jaws, Son Of Frankenstein, The Good, The Bad And The Ugly, and Monsters, Inc.
Invasion of the Body Snatchers (1978) (Blu-ray) Yellowstone: Season Four (Blu-ray)