Posted in: No Huddle by Michael Durr on September 10th, 2022 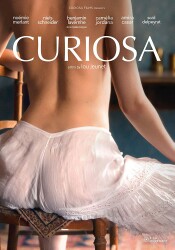 In another scene,  are introduced to Marie’s two sisters, Helene (played by Melodie Richard) and Louise (played by Mathilde Warnier), who join Marie in front of a mirror and imagine they were secretly blondes.  Later we find out that this was a two-way mirror, and Pierre is looking on until the butler asks him to leave.  (He then of course looks himself before closing the drapes.)

During the reception, Pierre is playful with all of the sisters, especially Marie under the watchful eye of Henri, who watches but does not participate.  Eventually, Marie and Pierre are able to escape to a more private setting where they engage in a passionate kiss.  It naturally gets interrupted.  After the engagement party, Pierre soon flees to Algeria, but not before he writes a letter to Henri professing his love for Marie.

Marie soon agrees to marry Henri in order to pay her father’s debt and improve her social standing.  But later in 1897, Pierre comes back from Algeria, and he is not alone.  Her name is Zohra (played by Camelia Jordana).  Zohra is anything but reserved and is very free with her body, whether it’s in front of Pierre or anyone else.  However, when Marie and Pierre meet again, they soon remember their love and their lust for one another.

As Marie finds time to escape to see Pierre, the tension between them escalates from a simple photography session into something more.  But as they try to quench their desire, Henri starts to catch on to the game.  Can they keep the secret away from peering eyes?

The good points to this film is that they certainly deliver with the beautiful female lead in Marie, and it certainly nails the eroticism.  There is plenty of spice in all of the right places, for about the first hour.  At that point, they move on to try and develop the story.  However, as hard as they try to incorporate a decent plot, it fails to reach that point of an entertaining story.

The main reason is that it never draws in the viewer is that the movie fails to paint an actual villain.  The obvious choice would be Henri, since he’s the husband that Marie is not in love with.  But he’s not controlling, he’s not mean, he only gets “aggressive” for a hot second, and all he seems to want is to go to bed with his wife.  If anything, Henri turns into a sympathetic character.

Note: If anyone is curious as to what the film would have been rated, I would go along the lines of NC-17, hence the NR on the back of the box.  Think Showgirls, think the Unrated version of 9 1/2 Weeks, and that’s where Curiosa is.

Theatrical Trailer 1:36 and Other Assorted Trailers : Marquise, Farinelli, and the Sower.

As much as this film does with cinematography and tries to faithfully recreate the time period, it just never resonates for me.  We feel sympathy for arguably the wrong character, and the two leads are spending their time in an adulterous affair under the guise of “love”.  I’m not sure either of them show me that they understand what that actually means.  Unfortunately I can’t give my recommendation here, but some of you might find the movie interesting if you are looking for a little skin.  Enjoy.

Michael Durr has been reviewing movies for the better part of fifteen years now. He primarily enjoys thrillers, sci-fi, animation and even a little courtroom drama. His favorite films include Escape from New York, the Goonies and anything with Alyssa Milano. When he’s not praising Kurt Russell as the greatest actor of our time or scratching his head over a David Lynch flick, he’s spending time at home in Texas with his lovely wife, Lori and his amazing son. How they put up with him is a mystery, but even Basil Rathbone doesn’t have the time to solve that one.
Star Trek: The Motion Picture – The Director’s Edition / Star Trek V: The Final Frontier / Star Trek VI: The Undiscovered Country (UHD Blu-ray) (4K) Final Set