Posted in: Disc Reviews by Gino Sassani on September 9th, 2022 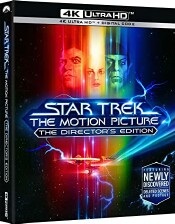 “Space … the final frontier. These are the continuing voyages of the Starship Enterprise. Its ongoing mission: to explore strange new worlds, to seek out new life and new civilizations, to boldly go where no one has gone before!”

From the moment of the first UHD releases, I have had a wish list of films I wanted to see in 4K. Most of them have finally reached my home theater video shelf, but there remain a few elusive titles that I am still waiting for. Paramount is doing a great job. The Star Trek wait is somewhat over. I say somewhat because this new release from Paramount contains the films not included in the first release: Star Trek: The Motion Picture – Director’s Edition, Star Trek V: The Final Frontier and Star Trek VI: The Undiscovered Country. But it does not include The Next Generation films.

After its shortened three-year run, it looked like Star Trek was dead and gone. A very short-lived animation series was the first attempt to carry on. Before long it too was a thing of the past. Then something rather amazing happened. Star Trek found a home in syndication. The local television markets aired the shows in a somewhat edited form, and they were rewarded with record-breaking local ratings. It didn’t take long before Paramount saw the possibilities. By the mid 1970’s there were plans to bring the original crew back for a new television series. The development name for this show was Star Trek: Phase Two. Scripts were written, sets were designed and constructed, and all of the original cast except for Nimoy were on board. A new Vulcan science officer named Xon was added to the cast. The idea was that the new Star Trek would anchor a proposed Paramount Television Network. The network idea fell through, and Star Trek was in limbo. Then George Lucas came along with his space opera, Star Wars. Fans were lining up for blocks to see the epic adventure. Science fiction had proven itself at the box office, and Star Trek was back on, this time as a major motion picture. Gene Roddenberry was back in the producer seat, and veteran director Robert Wise was at the helm. On December 7th, 1979, I was in the Fox North theaters with seven friends from 10:00 AM until after 10:00 PM for an endless marathon of…

While the film wasn’t very good, I managed to watch it eight times that first day. We dominated that front row, eating popcorn and candy all day long. It was not the film we all hoped for, but it was Star Trek, and it had been a long time since we’d seen it brand new. Star Trek had arrived once again. But the film was seriously flawed. I’ve spoken to Robert Wise about the movie, and he was quite bitter decades later. He blamed constant rewrites and Shatner’s prima donna attitude for the failure. Viewed by many as a remake of the episode The Changeling, the characters were stiff, and there was far too much admiring of spaceships motionless in space. The chemistry between the characters appeared to be lacking. Star Trek was in danger of going dark once and for all.

A giant, powerful cloud is working its way across the galaxy, leaving a wake of destruction in its path. The newly refit Enterprise is the only ship close enough to intercept it before it can reach Earth. Captain Decker (Collins) is prepared to take his new ship into the breach when his command is usurped by Admiral Kirk (Shatner) who has bullied Starfleet Command into giving him his old ship back. Along the way they encounter a Vulcan shuttlecraft containing Spock, who has decided to rejoin Starfleet after turning down the high honor of Kolinahr. When the Enterprise does encounter the threat, they are surprised to learn that it’s not seeking out Earth, but rather returning home.

The term failure is a relative one in Hollywood. An $82 million take on a $35 million budget isn’t all that bad, particularly in 1979. It would take a couple of years, but the call was heard. Star Trek deserved a second chance.

This version is brand new. Robert Wise himself oversaw a special cut of the film back in 2000. It was an improvement, to be sure, but he wasn’t able to use the modern technology of today to make it truly reflect his original vision. Wise is no longer with us, but his notes and production materials were used as a guidepost to recreate the film once again. The result is a CG model scanned from the film’s practical model and f/x that stand up against what we expect today. There are still shortcomings in the film that could not be fixed. Wise was filming from a script that was never locked down. He told me in our conversation in the 90’s that we was constantly fighting the changing story during the production itself. But this is the best version of this film available to see, and it’s very much worth the upgrade. I saw and heard things that never came out in the original. More of that in in Audio/Video section.

“You told me how envious you were and how much you hoped you’d find a way to get a starship command again. Well, sir, it looks like you found a way.”

Each film is presented in its original aspect ratio. All sport brand new ultra-high-definition transfers and now appear in full 4K quality. Unfortunately, we can’t talk about the video quality here without bringing up the controversial subject of DNR (Digital Noise Reduction) once again. There is ample evidence that there has been some scrubbing on these transfers. That doesn’t mean there aren’t some wonderful things to talk about here. It just means that the video will not be as true to the theatrical release as many of us would like it to be. Even if we could agree that removing the grain is a good thing, which we can’t. You need to understand that the DNR process is not a perfect one. When you remove some of that “noise”, you change certain aspects of the film itself. Backgrounds lose some sharpness and focus. I propose that it is a matter of maintaining the integrity of the original filmmaker’s intent. Enough, for now, about DNR. There is no question that the films have never looked better insofar as detail and sharpness. In fact, the detail works against much of the early f/x work. You’ll notice line shimmers and box outlines on ships. Colors are the real winner here. I’ve never seen any of these films look so bright and colorful before. Contrast is another huge standout. When you have such white craft against the blackness of space, it’s a real opportunity to show off a good contrast presentation, or to reveal a bad one. Fortunately, this one excels in that area as well. Black levels are superb. All were restored from the original negatives, but The Motion Picture got a full treatment here, and the results are absolutely stunning.

The Motion Picture was given a new Dolby Atmos presentation that unfolds to a brilliant 7.1 track on most systems. I usually call for restraint on classic films and expanded soundfields, but let’s be honest. This film would have sported quite a spread if filmed today. I heard bells and other instruments in the main theme that I never knew were there. The Jerry Goldsmith score is as triumphant as you have ever heard it even after seven years of its use in The Next Generation. The other two films have a Dolby TruHD 7.1 track. They are also pretty impressive, but nothing like The Motion Picture. You’ll hear sub response that I just never connected with the original films. The dialog has been obviously enhanced by the new mix with good results. The iconic incidental music is better than ever before. You get everything you’re used to, but better, in this audio presentation.

The extras are found on the Blu-ray copies of the film with the exception of The Motion Picture. For that film the Blu-ray ONLY contains extras and no film. You get a section with all of the vintage features. On the other films the vintage features and commentaries are all you get. On The Motion Picture you get a section of new features, and that’s what I’ll list here:

The 3-minute overture is restored with a new CG starfield.

The Human Adventure: (48:17) There are eight parts with a handy play-all option. The feature mostly talks about the making of this 2022 version. Of course, Robert Wise gets a profile, and there are tons of things going back to the original production, but the real treat here is seeing how they created this new version of the film.

Deleted Scenes: (4:31) There are three with a play-all option. One has missing sound.

Effects Tests: (3:30) A look at some f/x dailies from the original production.

Costume Tests: (4:40) These are my least favorite uniforms of the franchise, but if you really want to see these tests, knock yourself out.

Computer Display Graphics: (3:10) You get to see the raw 16mm and 65 mm footage shot for the ship’s monitors.

Star Trek has come a long way since its birth back in the 1960’s That first film has always been a bit of a thorn in the side of the franchise. You can’t really blame Robert Wise. I sat with him in Baltimore many years ago and was amazed at the passion he had for the film and his sense that it was still an unfinished work. And that’s the difference between what happens here and Lucas with his constant need for changes. This film had a long struggle from TV show script to film and back and forth for 18 months. The script was still being written as the film was being shot because of a release deadline Paramount felt they could not back down from. The film was released December 8th, and on Thanksgiving weekend the score hadn’t even been locked down yet. As a youngster my enjoyment was dampened by the missed expectations. We were still reveling in the fact that it was all back. The decades that followed would continue to deliver both excitement and disappointments. This release is the missing link between then and now. The features hint that elements are still being discovered. Will there be other versions in the future. “I know engineers. They love to change things.”

Gino Sassani is a member of the Southeastern Film Critic's Association (SEFCA). He is a film and television critic based in Tampa, Florida. He's also the Senior Editor here at Upcomingdiscs. Gino started reviewing films in the early 1990's as a segment of his local television show Focus. He's an award-winning recording artist for Omega Records. Gino is currently working on his 8th album Merchants & Mercenaries. Gino took over Upcomingdiscs Dec 1, 2008. He works out of a home theater he calls The Reel World. Favorite films: The Godfather, The Godfather Part II, The Body Snatcher (Val Lewton film with Karloff and Lugosi, not the pod people film), Unforgiven, Gladiator, The Lion King, Jaws, Son Of Frankenstein, The Good, The Bad And The Ugly, and Monsters, Inc.
1883: A Yellowstone Origin Story (Blu-ray) Curiosa