Posted in: Disc Reviews by Michael Durr on September 28th, 2022 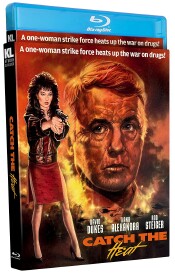 Some of my favorite movies from the 80’s and 90’s consist of films where very little brain matter needs to be used to consume the action of what’s going on the screen.  The type of films I’m talking about are films like Bloodsport, Above the Law, the Perfect Weapon, and Rapid Fire.  Now, from reading those titles, it might sound like I’m a little “man” heavy so to speak but I also heavily enjoy films like La Femme Nikita or Moon Lee films  (Princess Madam or Devil Hunters for example).  Today’s film is Catch the Heat which stars Tiana Alexandra in a film where she cranks up the kick butt meter to ten.  Let’s see how it performs.

We are taken to a foggy swamp.  A truck rolls in and stops.  Danny Boy (played by Brian Thompson) looks from his vehicle and lights a cigarette.  He waits, when all of the sudden a motorbike rolls into view.  The driver takes off the helmet and its actually a gorgeous female.  Danny shows the coke, she shows the cash and they make the exchange.  But Danny isn’t quite satisfied with just cash and decides to trade some of it for a little something something (bad pickup lines and all).

The lady decides to take up Danny on his “tantalizing” offer and they make their way back to the truck.  A misdirection later and we learn that this lady goes by the name of Checkers Goldberg (played by Tiana Alexandra) and she’s not a drug dealer but a federal agent.  Out comes her partner, Waldo Tarr (played by David Dukes) to complete the arrest.  He intimidates Danny Boy and plays some Russian roulette with him to boot until he finally talks.

It’s time for some catchy music overlooking the Golden Gate bridge.  That’s how we know we are in San Francisco.  Waldo makes his way to the Kubukan Martial Arts School where Checkers is training.  He lets her know that he is going to Buenos Aires to the source of the drug smuggling ring.  There he is to find the mastermind, Jason Hannibal (played by Rod Steiger) and put him away for good.

Waldo goes to Buenos Aires where he is helped by the local police, Raul De Villa (played by Jorge Martinez) to investigate Mr. Hannibal.  After he discovers that Jason likes to act as a talent manager, he has the perfect cover for Checkers.  She will pose as Cinderella Pu, a performer who mixes martial arts with dancing.  But wait, she will also need to wear a Suzie Wong dress and wig.  Finally, she should also appear “flat” chested.  This is literally in the script by the way.  Cinderella, I mean Checkers is off to Buenos Aires.  But will she get in too deep and have to fight her way out?  I think we already know the answer to that one.

If this movie so far sounds nuts, you aren’t far off from the actual truth.  First, the good.  The film does have some excellent action sequences with Tiana who was incidentally the first female student of the legendary Bruce Lee.  Suffice to say, the film is a million times better when she is on the screen and knocking out a bad guy.  The film also for a large part of it is not taking itself seriously and knows its audience.  Sure, by today’s standards it’s far from politically correct, but it doesn’t mean that someone who grew up with these kind of films can’t still laugh at key comedic moments.

Unfortunately, the film starts being very serious at the near hour mark and descends into the boring territory.  For some reason, they want to focus more on Dukes’ character and less on what carried the first 2/3rds of the movie. I’m sorry, when you have a  charismatic person like Tiana, the last thing you want to do is make the film about the boring partner as he talks about the pronunciation of “Lobster” with the local police.

The other problem are the really horrible goofs in the action sequences of the film.  I’ll give two examples, there is a scene where we have a motorcycle driver who flies into the back of a truck and falls off.  Except when they come back to the person on the bike, they are still seated.  Or when a bunch of people walk away from the scene and then the next time we see them in a cut a few seconds later, they are getting shot in the front by the same people they were walking away from.

It also doesn’t help that the male leads, Dukes and Steiger look completely bored.  Dukes only shines when he’s put next to Tiana to be perfectly honest as they do exhibit decent chemistry together.

This movie is presented in a 1.85:1 widescreen format.  I wasn’t sure if the print was going to get cleaned up because I wouldn’t think this was in great shape to begin with.  Much to my surprise, the film looks great (and not just Tiana Alexandra either) and the scenes in San Francisco and Buenos Aires really benefit from the restoration.  Flesh tones look dead on and sure I could quibble about some minor moments, but all in all, this is a fine piece of work by the Kino staff.

The sound to this film is presented in DTS HD 2.0 Master Audio in English with English subtitles.  The audio for the most part is just as good as the picture here.  The music is a bit second rate but is actually given a new coat of life and comes to the front of this film.  Dialog has no issues, and I noticed no hiccups with the subtitles.  There is some stereo usage here but its more related again to the music and the occasional upbeat fight scene.  This should please the fans of the movie or genre greatly.

VHS Preview and Theatrical Trailer along with other Kino Trailers :  The other trailers include A Force of One, Revenge of the Ninja, Avenging Force, Murphy’s Law, Steele Justice, Hard Target & Rawhead Rex.

This film’s screenplay was actually written by Stirling Silliphant, legendary writer of films such as In the Heat of the Night as well as television dramas, Naked City and Perry Mason.  Tiana Alexandra was actually already his wife at this time and basically this was a vehicle to get her into films.  Unfortunately for her fans, she ended up getting behind the camera to be a director and producer of documentary films about her home country, Vietnam.

Catch the Heat has its share of moments for fans of female kung fu movies.  Sure it gets cornier by the minute, but there is still some fun to be had here.  Kino does a wonderful job on the video and audio restoration end.  There are no real extras sadly (Surely, they could have gotten a “film critic” to do a commentary), but at least this is easily the best the film has ever looked.  A mild recommendation if you are a fan of the genre.  Enjoy.

Note: For fans who want to know more about Tiana, go check out her website @  http://tianaworld.com/

Michael Durr has been reviewing movies for the better part of fifteen years now. He primarily enjoys thrillers, sci-fi, animation and even a little courtroom drama. His favorite films include Escape from New York, the Goonies and anything with Alyssa Milano. When he’s not praising Kurt Russell as the greatest actor of our time or scratching his head over a David Lynch flick, he’s spending time at home in Texas with his lovely wife, Lori and his amazing son. How they put up with him is a mystery, but even Basil Rathbone doesn’t have the time to solve that one.
Elvis (2022) (UHD Blu-ray) (4K) The Octagon (Blu-Ray)