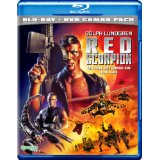 It’s no secret that they just don’t make action movies like they used to. (Sylvester Stallone just shot a brawny arm into the air in protest. I see you, Sly!) These days the odds of seeing a pretty boy like Matt Damon and a perennial tough guy like Bruce Willis headlining an action flick are just about even. You’re just as likely to see Dwayne “The Rock” Johnson in family fare like Journey 2: The Mysterious Island as you are in an manly romp like Fast Five. Heck, the Arnold Schwarzenegger role in the upcoming Total Recall remake is being played by…Colin Farrell.

Red Scorpion — a Cold War-era action flick starring Dolph Lundgren — was made during a simpler time for action movies. It was a time when a single, muscle-bound super soldier could dispatch of an entire army by himself with big guns, bigger firearms and quippy one-liners. (It was also a time when all the bad guys had particularly atrocious aim.) Lundgren stars as Lt. Nikolai Rachenko, a Soviet Special Forces officer charged with infiltrating a group of African rebels and murdering their anti-Communist leader. Rachenko’s mission hits a snag, and he starts to question whether he’s fighting on the right side.

The Swedish Lundgren — who is so tough, he once scared off burglars without even being home — is once again cast as a Russian killing machine, following his iconic work as Ivan Drago in Rocky IV. In Red Scorpion, the actor looks comically gigantic and his striking blond/Euro physical appearance contrasts nicely with the film’s African setting. Unfortunately,  Lundgren’s understated charisma is mostly wasted in a role that rarely requires him to say more than a few syllables at a time. I understand the idea is that Nikolai is some sort of modern Frankenstein’s monster, but director Joseph Zito and screenwriter Arne Olsen don’t fully commit to that notion. (More on that in the Special Features.)

That’s actually a running problem for the movie as a whole. Though it is set in the fictional country of Mombaka, the film is largely based on the civil war in Angola and inspired by freedom fighter Jonas Savimbi. Red Scorpion seems to want to say some substantial things about following orders blindly and the political unrest of the era. Unfortunately, those ideas are undermined thanks to over-the-top action sequences, some of which are inexplicably accompanied by Little Richard songs. (Woo!)

If Red Scorpion could only go in one direction, I would’ve preferred to see the movie go Commando. That would’ve unleashed a bit more of Lundgren’s personality. On top of that, the performances of M. Emmett Walsh (as a feisty, profane American journalist) and T.P. McKenna (as a dastardly Russian general) would’ve made more sense. (Al White acquits himself nicely as Kallunda, an ally of the freedom fighter Nikolai is hunting.)

Though the movie winds up being somewhat bipolar — a mystical interlude involving an African bushman and the meaning behind the titular scorpion mostly came off as an excuse for Lundgren to spend to the last 30 minutes of the movie shirtless — there are some things to admire. Make-up maestro Tom Savini provides two standout moments, including a wonderfully cringe-inducing torture scene. More importantly, it was refreshing to see actual stunts performed by actual actors in close proximity to actual (non-CGI) explosions.

I realize that, in 2012, a movie production would be insane to allow its lead actor to perform a stunt where he leaps from a fast-moving motorcycle onto a truck (as Lundgren does in Red Scorpion). Still, there’s an undeniable kick in seeing a film pull off a dangerous trick like that versus something that was obviously done using a green screen and wire work. Like I said before: for better and for worse, they just don’t make them like this anymore.

Red Scorpion is presented in its original aspect ratio of 1.78:1. The 1080p image is arrived at with an AVC MPEG-4 codec at an average of 28 mbps. The transfer for the film — first released in the United States in 1989 — shines brightest during daytime outdoor scenes depicting the incomparable African landscape. (After some delays, much of the filming took place in Namibia.) The color and contrast is strongest during these sequences. Unfortunately, many indoor and nighttime scenes look hopelessly grainy and the black levels are a bit off. A few scenes look nearly as bad as those times when you’d have to walk up to your TV and adjust the antenna to clear the picture.

The DTS-HD Master Audio 5.1 track is a superstar when it comes to sound effects — bullets pinging, trucks exploding, punches landing — during the battle sequences. There is also an impressive amount of ambient noises, a necessity for a movie set almost entirely outdoors. An ever-present Russian Hind gunship, in particular, does a nice job of filling your speakers. The only negative is that the dialogue is not always easy to understand. (Though I’d probably attribute that more to the dueling Russian, Cuban and African accents than the audio track.)

The bonus material is easily my favorite part of the Blu-ray and all special features are presented in HD.

Audio commentary with director Joseph Zito and Mondo Digital’s Nathaniel Thompson: An interesting chat that basically plays out with Thompson interviewing Zito while the film just happens to be playing in the background. Zito (Missing in Action) discusses splitting the difference between Apocalypse Now and Hot Shots! in making a war movie. (Personally, I think he would’ve benefited from picking a more clearly defined direction instead of trying to go right down the middle.) The director also remembers the production in vivid detail and talks about a lot of the film’s practical stunts and effects.

Hath No Fury — Dolph Lundgren and the Road to Red Scorpion featurette: (24:54) Lundgren discusses his career — physics and math scholarships led him to Australia, where became a martial artist and a bodyguard for Grace Jones, which led to his film debut in A View to a Kill — with a healthy perspective. He also talks about Red Scorpion with both affection and a bit of resignation. (He mentions the troubled production and an ending to the film that was replaced by a more truncated conclusion.)

Assignment: Africa — Video interview with producer Jack Abramoff: (13:26) Yes, that Jack Abramoff! The disgraced lobbyist is actually the guy who came up with the idea for the movie and made it his first film production. Despite being over budget, behind schedule and losing Warner Bros. as a distributor by filming in the South Africa-controlled country of Namibia, Abramoff has fond memories and cheerfully talks about the difficult, exciting experience of making his first movie.

Scorpion Tales — Video interview with make-up effects artist Tom Savini: (10:05) Savini — who was called in to work on the movie at the last minute — talks about his work on the standout torture scene, a gruesome exploding arm effect, and an exploding head effect that was never used in the movie.

Rare original on-set, behind-the-scenes video footage: (9:11) This footage comes courtesy of Savini, who mentioned in the previous special feature that he spent a lot of time just hanging around the set until he was needed. Savini captures Lundgren in action on the battlefield, as well as the filming of his two big makeup effect shots.

Animated still gallery: (6:57) You’ll be amazed by how many different posters this film spawned. Also includes some still shots from the set.

Theatrical trailer (1:55) and TV spots (3:08): Don’t usually comment on trailers or TV spots, but I specifically enjoyed the old-school TV spots if only for taglines like, “Some men go to war, Dolph’s just going to work” and “His looks aren’t the only thing that can kill.”

The Little Richard music notwithstanding (woo!), this movie took itself a little too seriously for my taste. More importantly, this is a case where the story behind the making of a film is infinitely more interesting than what wound up on screen.

Fortunately, the Blu-ray helps bring that fascinating behind-the-scenes story to light. Though the video transfer is only passable, the film is an interesting failure that will delight 1980s action movie junkies and…not too many other people.