Posted in: Disc Reviews by Gino Sassani on November 14th, 2012 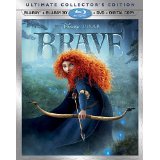 “The ancients spoke of it. It is the heart of this fierce land. It is carried in the wind. Born of our legends, and when we are put to the test, it is the one thing that we must always be.”

Readers of this site already know that I have a particular fondness for most of the films that have come from Pixar. The studio pretty much invented the computer-animated feature film, and they’ve been setting the bar higher with each new release. I’ve always thought it was rather fitting that the studio ended up as part of Disney. After all, it was the Mouse House that invented the animated feature to begin with. It all has a certain poetic destiny feel for me. Pixar is still leading the cutting edge. My favorite to date has been Monsters, Inc., and I am eagerly waiting for the Monsters University prequel, which is now only a year away. In the meantime, the powers that be over at Pixar have tossed us yet another original story: Brave.

Princess Merida (MacDonald) isn’t exactly happy with the usual life of a princess. While her mother (Thompson) tries to teach her the arts of being a lady, she is happier out in the wilderness on her horse and practicing her archery skills. She is far more enthralled by her father, King Fergus (Connolly) and his tales of facing the bear that took his leg than her mother’s stories of grace and good behavior. It all comes to a head when it is announced that the other kingdoms will be sending their eldest sons to compete in a competition for her hand in marriage. She has no intention of getting married, and to someone she doesn’t love, no less.

She follows a path of will-o’-the-wisps to the door of the local witch and woodcarver. She asks for a spell to change her mother, and she gets exactly that. This becomes a pure case of “be careful what you wish for”. The transformation leads to some quite humorous moments as Mom has turned into a bear, the thing the King wants to kill more than anything in the world. Learning her lesson, Merida attempts to help her mother and undo the damage she’s done.

Brave is the most straightforward film that Pixar has ever done. It is a standard fairy tale with most of the usual elements pretty much intact. There are ancient kingdoms, a princess, a witch (and curse, of course) and the usual cute sidekick characters in the form of the three little brothers. But this is not a completely traditional story, either. I am particularly pleased to finally see a fairy tale where the princess isn’t looking to score a major hunk. There’s no Prince Charming to be found here. Merida is as independent a princess as you’re likely to find. Pixar has managed to take a traditional tale and put their own stamp on the material.

The animation is another milestone for the industry. There is a scene where Merida is teaching her mother, as a bear, to catch fish in the stream. The scene is actually one of the weakest as the story goes, but it is visually magic. The creation of the water and the fish just below the surface is one of the most realistic scenes I’ve seen in this kind of animated feature. The textures on the bear characters are another step forward for the industry. Chalk up another stunning effort from the crew.

The characters are all engaging. Billy Connolly has one of those classic old-world voices and brightens up the otherwise droll character of the King. Kelly MacDonald does a fine job as the princess. Yes, Pixar has included their rabbit’s foot. John Ratzenberger has his usual cameo part. Here he’s a character named Gordon. You can’t miss him.

Brave is presented in its original aspect ratio of 2.39:1. The 1080p image is arrived at with an AVC MPEG-4 codec at an average 30 mbps. This is truly an impressive high-definition image presentation. The first think you’ll notice is that there are wonderful textures here. Notice the frayed edges of a tapestry that allow you to see the intricate fuzzy lines of the broken threads. There are wonderful moments where sunlight is diffused through clouds and even water spray. Combine these sharp images to the intricate shades of green that provide the Scottish atmosphere and you have a stunning image. Bear fur and hair are also remarkable. It’s detail that symbolizes the best in HD presentations with the craftsmanship that we’ve come to know as Pixar. Black levels are deep and true. Dark clouds model fine shadow definition.

The Dolby TrueHD 7.1 audio can only be described as magical. It’s the Celtic score that will move you the most in this audio presentation. The clarity and emotion of the music sets the atmosphere as much as any of the wonderful images. Dialog is spot-on. There are wonderful surround moments that also build an atmospheric mood. The spooky forest is alive with subtle sounds that immerse you completely within the magic of this fairy tale.

This is a 5-disc collection. You get a BD3D disc. 2 Blu-ray discs (Film and Features). A DVD and a Digital Copy.

The first Blu-ray film features a Commentary Track and the following features.

La Luna: (6:57) This short was shown with Brave at the box office. This one has a couple of guys teaching a young boy the ropes of their trade, and a rather stellar job it is.

The Legend Of Mor’du: (6:57) The film’s witch recounts the story of Mor’du and the shattered kingdom we hear about during the movie.

Brave Old World: (12:35) The animators were taken on a trip to Scotland to capture the mood and grandeur that they would need to recreate on the screen.

Bears: (6:10) These bears are not the typical cartoon bears we’re used to seeing in animated films. Take a look at the concept art and how these realistic animals were conceived and created.

Brawl In The Hall: (5:29) Take a look at the animation challenges of creating so many characters having a slapstick fight in the King’s hall.

Wonder Moss: (2:45) More concept and design art to illustrate the evolution of the Scottish countryside.

Magic: (7:06)  A look at the magical fairytale elements of the story.

Clan Pixar: (4:46) See the crew gather for Scottish playtime that both lets off steam and allows them all to get into the spirit of the atmosphere.

Once Upon A Scene: (7:47) Watch various paths the story took as it went from concept to film. This one focuses on those paths begun but not ultimately taken.

Extended Scenes: There is no play-all, which makes this more tedious than it needs to be. Mark Andrews introduces each of the four scenes and provides insight. A scissors icon allows you to differentiate between what was cut and what was retained in the final film.

Alternate Opening: (2:40) This alternate scene shows an encounter between Fergus and Mor’du.

Fallen Warriors: (2:08) A montage of snippets that were taken out of the film.

Dirty Hairy People: (3:33) Talk about the less-than-modern hygiene of 11th century Scotsmen and how it was portrayed in the film.

It’s English…Sort Of: (3:50) A guide to some of the Celtic phrases used in the film.

The Tapestry: (3:56) No, this isn’t excerpts from a Carole King album. This one looks at the challenges of depicting the fabric of the tapestry in computer generated images. It’s one of the milestones in the technical advancement demonstrated here.

I won’t say this is their best effort as far as the story goes. There are several I’d place above it. It’s better than the Cars films or Ratatouille by a long way. I think it’s the kind of story that will resonate with the kids a little less but be enjoyed more by the adults or adolescents in the audience. It gets my vote as the best princess in the Disney stable by far. A princess shouldn’t be so focused on finding her Prince Charming, “and above all a princess should strive for, well… perfection.”

Gino Sassani is a member of the Southeastern Film Critic's Association (SEFCA). He is a film and television critic based in Tampa, Florida. He's also the Senior Editor here at Upcomingdiscs. Gino started reviewing films in the early 1990's as a segment of his local television show Focus. He's an award-winning recording artist for Omega Records. Gino is currently working on his 8th album Merchants & Mercenaries. Gino took over Upcomingdiscs Dec 1, 2008. He works out of a home theater he calls The Reel World. Favorite films: The Godfather, The Godfather Part II, The Body Snatcher (Val Lewton film with Karloff and Lugosi, not the pod people film), Unforgiven, Gladiator, The Lion King, Jaws, Son Of Frankenstein, The Good, The Bad And The Ugly, and Monsters, Inc.
American Restoration: Volume 2 Alice: The Complete Second Season