Posted in: Disc Reviews by Gino Sassani on October 29th, 2013 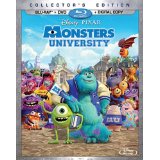 Who are “the boys”, you might ask. If you’re serious, then you might actually be reading the wrong piece. For the rest of you, “the boys” are Mike Wazowski (Crystal) and James P. “Sulley” Sullivan (Goodman). And it’s been a dozen years since we last saw them in Monsters, Inc. A sequel to that film might be a bit problematic. We learn that laughs provide far more power than screams, and we leave the power structure of Monsteropolis on its head. Pixar’s imaginative team took the best route available to them and decided to go the prequel pathway, and we get to see Mike and Sully as college students. Both have their sights on becoming master scarers. For Sulley, it’s in the blood. He comes from a long line of successful scarers, and he’s not really taking the college scene very seriously. For Sulley it’s about fun. Mike, on the other hand, has stars in his eyes and works harder than anyone else on campus. But he might have to come to grips with the fact that he just might not have what it takes.

It’s a little unfortunate that we can’t, for just a couple of hours, forget that we’ve seen the first film. So much of the enjoyment of that movie was discovering this place and these characters for the first time. Repeated viewings have the reinforcement of wonderful memories and good times. That puts Monsters University in an awkward situation. On the surface, it’s a much better movie than the first. There is more of a story here, and the characters have the advantage of having some history. That means the plot can put them into more complicated situations and allow what we already know and expect to fill in the gaps. Of course, the technology has improved no matter how impossible that might appear. The real difference is in the Sulley character. The computer-generated hair has come a long way from the already excellent detail and texture we already experienced 12 years ago. Finally, the world is somewhat known to us, and we can enjoy the wonderful population of characters which include the return of rival Randy (Buscemi), and we learn how the rivalry started. Helen Mirren is abominably delicious as the dean and foil for Mike and Sulley which ultimately brings them together. The technology of the character is also light years from anything we’ve seen before. It all makes for a superior film in many ways.

Unfortunately, Disney did not send us the 3D version to review. Monsters University is presented in its original aspect ratio of 1.78:1. The 1080p image is arrived at with an AVC MPEG-4 codec at an average 35 mbps. One of the greatest technical achievements here was the reproduction of fur and how it interacts with its environment. Until the original film such textures were largely unconvincing. The high-definition detail on this release allows you to appreciate the incredible renderings like never before. It’s not just the hair itself but the way air moves it. There are times when you really have a hard time believing this is simply animation. Colors are magnificent here. Black levels are about as deep and vividly defined as you could hope for with current technology. Lighting is one of the most incredible details in this film. The lighting informs the emotion of the story and characters. You can see Mike go from shadow to light as he enters the University grounds and his mood changes. The moonlight and flashlights toward the end of the film reveal the characteristics of shadow and light like no other animated feature before. When it comes to Pixar, I’ve said it before. It just doesn’t get any better in the image presentation.

The Dolby TrueHD 7.1 is as good as it gets. Randy Newman’s score has just the right mix of whimsical and college-band sounds. There’s a lot going on here often, and the surround separation allows these events and characters to live in a realistic space. The result is a very immersive experience. One of the things that makes Pixar so superior is that they devote as much time and effort to sound design as they do to the incredible images. You can’t realize just how much they complement each other until you try to separate them. With this film that’s just impossible to do.

There are two Blu-ray discs. The first has the feature film and an Audio Commentary.

The second disc has the remainder of the bonus features.

Campus Life: (15:14) Director Dan Scanlon takes us on a day in the life of the production on Monsters University. We get to meet the various folks from the different departments and see what their day is like from Scanlon’s arrival at 8:00 (to give him an hour of peace and quiet before the day starts at 9:00) to when everyone goes home for the night…well, not everyone.

Story School: (8:38) Story artists create storyboards that are used to try different approaches to the film. Peer review and gag sessions help to flesh out the ideas. We get some of the original discarded ideas from the early development days here. We then see how these concepts evolved into the final film.

Scare Games: (4:30) Fun times at Pixar. The departments competed in their own version of the scare games to boost morale and team building.

Monthropology: (5:47) Still not sure what the word means, but the feature looks at the many types of monsters that populate college life in the film. They even brought in a giant centipede to help with animation on the scary Dean.

Welcome To MU: (6:09) Here we see how the production design team figured out the architecture of the University.

Music Appreciation: (7:29)  Randy Newman conducts the orchestra for some recording sessions, and we get to sit in.

Scare Tactics: (5:16) This feature shows us the thought and work behind the facial expressions and body language of the scare moments.

Color And Light: (5:16) This is one of the huge strengths of the film, and I’m glad to see these guys get their props.

Paths To Pixar: (7:40) Artists talk about their lives and the decisions and events that led them to work at Pixar.

Furry Monsters – A Technological Retrospective: (4:58) Monsters Inc, was the first film at Pixar to use fur. It was a pretty major breakthrough. This feature looks back on that development and demonstrates how it evolved and was used for tons of creatures in this film.

Deleted Scenes: (22:04) There are four plus an introduction by Scanlon. Of course, it’s all done with storyboards. They feature an early elementary school relationship between Mike and Sulley to correct a continuity error with the first film, but eventually abandoned. There’s also a sub-story where both go to drama class after getting kicked out of the scare program.

Trailers, art galleries and a set flythrough finish off this impressive list of bonus features.

There is also a DVD and Digital Copy

Gino Sassani is a member of the Southeastern Film Critic's Association (SEFCA). He is a film and television critic based in Tampa, Florida. He's also the Senior Editor here at Upcomingdiscs. Gino started reviewing films in the early 1990's as a segment of his local television show Focus. He's an award-winning recording artist for Omega Records. Gino is currently working on his 8th album Merchants & Mercenaries. Gino took over Upcomingdiscs Dec 1, 2008. He works out of a home theater he calls The Reel World. Favorite films: The Godfather, The Godfather Part II, The Body Snatcher (Val Lewton film with Karloff and Lugosi, not the pod people film), Unforgiven, Gladiator, The Lion King, Jaws, Son Of Frankenstein, The Good, The Bad And The Ugly, and Monsters, Inc.
The Way, Way Back (Blu-ray) Bounty Killer (Blu-ray)