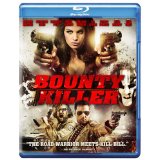 The world of Bounty Killer is a barren wasteland that has been decimated by the unchecked greed of nefarious corporations. In other words, I can’t believe this movie is only set 20 years in the future! I’m not the kind of guy who uses exclamation points very often, so the fact that I threw one at the end of the previous sentence wasn’t an accident. This silly, stylish, thoroughly enjoyable revenge fantasy/satiric action flick is basically one giant exclamation point in movie form.

“The bounty killers compete for body count, fame, and a fat stack of cash.”

In the year 2042, the two greatest bounty hunters killers in the Thrice Burned Lands are the rugged Drifter (Matthew Marsden) and his flashier rival Mary Death (Christian Pitre). Drifter and Mary exchange flirty banter and compete to take out the white collar criminals who previously kick started the devastating Corporate Wars in their quest to destroy one another. Unfortunately, a secret from Drifter’s past makes him and loyal new gun caddy (Barak Hardley) marked men as they evade attacks from yellow-tie-wearing killers, a band of fierce gypsies and even Mary Death.

Your enjoyment of this wacky film — based on a graphic novel published earlier this year — depends on whether you read the previous paragraph and rolled your eyes, or if you became giddy with excitement and wanted to find out more. Well, if you’re still with me, I’m happy to tell you more.

Director/co-writer Henry Saine has created a vivid, gleefully whacked-out vision of the near future. Bounty killers have become the biggest celebrities in the world; they’re a combination of movie stars and famous athletes. While that’s a provocative idea in a vacuum, Saine and co-writers Jason Dodson and Colin Ebeling sprinkle in a plethora of details and quirky touches that bring the concept to life. For example, the idea of a gun caddy — Drifter actually keeps his arsenal in a golf bag — reinforces the bounty-killer-as-sports-star analogy. And in this world, Pabst Blue Ribbon can be more valuable than gold. (Frank Booth is thrilled!) White collar criminals also have their mugs displayed in Western-style wanted posters, so it’s no surprise the standout sequence is a spectacular, Road Warrior-esque stagecoach chase that subs in motorcycles for horses.

Even the fact that some of the visual effects are cartoonishly bad ends up working for the movie, which (despite violence that includes the occasional decapitation) has more in common with a zippy lark like Kung Fu Hustle than the brooding, over-the-top thrills of fellow graphic novel adaptation Sin City. (More than a few shots in Bounty Killer look like they were ripped straight out of a comic book panel.)

Marsden is fine as Drifter, even if he seems a bit too young to be totally convincing as a grizzled badass. Pitre looks like she stepped off the pages of a graphic novel, which initially makes her Mary Death seem like a preening, one-dimensional cosplay enthusiast. But as the story develops — yes, there’s a story here — Pitre has a chance to show some range as we see the origins of her relationship with Drifter. Hardley is the comic relief Bounty Killer doesn’t really need because this is already a pretty goofy movie. Other better-known names (Gary Busey, Beverly D’Angelo, Kristanna Loken, rapper/actress Eve) come out to play for brief stretches of time, but none of them really makes a lasting impression besides Eve. (And also Busey, I suppose, through the sheer force of his Busey-ness.)

It appears the grave and depressing state of our current economic system inspired these filmmakers to make the loosest, most un-serious revenge fantasy they could muster. The “kitchen sink” approach does lead to a few groan-worthy moments. However, Seine and his team seem precisely aware (and proud) of how ridiculous their movie is.

Bounty Killer is presented in an aspect ratio of 2.40:1. The 1080p image is arrived at with an AVC MPEG-4 codec at an average of 24 mbps. This is an extremely strong and versatile HD presentation. The visual look of the film incorporates vibrant animated/motion comic bits, the high-contrast/overexposed world of the Thrice Burned Lands and San Dalloosa, and (briefly) the oppressively dark Badlands. The presentation is so sharp and vivid that it’s almost a detriment to the film because some of the more cheap-o visual effects stick out like a sore thumb. (Let’s just say it’s a good thing the Badlands sequence comes and goes pretty quickly). What puts this Blu-ray over the top is that it goes the extra mile and doesn’t just settle for giving you a clear, pretty picture. The blood is a little redder, and even the animated sequences have a pleasing amount of texture and detail.

The DTS-HD Master Audio 5.1 track is as aggressive as you’d expect from a movie that essentially plays out like a hyperactive videogame. The subs punctuate sound effects and burst to life when Drifter gets his hands on a rocket-propelled grenade (RPG). There’s a generally strong sense of immersion, starting with the opening “rich guy” party that Drifter and Mary Death crash. Not surprisingly, the track is at its best during the frequent gunfights, delivering a dynamic aural experience across all speakers. The music — highlighted by a bunch of ‘70s R&B-style tracks — and the dialogue both come through clearly, even amongst all the chaos, in this well-balanced track.

Curiously, the special features are not advertised on the Blu-ray case. I mean, this isn’t a treasure trove of bonus material, but I’d still expect them to be listed.

Behind the Scenes: (15:12) Director Henry Saine and his cousin/co-writer Jason Dodson discuss the project along with the rest of the cast and crew. Their first pitch meeting with producers occurred right after the market crash of 2008. Before this movie, Saine and Dodson made both an animated and short film version of Bounty Killer. (The latter starred Pitre and Hardley in the roles they reprise here.) As you’d expect, this is a jovial, irreverent watch, and so this featurette — which also includes behind-the-scenes footage — is absolutely worth a look.

Bounty Killer is brisk and light to the point that it’ll probably float away from your memory a few days after you’ve watched it.

Although his visual effects occasionally let him down, director Henry Saine has taken a modest budget and created an impressive spectacle of large-scale action and quippy, balletic gunplay. If you feel like turning your brain off for about 90 minutes — or if you don’t even have the energy to turn it on in the first place — pop this one in and enjoy the show.