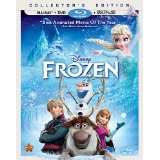 “Beautiful. Powerful. Dangerous. Cold. Ice has a magic that can’t be controlled.”

Like the very best that Disney has offered over the decades, Frozen has its roots in a very old classic fairy tale. Walt himself was interested in doing the Hans Christian Andersen story The Ice Queen immediately following Snow White And The Seven Dwarves. The film was given a production number along with some brief notes. Nothing else remains of the idea, and no one knows exactly what Walt intended or why the story was put on hold. The same thing had happened to another Andersen classic, The Little Mermaid, which took 40 years to finally go from Walt’s original investigations to the Disney classic film it is today.

“Born on cold and winter air and mountain rain combining, this icy force both foul and fair has a Frozen heart worth mining.”

The idea was briefly picked up again in 1977 when Marc Davis, one of the original Nine Old Men, designed concept art for a proposed Disney theme park attraction that was intended to offer a frosty reprieve for heat-exhausted guests. Again, only the artwork remains, and there’s little to tell us what the full intentions were or why the project lingered in limbo for almost 40 years. The concept has finally reached the big screen since its first failed birth over 70 years ago. Was it worth the wait? You need only look at the Oscar for best animated picture, the billion dollars the film did at the box office, or maybe better yet the smile of nostalgia on your own face when you see it. I suspect there might be renewed interest in Marc Davis’s designs for that amusement ride. Frozen will absolutely be an enduring film and almost certainly demand its place among the iconic figures at Disney’s parks.

Elsa (Menzel) is the eldest Princess of Arendelle. She also has a strange power. She has the ability to create and control the forces of ice. Yes, think a young female version of the X-Men’s Iceman. She is close to her younger sister Anna (Bell) and the two use her powers playfully until one day an accident nearly kills Anna. If not for the saving power of a race of trolls, Anna would have died. To protect them both, the trolls remove the memory of Elsa’s ability from Anna’s mind, and Elsa lives in seclusion inside the castle for the years to come. Unfortunately, Anna can’t understand why her close sister is now so distant and…cold.

Their parents are lost on a sea voyage and the Coronation Day comes for Elsa to take her place as Queen of Arendelle. Anna is really the happy one. For the first time in forever, as marked by one of the film’s wonderful songs, the castle gates will be open, there will be people, and she’ll get to be with her beloved sister. But Anna’s suppressed emotions get the best of her and she falls immediately in love with the first man to notice her, Prince Hans (Fontana). They become suddenly engaged, and the resulting shock causes Elsa to reveal her powers to the assembled masses. She flees with shouts of “monster” behind her and leaves the entire area in a permanent frozen ice land.

With the fate of the kingdom on the line, Anna sets out to find her sister and convince her to return summer to the land. Along the way she meets ice salesman Kristoff (Groff) and his faithful reindeer Sven. You can imagine that the ice business isn’t doing so well right now. They also encounter the requisite cute comedy relief character in a snowman the young girls built years ago now brought to life. He’s Olaf (Gad) who dreams of summer, not realizing what frozen things do in summer, the subject of yet another of the film’s fanciful songs. Obviously, the encounter doesn’t go so well, and Anna is left with an icy heart that only an act of true love can cure. And if you think you know where this is going, don’t be so sure.

Frozen walked away with two well-earned Oscars at this past ceremony. The first was for Best Animated Feature, as I’ve already mentioned. The second was for Best Original Song, Let It Go. This was another well-deserved award. One of the best things about these Disney fairy tales has always been the music. From the singable delights of The Sherman Brothers through the Elton John and Tim Rice creations of The Lion King, the songs have often been magical, adding a dynamic to the storytelling that has become completely inseparable over the decades. These songs continue the tradition of the Broadway-show-style numbers that began with Howard Ashman’s touch in Beauty And The Beast. There’s a bit more of a modern arrangement that gives these songs a little more pop and will likely find their place among the many classics that nearly a century of Disney films have provided.

My favorite number isn’t the award-winning Let It Go. I rather liked Anna’s number For The First Time In Forever. Not only do I love the song, but the imagery turns out to be one of the best Disney’s done for these numbers. Anna is celebrating and hopeful, and she finds herself dancing among the castle’s huge paintings creating some very neat poses and interactions with the still-lifes.

After the music, you’ll be blown away by the animation and production design. This is a computer-generated film, but there are some nice images in the hand-drawn style, and they blend seamlessly throughout the film. The icy themes are a veritable treasure trove of opportunities for amazing and engaging images. I never saw the theatrical 3D version, but you can certainly see how this world can be so enveloping. These environments make this a truly unique film. I can’t find a single example to use for comparison. It is perhaps the most engaging environments I’ve ever encountered in any movie I’ve seen before. From Elsa’s “Fortress of Solitude” to the glassy ice staircases and floors, it is easy to be overwhelmed by these images. The film certainly represents yet another milestone in the technology involved, but more importantly, that technology is used with grand artistic flair that looks completely fantastical, yet somehow real enough to want to frolic among the icy creations.

The best thing I can say about the voice cast is that they are almost completely invisible. That’s golden for an animated feature. The less you think about voice acting, the more you’re treating the characters like real people. Kristen Bell is the actress we almost know as a voice herself. For years she provided the narration as the unseen mystery gossiper on Gossip Girl. She brings the same strength here as Anna. Idina Menzel has perhaps the hardest job to pull off. She plays Elsa who is displaying these awesome powers. How do you voice a person who is slinging up ice barricades to protect herself from soldiers’ weapons. She’s also walking a fine line between good and evil character here. In the comics world this would be a terrific origin story for a super-villain, and there are certainly moments in the film where she appears headed precisely that direction. But this is a good character at heart, merely misunderstood, but so was Dr. Frankenstein’s creation. Every aspect of the film including the voice work makes this a rather fine line that doesn’t get played in these films so much, at least not so well.

Finally, I’m more taken with the story than I ever believed I could be. I’m not much of a romantic, and the whole True Love’s Kiss has been played to death, and Disney has been the leader of that pack for decades. Once Upon A Time has played that card so often that the edges are quite bent and frayed. Then something rather remarkable happened. Disney actually found a new slant on a tired story, and suddenly I was on board. Something old is very new again.

Frozen is presented in an unusual aspect ratio of 2.24:1. The 1080p image is arrived at with an AVC MPEG-4 codec at an average 35 mbps. This movie is visually striking, and everything about this high-definition image presentation shouts flawless. The shiny surfaces show off the careful attention to detail with an image so sharp it’s startling at times. The temperatures are cold, so this won’t be the most colorful Disney film you’ve ever seen. Instead of black levels we should be talking about white levels that are more realistic than most live action movie snow I’ve seen over the years. Blues dominate this chilly palette, but they are crystal clear. This is a system show-off film in every respect.

The DTS-HD Master Audio 7.1 is most dominant with the songs and music that wend their way throughout the film. There is also a rather lively, yet subtle use of surrounds that bring the ice alive in ways only those who’ve experienced these conditions could appreciate. The slight cracks and groans that ice can make are perfectly reproduced here. The winds offer up a tasty winter treat. Dialog is clear and well-placed. Of course, there’s the music. Just as with the video, this is a system show-off release.

Get A Horse: (6:00) This new original Mickey Mouse short really brings out the themes of old and new that dominate Frozen. It starts like a classic 1920’s Mickey Mouse cartoon and ends up as an interaction between characters in that film and modern CG versions. They come and go into both worlds. It’s a magical and clever short film that’s worth checking out.

Making Of Frozen: (3:18) OK, this one is misleading. It’s not a behind-the-scenes feature but rather a musical number.

D’Frosted – Disney’s Journey From Hans Christian Andersen To Frozen: (7:27) This is the behind-the-scenes feature. It’s mostly used to explore some of that Marc Davis art I was talking about as the two directors look over the pieces with his widow. They remark on how much they have in common. It’s a really nice piece, but there’s not any real in-depth making-of material here, or anywhere else on the disc for that matter. I suspect it’s all being held back for the eventual release of the 3D disc.

Deleted Scenes: (6:51) This stuff has a play-all with introductions from the directors. Of course, they are animated stotyboards. No finished animation, as usual. One shows how there was once a more deliberate idea to make Elsa more of a villain.

Music Videos: You get several language versions of Let It Go.

I have only one issue with what is otherwise a near perfect release. Disney has held back the 3D version from sale at this point. Yes, you’ve been through the whole opening the vaults cash grab before with The Mouse House. It’s a film worth having and seeing now and I just don’t know how long it’ll be before we get the next release. The movie itself is an absolutely must have. It’s Disney’s best since The Lion King. One thing is for certain: “There is great beauty in it.”

Gino Sassani is a member of the Southeastern Film Critic's Association (SEFCA). He is a film and television critic based in Tampa, Florida. He's also the Senior Editor here at Upcomingdiscs. Gino started reviewing films in the early 1990's as a segment of his local television show Focus. He's an award-winning recording artist for Omega Records. Gino is currently working on his 8th album Merchants & Mercenaries. Gino took over Upcomingdiscs Dec 1, 2008. He works out of a home theater he calls The Reel World. Favorite films: The Godfather, The Godfather Part II, The Body Snatcher (Val Lewton film with Karloff and Lugosi, not the pod people film), Unforgiven, Gladiator, The Lion King, Jaws, Son Of Frankenstein, The Good, The Bad And The Ugly, and Monsters, Inc.
Tom Holland’s Twisted Tales Here Comes the Devil (Blu-ray)