Posted in: Disc Reviews by Gino Sassani on July 6th, 2016 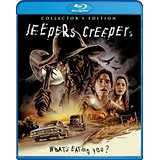 “I don’t know if it’s a demon or a devil, or just some hungry thing from some dark place in time. I just know it’s not going to stop coming after you or anyone else it wants to. ‘Cos once it has the scent of something it likes, it can’t be stopped.”

Just days before the tragic events of 9/11 brought so much real-life horror into our lives, Victor Salva attempted to resurrect some old-school monster movie magic on the movie-going public. The low-budget thriller hit the box office with a bang. Its $13 million opening weekend was a record for Labor Day and is partly responsible for studios taking a closer look at the traditionally slow release weekend. It was the #1 film, beating out sequels to both Rush Hour and American Pie. Unfortunately for all of us, 9/11 fell upon us, and box office numbers tanked. We had other things on our minds. The last thing the American public wanted suddenly was to be scared… we already were. Still, that strong opening weekend was a signal that monster movies might be back, and Jeepers Creepers might be the film to lead the genre into the 21st century.

“You know the part in horror movies when somebody does something really stupid, and everybody hates him for it? This is it.”

Jeepers Creepers has plenty of these moments. It relishes them and plays them for scares just the same. I have to admit I wasn’t a fan the first time I saw the movie. I was somewhat uneasy about how little was ever really explained about The Creeper. Later I discovered there are actually two films here. The second half is little more than the same jump scares and tricks we’ve seen a thousand times before. While The Creeper’s look is actually quite exceptional, we get too many lingering looks at him in the second half of the film. If we’re going to spend so much time on him, we should know more about him, because frankly, you’ve given up the right to be mysterious when the creature comes out so often in the light.

But the first half of this movie is a different being altogether. It’s a masterful and scary 45 minutes. Here we have just the two leads played by relative newcomers to the industry. Gina Philips is Trish, and Justin Long is Dary. They are brother and sister who are on their way home from school for break. Along the way they encounter one of the coolest and most evil trucks you’ll ever see. This thing has a ton of character, and we play a game very much like Steven Spielberg’s first film Duel. Once they escape the crazy road rage, they see the truck parked by an old abandoned truck and a figure who appears to be dumping bodies down a drainage pipe. After another road encounter with the truck, they decide to go back and investigate. Here’s where we get a lot of those horror movie stupid things. Dary climbs down the pipe where he discovers a wonderfully atmospheric cavern with literally hundreds of preserved bodies sewn together and mounted upon the walls and ceiling. This is a movie very much worth watching. Here writer/director Victor Salva shows a love and influence of the classic monsters who were built up far more by their atmospheric set pieces and shadows on the wall. The Ocala, Florida locations are eerie and quite effective for almost no extra budget money. Justin Long also shows the first gleams of talent that has led to a pretty successful acting career. There’s a scene where he’s returned from the cavern and stares mute through the car window. It’s a brilliant and quite silent performance, and it’s the golden moment of the film.

Then they go get the cops. From there the film turns into a frenzy of odd characters and the more mundane high body count. The film was so much scarier when we never saw one person get killed. The final 45 minutes is mayhem. The monster is no longer scary and the rest of the characters not worth caring about. The little exposition we do get comes from Patricia Belcher eating up scenery as a psychic who has seen the siblings and knows how it’s going to end. That’s where we learn that he’s an immortal creature that sleeps for 23 years then eats (people) for 23 days before going back to sleep to begin the cycle again. To justify the name, perhaps we hear various versions of the Johnny Mercer song Jeepers Creepers, which is never as effective as Salvo appears to think it was. It ties into a rather poor ending that wastes a perfect 45 minute film opening. I think even Salvo got the message, because the song, so important in this film, doesn’t reappear at all in Jeepers Creepers II.

Shout Factory has brought this film to Blu-ray, and I’m rather glad that they did. Somehow I never appreciated just how good the first half of this film really was. This revisit turned into a nice chance to experience that part of the film. It’s worth picking up for that. Just strap in for the ride when the second half kicks in.

Jeepers Creepers is presented in its original aspect ratio of 1.85:1. The 1080p image is arrived at with an AVC MPEG-4 codec at very constant 37 mbps. The most important aspect of this high-definition image presentation is that it wasn’t scrubbed of its grain and film-like appearance. Yes, it made for somewhat weak black levels that didn’t provide quite the shadow definition you might have liked. But this is almost a last of its kind with a willingness to let the organic nature of the film enhance the atmosphere. There are moments a film like this does not benefit from this expanded sharpness and detail. At 1:08:49 The Creeper is bending over a body in a jail cell. The zipper is as clear as I’ve ever seen it, and I’ve watched a ton of Godzilla movies. It actually brought a bit of a smile for me. By this time the film stopped being scary anyway.

The DTS-HD Master Audio 5.1 is actually a bit of a pleasant surprise. The surrounds are used a bit more than I would have expected, but to good effect. Dialog cuts through quite nicely, while the score layers in there just like it should to build on the atmosphere. The surrounds give some breath to The Creeper and give us a wonderful sense of confinement in the cavern but spot-on echo in the drain pipe. The film also knows when to go silent. It’s a discipline many of the greats haven’t yet learned.

All of the DVD extras are ported over while Shout added some new material shot just for this release. That material follows:

Jeepers Creepers – Now And Then: (36:35) This is really a collection of interviews with the crew most notably Victor Salvo. They talk about their experiences, and while they do not always perfectly jive, you get the feeling there’s a defensive pride going on here. There is the unnecessary interruption of clips.

From Critters To Creepers: (19:38) This is really a continuation of the interviews. One of them admits to passing on Nightmare On Elm Street. Yeah, that’ll never work.

One of the best parts of this job is the chance to go back and revisit films I had seen many years before and find out if I still have the same feelings now as I did then. This time I discovered I did, but for only half the movie. For years I was dismissive when I would be asked about this one. When I’m asked now, I’ll say…”I just saw it again…”

Gino Sassani is a member of the Southeastern Film Critic's Association (SEFCA). He is a film and television critic based in Tampa, Florida. He's also the Senior Editor here at Upcomingdiscs. Gino started reviewing films in the early 1990's as a segment of his local television show Focus. He's an award-winning recording artist for Omega Records. Gino is currently working on his 8th album Merchants & Mercenaries. Gino took over Upcomingdiscs Dec 1, 2008. He works out of a home theater he calls The Reel World. Favorite films: The Godfather, The Godfather Part II, The Body Snatcher (Val Lewton film with Karloff and Lugosi, not the pod people film), Unforgiven, Gladiator, The Lion King, Jaws, Son Of Frankenstein, The Good, The Bad And The Ugly, and Monsters, Inc.
Swiss Army Man Independence Day (UHD Blu-ray) (4K)