Posted in: Disc Reviews by Gino Sassani on February 15th, 2017 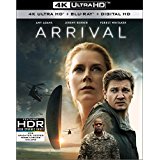 The problem is that this starts out with the kind of story we’ve seen a thousand times before. The alien invasion theme is nothing new. H.G. Wells was describing it back in the 19th Century with War of the Worlds. Unrelated Orson Welles scared the crap out of a depression-era radio audience with the same story. Independence Day gave us a brilliantly visual story that also begins the same way: alien ships begin to take strategic positions around the world. Here we go again, right? Wrong. We should have guessed from the beginning that when director Denis Villeneuve tackles a genre, he’s going to turn it on his head. We’d seen him do it before. Last year’s Sicario gave us a “war on drugs” film that wasn’t like anything that came before it. Prisoners could have looked like a Taken sequel. I mean, how many ways can a tough guy deal with a kidnapped daughter? Of course, Villeneuve showed us there was at least one more way. He does it again with an alien first-contact film that is a blend of The Day The Earth Stood Still, 2001 A Space Odyssey, and maybe a little bit of the Twilight Zone classic To Serve Man, without the special sauce recipe. But mostly it’s a cerebral journey that mines much of the same ground that Christopher Nolan did with Interstellar. Except that Villeneuve did a better job. Oh, and he spent $120 million less to do it. You still might be scratching your head when you leave, but you will also have some wonderful themes to ponder on the drive home. Arrival might well be one of the best films I’ll see in 2016.

Arrival is presented in its original aspect ratio of 2.35:1. The Ultra-high-definition  image is arrived at by an HEVC codec with an average bitrate of 75mbps. This isn’t one of those 4K releases that will jump out at you. The atmosphere of the film is deliberately dreary. The director likens it to an eternal overcast day, and that’s exactly what you experience here. Colors are very desaturated and won’t provide many moments of pop. The closest you get are the red hazmat suits that add about the only real color in the film. Everything from the alien ship to the creature designs appear to be bathed in light-sucking blackness. Even black levels will suffer a bit from the hazy style. What you do get is plenty of detail that is more texture than any razor sharpness you might expect from a modern science fiction film. It’s all intended to create a mood, and it’s terribly effective if you can get beyond the style. But if you’re distracted by this, you most likely can’t deal with 1940’s black & white film noir. Give it a chance, and this image will transport you to another way of thinking…literally.

The DTS-HD MA 7.1 track is another unique experience completely. The sound design here is just as unusual and can also put some viewers off. The subs are as vital here as they are on any film I’ve ever watched. It’s an audio presentation that you almost have to feel to experience properly. It’s almost impossible to put the audio into words. It’s a combination of sounds that together with a very unconventional score create emotional reactions more than traditional specific sounds that we can easily categorize or access specifically. Everything from the alien whale-like vocalizations to even common sounds which feel a little “off” are brought together to put you at just a little unease. Dialog is usually soft, but audible. The surrounds certainly immerse you within this alien environment and I think do a marvelous job of putting you in the shoes of the two leads who are being exposed to these stimuli throughout the film.

Xenolinguistics – Understanding Arrival: (30:02) This is the behind-the-scenes feature which covers a lot of ground in just a half hour. The author of the original short story, The Story of Your Life, gives us some insight into the philosophical side of things. The cast and crew cover topics like casting, sound design, conceptual art, lighting and cinematography. Yeah, there’s a lot of love-fest stuff here.

Acoustic Signatures – The Sound Design: (13:59) The cast and crew talk about some of the odd decisions that went into the unique sound design.

Eternal Recurrence – The Score: (11:24) Johann Johannsson talks about scoring his first science fiction film. He demonstrates some of the techniques he experimented with to get at some of what we hear on the film.

Nonlinear Thinking – The Editing Process: (11:19) A film can be completely rewritten in the editing room. Joe Walker takes us inside the process for the film.

Principles Of Time, Memory & Language: (15:24) Here we get some of the science behind these concepts from something called the Variational Principle Equation to how we process cause and effect.

Gino Sassani is a member of the Southeastern Film Critic's Association (SEFCA). He is a film and television critic based in Tampa, Florida. He's also the Senior Editor here at Upcomingdiscs. Gino started reviewing films in the early 1990's as a segment of his local television show Focus. He's an award-winning recording artist for Omega Records. Gino is currently working on his 8th album Merchants & Mercenaries. Gino took over Upcomingdiscs Dec 1, 2008. He works out of a home theater he calls The Reel World. Favorite films: The Godfather, The Godfather Part II, The Body Snatcher (Val Lewton film with Karloff and Lugosi, not the pod people film), Unforgiven, Gladiator, The Lion King, Jaws, Son Of Frankenstein, The Good, The Bad And The Ugly, and Monsters, Inc.
Star Trek: Deep Space Nine: The Complete Series American Pastoral (Blu-ray)