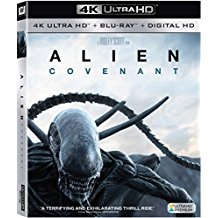 Fifteen years after the events of Prometheus, a colony ship named Covenant is bound for a remote planet with thousands of colonists and embryos when they are struck by a neutrino burst (think of it as a power space storm) which damages the ship and results in the death of several colonists as well as members of the crew, including the ship’s captain (James Franco). Thrust into the leadership role, Christopher Oram (Billy Crudup) finds himself overwhelmed by his new position and dissent among the crew.

Aside from that, Alien Covenant was a thrill ride, especially when the action kicked off and the colonists found themselves doing battle with a genetically-engineered superior being, as stated by the only familiar face in the film. Alien fans may experience a throwback to the original films with Sigourney Weaver when they watch Katherine Waterston in action. As the primary character we get to experience this new world through her eyes, and she without question experiences the biggest arc: going from sort of a mousy character in the beginning to the badass in a very quick and organic span. The only other notable character would be Danny McBride’s Tennessee; he doesn’t’ really have the same journey as Waterston, but he grows through some things as well. McBride gives an above-average performance and is one of the most human characters of the film.

Alien: Covenant is presented in its original aspect ratio of 2.40:1. The ultra-high-definition 2160p  image is arrived at by an HEVC codec with an average bitrate of 65 mbps. In keeping with the traditional franchise atmosphere, this film is washed of most of its colors. Notable exceptions come in the form of bright blue monitor displays that create a nice reflective effect on character faces. Everything else is quite dark and nearly colorless. There’s a white version of the creature that comes out more as a light gray. Whites do not play out well in this ultra-high-definition image presentation. There is a nice element of sharpness and detail. Again this is most notable in the display screens where you can make out details that are merely blurs on the Blu-ray. Black levels are fair and at times really show up. There are others where too much of the shadow definition is lost. There’s nice contrast. The white ship against the blackness of space stands out rather nicely and is the best white presentation in the image.

The Dolby Atmos presentation defaults to a 7.1 track. You can expect surrounds to become aggressive when there is a creature about. Those subtle ticks and shrieks are all intended to leave you feeling hopelessly surrounded by the creatures. Subs kick in nicely, particularly as the ships are crashing through the atmosphere. The score blends flawlessly, becoming almost invisible. That’s actually the mark of a truly superior score. Dialog comes through most of the time. Yes, there are moments of extreme mayhem that leave you struggling for a word or two.

USCSS Covenant: Here you’ll find a series of three “lost footage” pieces from the events of the film. One includes the selection trials the crew are submitted to hooked up to a computer system. One is a music video.

Sector 87 – Planet 4: These short features act as a bridge from the film Prometheus. The David character narrates the three segments.

Master Class – Ridley Scott: (55:20) This is the making-of feature that is obviously focused on Director Ridley Scott and his thoughts/plans for the franchise. There’s plenty of behind-the-scenes footage and lots of storyboards drawn by Scott. The feature is split into four parts covering story, characters, setting, and creatures. You can use the play-all option to watch it as a single piece.

Gallery and Trailers round out the extras.

Alien Covenant bridges the gap between the original films and reboot quite well as well as leaves us dying to know what comes next. Though predictable in certain areas, the action sequences will keep you on the edge of your seat. I already have plans to see it again, which should tell you that it is worth seeing.

Jeremy Butler is a film school graduate of the International Academy of Design and Technology. He is been writing for Upcomingdiscs since 2012; however, movies have played a big part of his life for much longer. Favorite genres include horror, science fiction/fantasy, and comedy. Favorite movies are V for Vendetta, Boondocks Saints, Kiss Kiss Bang Bang, and The Godfather.
Batman and Harley Quinn: Limited-Edition Gift Set (Blu-ray) Baywatch (UHD Blu-ray) (4K)