Posted in: Disc Reviews by Archive Authors on June 23rd, 2003

In 1939 Warsaw is invaded by Nazi Germany, Wladyslaw Szpilman is performing live on a radio station as it is dive bombed by the Luftwaffe. He continues to play until he is almost killed. This opening scene sets the tone for the story of a man so driven by his passion for music even in the face of adversary. As the film continues we watch the establishment of the Warsaw ghetto and the beginning of the reign of hate towards the Jews by Nazi Germany.

The Warsaw ghetto is full of stark contrasts we watch as people die in the streets from hunger and others prosper by bribing guards and importing goods, we see Germans helping Jews escape from the ghetto and Jews who join the ghetto police in an attempt to save themselves. At one point in time the ghetto contained over 500,000 people, as the war continues Wladyslaws family and most of the residents of the ghetto are loaded onto trains and shipped off to concentration camps never to be seen again. Those who are left over are formed into work camps by the Germans and start an uprising. Threw all this Wladyslaw survives even when he comes face to face with a Nazi officer who finds him hiding in their headquarters. The officer knows that the war is almost over as the Russian army is fast approaching and brings him food in exchange for listening to him play.

In the end less then 60 people survived the ghetto and Szpilman was one of the survivors. Fueled by his passion for music and a need to live this is a deeply moving and personal story.

The film is at times stark and bleak like the story and at others it is warm and hopeful, it really helps to convey the emotional context of the story. The image is a 1.85:1 anamorphic widescreen transfer and it is absolutely flawless and of reference quality. The transfer is first rate with no film grit, debris or conversion artifacts to be seen. In low light situation the shadow levels are perfect and never overly dark with very good delineation. The look and feel of the era is captured perfectly from the warm opening confines of the family apartment to the bleak war torn landscape it is all there sharp, crisp and riveting. The menus are animated, scored with Szpilman’s haunting melodies and easy to navigate

The audio is presented in both a Dolby Digital and DTS 5.1 soundtrack, I did notice that the DTS track sounded much more open and dynamic. Like the video in this film we have an audio track of stark contrasts. At times we are surrounded by immersive crown sounds and at others we find ourselves standing in an open square as the wind howls around us with a haunting score playing softly in the background. The audio makes very good use of the directional cues available with digital surround; there is a scene on a roof involving a sniper that sounds very convincing. Dialogue is also intelligible and very easy to understand, the score also comes through with perfect timbale accuracy. The audio like the video is of reference quality it is more subtle and less bombastic then some but flawlessly designed. Also included are a French 5.1 audio track and subtitles.

When a movie wins 3 Academy Awards and comes in a three-disc set (disc three contains the films CD soundtrack), you expect a lot the special features. This disc does not deliver fully on this front unfortunately.

We have a making of documentary that has a good interview with Roman Polanksi about his own experiences surviving the Warsaw and Cracow ghettos; this is much better then your average making of featurette and really helps to show how personal this film is. Then we have five text featurettes, these are director’s notes and a Q&A session with Roman Polanski, The Warsaw Ghetto: Historical Background, Wladyslaw Szpilman’s Biography and production notes.

While all five of these contain interesting information and are worth reading through there is also no reason why these are not documentaries and this is a disappointment for a film of this character. We also have numerous TV spots and trailers for the film and the soundtrack as well as a gallery of posters and photos.

Lastly we have filmographies for the major players in the film and two sample tracks from the soundtrack. The sample tracks are of very good sound quality featuring two of the most haunting melodies from the film. If instead of five text featurettes we would have been presented with five documentaries then this would have been and outstanding accompaniment to the film, as they are not it ends up feeling somewhat hollow and weak.

This film is a deeply personal story for Roman Polanski and everyone in the film recognizes this and turn in their best performances. Adrien Brody is riveting, he perfectly conveys the emotional struggle of a man trying to survive under very difficult circumstances; too watch him wither away almost to nothing in front of your eyes is very powerful and there is not doubt that deserved the best actor award at the Oscars this year.

This film conveys the worst and best of people and the power of the human spirit and is a sobering reminder just how grateful we should be for our lives. A word of warning though the film does not gloss anything over and some of the events are very disturbing, watching a family being dragged out into the street and slaughtered seemingly for sport is not for the faint of heart or for kids so be warned.

The video and audio like the story and performances are of the highest quality and even without the special features this film is easily worth adding to your collection, I just wish they had done a better job with the extra footage as it would have made this DVD a flawless package. 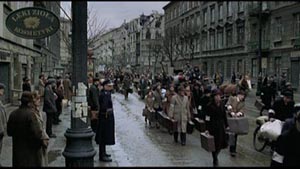 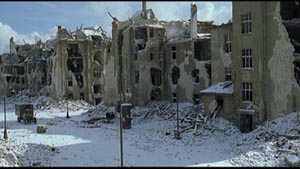 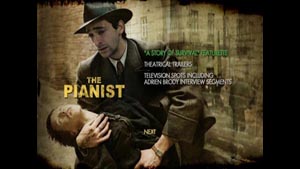 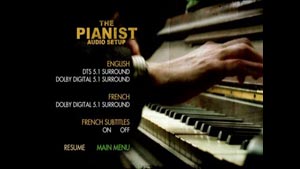