Posted in: Disc Reviews by Archive Authors on July 29th, 2003

Documentary filmmaker Michael Moore’s film Bowling for Columbine has done more then just win the Academy Award for best documentary film, it has also ruffled a lot of feathers. Moore’s extreme views, which are embraced by many, also seem to piss off a lot of people.

Moore’s extreme bias on the topic of gun control and U.S. war mongering has lead many to believe that Bowling for Columbine is more of a 2-hour speech then an award winning documentary. You may not like what he has to say, but y…u must give Moore credit for his dedication to his beliefs.

Bowling for Columbine raising the issue of gun control in the United States. Instigated by the shootings in Columbine, this film walk you through the history of violence in the United States, and tries to bring light to the question of why there are so many gun related deaths in the U.S… more then any other civilized country in the world.

If you agree with Moore’s views or not, this film does raise some interesting questions about society and violence as a whole… often in a very satirical yet graphic manner. By taking this film for what it was, and questioning the points that were made, I found myself really enjoying this film.

The video on this disc, as can be expected from a documentary style film, was a mixed bag. The 1.85:1 anamorphic widescreen transfer looks natural in regards to color and intended tone, but the transfer is filled with dust, debris, and minor scratches. Due to the nature of this film, these flaws are not at all distracting, and do not hinder the effectiveness of the discs presentation.

In terms of documentaries, this disc sounds very good. The dialog driven soundtrack is clear and effective. The score fills the front channels nicely, and the surrounds, as can be expected, are ignored almost entirely. No one should expect much in terms of audio from a documentary style film, and this disc still delivers.

The audio commentary that is included on this discs in very unconventional, and very useless. Rather then having Michael Moore talk more about his film, this track includes a collection of interns that worked on the film. Interns you ask? Yes… Moore in all of his unconventional wisdom, has asked who he refers to as “the lowest rung in the production of the film” to run this commentary. As you can expect, this track is unpolished, and overly busy. The comments are very random, and do not carry much weight. On a side note, the audio introduction by Moore states that he decided not to conduct the commentary because he felt he got his message across fully in the film.

If you are familiar with Michael Moore, you should know he really likes to speak his mind; in regards to the special features on this disc, he does exactly that… he speaks his mind over and over again.

”Return to Denver/Littleton” is a 25 minute featurette that shows a lecture that Moore gave at the University of Denver Six months after Bowling for Columbine was released. Moore takes the pulpit and predictably continues to push his ideas on everyone I the audience… much to their delight. Also included in a brief Q&A with Moore where he has the chance to interact with some of the audience members.

This DVD release gave Moore a stage to explain and defend his acceptance speech at the Academy Awards (live from his backyard). This 20 minute speech walks you through the events that lead up to the event, the actual speech, and the aftermath. The Academy refused Moore’s request to show the actual speech, so he just re-states what he said.

Moore once again pushes his beliefs even further on “The Charlie Rose Show” featurette and the Interview with former Clinton Press Secretary Joe Lockhart. Lastly, this disc contains a Marilyn Manson music video, the theatrical trailer, a photo gallery, a film festival scrapbook, and a few minimal ROM features.

Love him or hate him, accept his thoughts or dismiss them, you really should give this DVD a spin. Moore raises some very interesting questions about guns and society, and even if you think he is full of crap, his ideas are worth examining further. Is this film a traditional documentary? Not really. Bowling for Columbine is far to biased to be looked at as objective, but this does not take away from the entertainment value that this film offers. 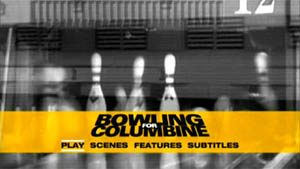 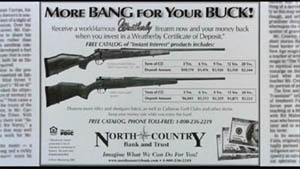 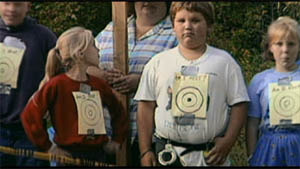 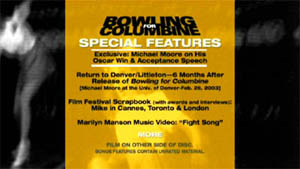 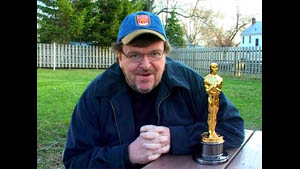