Terminator 3 – Rise of the Machines

Posted in: Disc Reviews by Archive Authors on October 21st, 2003

Many people would argue that T3: Rise of the Machines should never have been made; a new director, an unknown storyline, and a new actor playing John Connor. Others could not wait to see Arnie suit up as the Terminator one last time. Sure, the Rise of the Machines plot is somewhat questionable, but you sure do get a bunch of action packed into this film.

Arnold Schwarzenegger reprises his role of the big, bad, funny (yet not knowingly) terminator… but this time he is in for his biggest challenge yet, fa…ing off against a female terminator. Kristanna Loken does a good job as the newest Terminator, and the rest of the cast do an adequate job as well. This film may not hold a candle to the first two films in this series, it is still extremely entertaining to watch.

”A decade has passed since John Connor (NICK STAHL) helped prevent Judgment Day and save mankind from mass destruction. Now 25, Connor lives “off the grid” – no home, no credit cards, no cell phone and no job. No record of his existence. No way he can be traced by Skynet – the highly developed network of machines that once tried to kill him and wage war on humanity. Until, out of the shadows of the future steps the T-X (KRISTANNA LOKEN), Skynet’s most sophisticated cyborg killing machine yet. Sent back through time to complete the job left unfinished by her predecessor, the T-1000, this machine is as relentless as her human guise is beautiful. Now Connor’s only hope for survival is the Terminator (ARNOLD SCHWARZENEGGER), his mysterious former assassin. Together, they must triumph over the technologically superior T-X and forestall the looming threat of Judgment Day, or face the apocalypse and the fall of civilization as we know it.” – Warner Bros.

Let me spell this out for you… R-E-F-E-R-E-N-C-E. This DVD looks fabulous. The 2.40:1 anamorphic widescreen transfer is absolutely flawless. The print is free from all defects, the colors are sharp yet natural, and the darks are deep. If you are looking for a disc to showcase your Home Theater, you may have met your match.

It is possible for the audio to be as great as the video on this disc? The answer is an emphatic YES! The sound separation on this Dolby Digital 5.1 track is wonderful. The soundstage is full of life, with perfect sound movement through all channels. The score and dialog are both effective, and the base is deep and powerful. You will really enjoy listening to this film on DVD.

As could be expected, this set is jam-packed with extras. Disc one contains two audio commentaries. The first, conducted by the cast of T3, is very good. Each participant had their segments recorded separate and then mixed together to create one track. This mixing creates a very organized and succinct commentary, which is a nice change from most multi-participant tracks. Each cast member adds good insight into their thoughts and experiences with the film. This is one of the better tracks I have heard as of late. The second commentary features director Jonathan Mastow. As is the case as the first track, this commentary is very good… featuring a more detailed yet less entertaining track.

This may not be the best film, but this sure is one excellent DVD. The audio, video, and extras are all top-notch. You should really check this disc out. 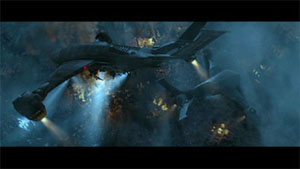 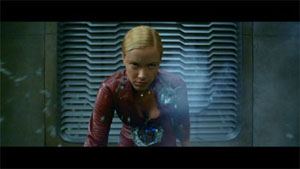 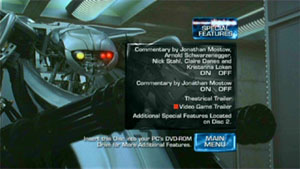 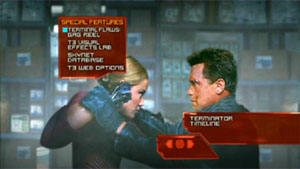