Posted in: Disc Reviews by Archive Authors on March 6th, 2006

When news first arrived of this remake, many fans, including myself, were very excited to see what Jackson could come up with. However, I don’t need to spell out how many remakes, including the recent Pink Panther, are extremely horrid. With the news coming out that Universal wanted Jackson to trim the film down (from the final run time of 182 minutes to 140 for a quicker turn around audience) and that the film’s budget had sky-rocketed forcing Jackson and his partner Fran Walsh to fork over their money, a lot of fans started to worry if Peter Jackson’s King Kong was going to go down in history as simply another poorly made remake. Can a one-time nobody director, now an extremely famous director turn a black and white classic into a modern age epic? Read on to find out.

Naomi Watts (21 Grams) plays Ann Darrow, an actress from the world of burlesque type entertainment. She finds herself out of a job in the Depression-era New York City. Enter Carl Denham, portrayed by Jack Black (School of Rock), who is an entrepreneur, adventurer, and a filmmaker who is struggling to make a name for himself in the entertainment world. Denham finds out about an island simply dubbed Skull Island that no one has ever found or, more importantly, lived to tell that they have found it. Denham convinces both Darrow and a man named Jack Driscoll, played by Adrian Brody (The Pianist), a New York playwright, to come along for the ride of a lifetime and a chance to be a part of cinematic history. What they find upon arriving on Skull Island is a lot of grossly, huge insects and animals. But what they also find is, well, Kong himself.

King Kong, shortly put, is magnificent entertainment that is such a fabulous film. There is a scene in the film where Kong grabs Ann and brings her up to his lair, simply putting her down with no force whatsoever. Kong then roars and pounds his chest declaring himself the King of the Jungle. Ann, somehow knowing what to do, starts to juggle, backflip and basically do her New York stage routine for Kong. Kong proceeds to look on in pure curiosity, wonder and finally seems to laugh when he pushes her over. To Kong, Ann is a tiny little toy that has been given to him. He treats this toy with the utmost respect and soon Ann and King are watching the sun set together accompanied by a majestic, gorgeous background.

Computers created a majority of the scenery are eyes are able to feast on, including the mighty ape himself (Andy Serkis provided the motions for him via a green-screen suit). But the Computers don’t only create the special effects we see, they also help to create and add the style we view. They don’t just give us bland backgrounds for the sake of adding something in, but they more create backgrounds that seem to fit the story being presented. We are treated to overgrown prehistoric creatures, amazing fortresses, and incredibly vile insects.

Peter Jackson, just coming off his directorial masterpieces in the Lord of the Rings Trilogy decided to pull a Steven Spielberg Jaws move by not showing us the big gorilla until exactly 1 hour and 10 minutes in. This creates, just like in the film Jaws, a sense of anticipation, of incredibly silent tones, little rumblings, and a lot of blabbing from the crew on the ship all until the ship literally arrives on Skull Island by crash landing, which is one of the first of many scary scenes we are given.

The end result is a film that should, if it is not already, be labeled a masterpiece. The film is surprisingly involving, and has enough to bring audiences in that would never think of ever seeing the film. The film had heart, comedy, suspense, action, an amazing score, good acting, and phenomenal directing. Upon seeing the very first teaser trailer for Peter Jackson’s remake of the 1933 classic King Kong, I knew I was in for an immediate treat come release time. Mr. Jackson didn’t let me down one bit as, even though it didn’t receive a Best Picture Oscar nomination (which in comparison to those nominated it didn’t deserve it), King Kong is still one of the best film’s of 2005.

King Kong is presented in a 2:35:1 Widescreen Aspect Ratio. The film, like most big budget films, looks pretty good. Colors are bright and vibrant while the color palette shows exemplary brights and morbid darks that all seem to converge with the theme when necessary. Skull Island, an island of huge and vile creatures, comes alive through grays and dark tones that help showcase it as an island of horror. 1930’s New York City is brought to us with lovely, bright colors (more the return to the city than the beginning), while Kong himself is rather dark and shows his age through gray hairs and torn skin. A fine presentation.

We are given a 5.1 Dolby Digital Surround Sound Audio Track that more than does its’ job. Thanks in part to an energetic score by James Newton Howard, the themes of the 1930’s are brought alive in fabulous form. We are given silent scenes like the breathtakingly beautiful Central Park scene to the final Empire State Building scenes that are a true auditory pleasure. Dialogue is very clear from the center channels while the sub seems to bounce in a lovely rhythm thanks to Kong’s loud screams. From the silent, subdued waves, to the loud booming roars of Kong that zoom and echo past us, the audio is excellent.

We get 2 basic featurettes here on the single disc edition. For a lot more goodies, focus on the two disc edition.

King Kong is not just a good film for it’s effects, it is a good film for the story it presents all while packing in the necessary ingredients of an amazing time at the theater. While the DVD doesn’t really come packed with amazing features (check out the 2-Disc Edition to fill that part), the DVD boasts very nice picture and equally good audio. If you are a fan of the film, or haven’t seen the film, trust me in this when I say please do yourself the favor of at least renting this visual and cinematic masterpiece. The day’s of a heart-warming, moving, beautiful film are back. 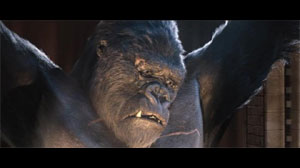 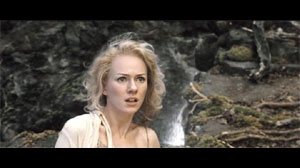 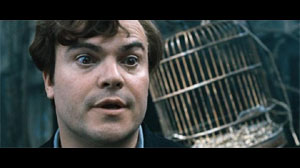