Posted in: Disc Reviews by Archive Authors on July 29th, 2006 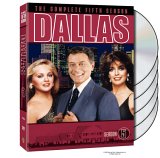 Before there was Desperate Housewives, there was Dallas. Back stabbing, cheating, lying, romantic jerks with a ton of money. This show is what happens when a Soap Opera is taken seriously. Instead of cheesy organ music and dramatic zooms, this is a true hour-long evening drama. It is also one of the most famous shows of all time.

Season five opens with a dramatic kick off; the conclusion of Season Four’s finale that features a murder at the Southfork Ranch! Shock gives way to mystery as the investigation unfolds, and even the Sheriff’s department get caught in the middle of the family’s squabbles. From here, the drama continues, as J.R.’s marriage falters and a tragedy befalls the head of the Ewing family. For those of you that have not seen these episodes, I may have said to much already. I will just say that if you are a fan of this show, the twists and turns in Season Five certainly do not disappoint.

The show may be entertaining, but the audio sure is rotten. Viewers just have one option for audio, in the form of Dolby Mono. The track is flat and wholly one-dimensional. There are no bass tones whatsoever, and the highs aren’t much to speak of, either. Dialog is flat, and the score is worse. What’s more, since this is a mono track, there is no movement in the audio; everything comes directly from the center channel. I understand that this is exactly the way the show sounded when people tuned in to CBS every Friday night, but this track is a real bore.

The video quality is much better than that of the audio, but that is still not to say that it is anything truly spectacular. Don’t let the horrible opening credits sequence discourage you, the picture cleans up dramatically once the episodes begin. The color is a bit washed-out and there’s not a lot of depth, but the picture is actually cleaner than I expected it to be overall. Grain is virtually non-existent, and blemishes are kept to a minimum. In fact, the occasional scratch or flash on the negative actually carries with it a certain nostalgic charm for those of us that grew up watching this show.

Television DVDs are notorious for being light on the extras. This one is actually a bit deceiving. There is just one extra here, a featurette called “A Living Landmark: A Tour of the Real Southfork Ranch”. While this sounds like a throw-away extra, it is actually a pretty interesting look at not only the house itself, but especially at how and where much of the show was filmed. The piece only runs about ten minutes in length, so there’s not exactly an overwhelming amount f information here, but it is a nice little extra. I am sorry to say, however, that that is the end of the added content. Not so much as a commentary or a commercial is here, besides this one brief featurette.

This show can hardly be considered to be the highest of quality, but it is just plain fun to watch. Fun in the way that The Insider, People magazine and the aforementioned Housewives program is fun. It’s trashy, it’s nasty, and it’s the ultimate guilty pleasure. As always, if you are new to this series, you owe it to yourself to start with Season One and work your way up. If you are a long time fan, let me take this opportunity to remind you that Season Five is as good as any season in the series. There are tons of twists and turns, and the back-stabbing drama is deliciously evil.