Posted in: Disc Reviews by Archive Authors on August 12th, 2006 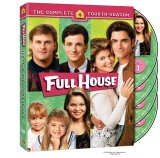 You would have to either be from another planet, been raised by wolves or be under the age of 15 to not have some sort of a personal history with Full House. The show was a staple of Friday night television for eight seasons, defying all logic and proving that the general public doesn’t always know quality when they see it. The story about a non-traditional household was inexplicably popular, despite the fact that it got consistently poor reviews year after year. Even more surprising was how many careers came out of the show. Of course, Bob Saget went on to play a similar role as the host of America’s Funniest Home Videos, but John Stamos went on to marry Rebecca Romijn… a match that nobody saw coming or truly understood. And then, of course, there is the multi-million dollar phenomenon that is the Olsen twins.

This particular season falls fight in the middle of the show’s run. The big storyline here is the marriage of Uncle Joey and Becky, a plot line that runs from the proposal to the wedding and beyond. Other storylines include Stephanie getting glasses (apparently a major trauma) and one major character getting pregnant. I respect the fact that the show is trying to evolve, but in the end, this is just the same old soft crap that we have already seen for three previous seasons.

The audio here is extremely bass heavy, and I don’t mean that as a compliment. This is the kind of bass heavy that one might find when playing a recorded cassette tape through a modern home theater system. The track is distorted and muddy, with no clarity whatsoever. The dialog can certainly be understood, but this is not a release that was meant to be watched on a 5.1 setup. In fact, if you insist on watching this release, I would suggest that you watch it through your television’s standard speakers, as they will be able to handle this week track much better than the clarity that a full home theater setup will provide.

When this show was originally filmed, the thought of it showing up on a home video format years later was never even considered. The show is presented here in its original full screen format, which is perfectly acceptable. What is not acceptable, however, is the rest of this horrible transfer. This disc looks much more like a VHS recording than a modern DVD release. The episodes are out of focus, grainy and dull. Also, the colors bleed badly, which really just works to makes a bad transfer worse. Put simply, these episodes just plain look horrible.

Nothing, not that I’m surprised. Honestly, all that could really be done would be to add some cast and crew commentary tracks, and there is really nothing to say. He episodes themselves are lacking any sort of meaningful plot lines, so really how much could a commentary add? To me, the fact that there are no extras here should be seen as the producers having mercy on hapless reviewers like myself. I appreciate the thought.

It’s bad enough that this show was released on DVD at all. The fact that it comes with horrible picture and sound quality and no special features just takes a bad thing and makes it worse. The only positive comment that I can make is that if you actually are a fan of this show for some unknowing reason, the price is right. You should be able to find the complete season for something in the $22 range, which is just about right for a show of this quality. Having said that, I can’t imagine why anyone would actually want to watch this release.