Posted in: Disc Reviews by David Annandale on April 2nd, 2007 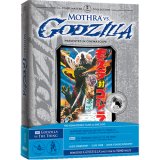 A ferocious typhoon washes up a giant egg on Japan’s coast. Unscrupulous entrepreneurs lay claim to it, planning to exploit it as a tourist attraction. The egg in fact belongs to Mothra, now nearing the end of her life cycle, and the twin fairies from Infant Island come to Japan in the hopes of having the egg returned. No such luck, but when Godzilla returns and begins another rampage, this time it is the inhabitants of Infant Island who are turned to for help in the hopes that Mothra will come to Japan’s aid.

This was one of the Godzilla films that was least hacked about for its American release (the running times between the two versions here differ by less than 30 seconds), and of the first series of Godzilla films (running from the 1954 original to 1975’s Terror of Mechagodzilla, this is arguably the best after the first. Colourful and exciting, with lively monster battles that never undermine the dignity of the creatures, this is Toho at the top of its game.

No stereo remixes here, but the mono is very big, and Akira Ifukube’s magisterial score, though occasionally distorting a bit, generally sounds terrific, as do the various explosions and roars. So some slight buzz notwithstanding, the sound is clean and very loud. Which is all to the good.

The Japanese version of the film is in 2.35:1 anamorphic widescreen, and the US one is in 1.78:1 anamorphic. The prints are in very nice shape. Damage is essentially nil, and the grain is minimal to none. The image is a little bit soft, but hardly enough to affect one’s enjoyment. A very nice transfer.

Steve Ryfle and Ed Godziszewski share the audio commentary (on the US version), and do a fine tag-team job, presenting relevant interview clips to further flesh out their discussion. Gidziszewski also narrates the biographical featurette on Ifukube. The Japanese theatrical trailer is here, and there’s a poster slide show.

Classic Media has done another bang-up job with this release. One can only hope that it won’t be long before the next installments of this series.