Posted in: Disc Reviews by Archive Authors on May 8th, 2007 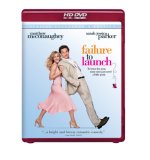 I will admit that on occasion I have enjoyed a romantic comedy or two, and when I initially saw the trailer for Failure to Launch, I anticipated it to make the list. Aside from the film’s stars Sarah Jessica Parker and Matthew McConaughey, Failure to Launch has a rather well assembled list of co-stars, including Kathy Bates (Misery), Terry Bradshaw (Former NFL Quarterback), Justin Bartha (National Treasure), and Bradley Cooper (Wedding Crashers). Sounds good enough, how does it turn out?

Matthe… McConaughey plays Tripp, he enjoys a successful career as a high end boat broker, he drives a Porsche, and he spends all his free time outdoors maintaining his six pack. Sounds like quite the bachelor. There’s only one drawback – he’s 35 and he lives with his parents. Whenever a relationship is getting too serious he brings the girl home, she discovers he lives with his parents, and as a result breaks up with him. Life seems good for Tripp and his buddies who also live at home, they spend their free time swimming with the dolphins, mountain biking, rock climbing, paintballing, and well anything physical. Well, things turn upside down when Tripp’s parents hire Paula (Sarah Jessica Parker) to get Tripp to fall in love and finally get him to move out. But things get complicated when Paula actually starts falling for Tripp. Was their love doomed from the beginning? Or will these two end up with each other? Well, I think you all know the answer, but to find out for sure you’re going to have to watch the movie.

Failure to Launch turns out to be an enjoyable romantic comedy, and while it’s never really laugh out loud funny, it is constantly quite humorous. Of course you can expect the same old laid back, smooth Texas charm from McConaughey, and the happy innocence of Sarah Jessica Parker. The characters in this picture aren’t particularly deep, although there are a few surprises in the character arcs they are for the most part pretty cardboard and their actions predictable. Without the real presence of emotion or awfully troubled characters I would dub Failure to Launch as more of a comedy than anything, and it works out quite well.

Aside from the main focus of Tripp and Paula’s relationship, there are several ongoing storylines as well, including the love lives of their friends, and their relationships with their friends a family. Some of the most entertaining parts of the movie are when Tripp is out with his buddies where he continually attacked by animals.

This is one of those rare moments where I’ll actually compare romantic comedies. My favorites of this genre are always British; the Hollywood versions are often clichéd and predictable. The thing I like about Failure to Launch is that aside from being a typical Hollywood formula, it focuses more on the comedy than the romance, and turns out to be a pretty enjoyable movie. So for those of you who despise having to sit through a romantic movie, I’ll suggest this one, it’s not so bad to sit through if you can get past McConaughey using every possible opportunity to take his shirt off.

Presented in a 1080p 2.35:1 aspect ratio, the HD DVD release of Failure to Launch impresses and continues Paramount’s current streak of solid transfers. Almost every aspect of this transfer looks good, although there are a few minor nitpicks here and there. The source material is in great shape, with no real blemishing on the films print. Both Sarah Jessica Parker and Matthew McConaughey look like they spent a bit too much time in a tanning booth but flesh tones do have realistic hues. Detail remains constantly good throughout; every wrinkle on Terry Bradshaw’s face as well as every hair on his balding head is clearly seen with fine detail. While flesh tones and detail remain solid I felt the rest of the colors used in the film were a bit oversaturated, often looking too bright in many places. Again Paramount has encoded this disc with VC-1 and like DreamGirls both a HD DVD and Blu-ray versions look identical.

Paramount has included what is becoming a standard for their HD DVD releases – a Dolby Digital Plus 5.1 audio track. This time the Plus track sounds slightly better than the one found on the Blu-ray release. Bass levels sounded a tad richer as did the rest of the channels but the difference is slight. Thankfully either track sounds good even though the film relies heavily on the front channels. There are a few parts in the movie that will use all the channels, for instance the scene where Tripp and Paula go paintballing. This scene in particular used sub and rear channels effectively, creating the atmosphere as if you were actually there. Besides a few scenes like this there isn’t much here that will test your sound system but the material is presented very well.

Included on the disc are decent amount of features that provide some entertainment value, unfortunately a couple of the features feel like promotions for other companies and don’t really provide that much information related to the movie. It is also a slight disappointment to see these features in standard definition as Paramount usually presents them in HD.

Better than most romantic comedies, but still not overly fascinating; Failure to Launch is a good watch, and a pretty good bargain on HD DVD for fans of the film. The audio and video are impressive but the features are somewhat lacking. The audio is slightly better in this version, so people with both players may want to take notice. So for those of you who haven’t seen it yet, check it out because it’s a good alternative to a lot of the garbage out there.