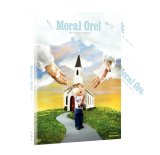 Moral Orel airs on Adult Swim, and like a lot of programs on Swim, each episode is about 12 minutes long. After watching only a few episodes, I just knew this show must face a lot of criticism. A lot of the subject matters are pretty touchy – from the eleven year old Orel smoking crack to him impregnating the neighborhoods mothers. Although pretty much all races and denominations take a shot throughout this show, the blunt of all jokes are taken by Protestants. Without getting into a whole religious tirade, I’…l say that as a Christian I don’t find this show overly offensive. Sure there are some things I don’t like about the show, or views that are expressed, but you have to take it with a grain of salt. With that being said, this show isn’t for everyone. A lot of Christians will probably find it offensive, but if you look past the initial shock of some of the jokes, this show can be pretty funny.

The premise of the show is simple. It begins with Orel listening to his Reverend dictate a passage from the bible, then the rest of the episode is based on Orel taking this lesson way to literally. This show is so far out there, how could it be offensive?

Some people refer to this show as pure genius, or that it provides some great social commentary. That’s completely ridiculous. This show is completely ridiculous and that’s what makes it funny. Moral Orel is comparable to South Park, sometimes just completely out there, and on an episode to episode basis it can be hilarious to dull. My favorite episode of the set is one where Orel becomes addicted to crack because of a lesson his father tried teaching him. Although there is nothing funny about children getting addicted to a life ruining drug, somehow it was hilarious. Somehow Moral Orel has a way of making things that aren’t funny, funny. Ranging from beating homosexuals with baseball bats too burning books on Judaism, Morel Oral is sure to offend just about everyone.

I find myself very mixed about this show, as I mentioned some episodes are funny, and others are just stupid. But the main thing you have to consider when watching this show is let your guard down. It would be hypocritical to say this show is trash because it depicts Jewish people in a negative light, but then laugh when it depicts Christians in the same light. So either you love it or you hate it.

Presented in 1.33:1 aspect ratio, Morel Oral looks the best a stop motion feature that airs on Adult Swim could possible look. That’s not to say it looks good, because it doesn’t, but considering what it is, it’s not the worst I’ve seen. Mostly everything looked washed out, nothing was sharp and all colors were dull. In comparison to the episodes aired on Adult Swim, this collection does however look slightly better, so it’s not all for nothing.

Warner Brothers has included the original 2.0 Dolby Stereo track, which I think pretty much speaks for itself. Obliviously nothing that’s going to knock your socks off but it does the trick for a show like this that really requires nothing more than just a stereo track. At times I noticed some balancing issues with the dialogue track, but other than that there was nothing notable to mention.

Moral Orel, Volume 1 comes with a decent amount of features that should answer most of your questions related to the show, and even offer up a few additional laughs.

This show isn’t for everyone, and I’m sure most people would find it offensive. For those who can take this material lightly, it’s funny. I still prefer South Park, but this is a good alternative; something to just throw in and enjoy without having to use the old noggin too much. The features are pretty decent and although the audio and video aren’t overly impressive, they look and sound as good as they can I’m sure. If you already like the show then go ahead and buy this set, and if you’ve never seen it before check it out on Adult Swim before you buy it.