Posted in: Disc Reviews by Archive Authors on October 14th, 2007 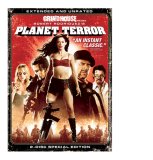 Separating these two schlock-fests begs the question, which one’s better? Don’t ask me. I didn’t catch Grindhouse in theatres, and haven’t gotten around to Deathproof on DVD. All I can tell you is Planet Terror throws down 105 minutes of mindless, campy and gory fun. So pop your lid, take out your brain and enjoy. But don’t leave that brain unattended, ’cause there be zombies about.

In Planet Terror, a rag-tag bunch of folks take on a legion of zombies created by the release of a bio-chemical weapon. Rose McGowan (The Black Dahlia) is Cherry, a go-go dancer whose bad evening becomes a terrifying night when zombies attack her, making a meal out of her leg. Thankfully, her ex-boyfriend, El Wray (Freddy Rodriguez, Six Feet Under), is back in town, ready to take charge if he can only get the cops off his back. No one explains why, but those cops don’t want El Wray anywhere near a gun, even when a horde of zombies attacks the police station. Later we see what El Wray can do with just a pair of knives, and we understand the cops’ reticence. El Wray is a dangerous man. And when zombies are taking over the world, he’s just the guy you want on your side.

There’s more to it, but I’d hate to spoil the fun of discovering just how the other stars, like Marley Shelton (The Last Kiss), Josh Brolin (Into the Blue), Michael Biehn (Aliens), Naveen Andrews (Lost), Quentin Tarantino (From Dusk Til Dawn) and Bruce Willis (Die Hard) fit into Rodriguez’s ode to exploitation b-movies.

Unfortunately, Planet Terror isn’t quite fun from start to finish. The film has its share of lulls, and there are plenty of gags present “just because,” as we learn from Rodriguez on the commentary and in the bonus materials. There were a lot of disparate ideas and one-offs the director has been wanting to fit into one of his flicks for some time, and he threw the whole lot into this zombie fest just because he could. The result is uneven, but there are enough great moments to keep viewers interested.

Frankly, the best part of Rodriguez’s half of Grindhouse isn’t found anywhere in Planet Terror‘s 105-minute running time. The real highlight is his mock trailer for Machete, which opens for the main event. Starring Danny Trejo (Once Upon a Time in Mexico) as Machete, a Mexican day labourer-slash-hired killer and Cheech Marin (Tin Cup) as a shotgun-toting priest, Machete is the best, campiest trailer you’ll ever see. In fact, it seems to me that this is the film Rodriguez should have made instead of Planet Terror.

Presented on two discs, with the feature film on disc one in 2.35:1 anamorphic widescreen format, Planet Terror‘s video quality is a tough case to judge. You’re most likely aware that the filmmakers intentionally deteriorated their Grindhouse films to get that old film reel look. While it was shot digitally, and could have been near-perfect, Planet Terror is instead all over the place with a dizzying array of intentional film artifacts. The special part is that since these were applied on purpose, Rodriguez could pick and choose which artifacts to apply and when to do so. As he explains in the bonus materials, the director took full advantage of this situation, using the deteriorations to enhance all sorts of moments in Planet Terror, from zombie attacks to the claustrophobic elevator scene when Tarantino’s character begins to antagonize the female leads. It’s a cool aesthetic that definitely helps create the viewing experience Rodriguez was going for, but it’s certainly not something you’ll use to show off your new 50″ plasma.

Main audio is Dolby Digital 5.1, and it forgoes the deterioration of the visuals for a primo surround sound experience. Planet Terror‘s audio is big, loud and moody, making viewers honorary deputies in the battle to survive the hordes of flesh-eating zombies. From the mouth-watering sounds of zombies chowing down on tasty brains to big explosions and Cherry’s iconic and devastating machine-gun leg, your system will have plenty to do all around.

DD 5.1 audio is also available in Spanish, while subtitles are offered in English and Spanish.

This two-disc special edition release offers up a zombie’s feast of special features, with plenty to sink your blackened, rotting teeth into. Here’s the rundown:

As my first taste of the Tarantino/Rodriguez Grindhouse project, this Planet Terror two-disc special edition has whet my appetite for more of its schlocky, so-bad-it’s-good entertainment. The film might not be the best thing ever, but the discs’ excellent bonus materials raise this release to must-buy heights. Be warned, though — Rodriguez says in the extras that there will eventually be a double-dip release packed with even more of the Grindhouse experience.