Posted in: Disc Reviews by Archive Authors on October 27th, 2007 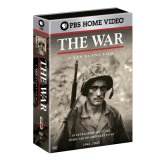 I don’t think any documentarian in history has been as famous as Ken Burns. His series on the Civil War is what first made him a household name, and his in depth looks at baseball, New York City and jazz are what has solidified his place in the American consciousness as the world’s premiere documentary filmmaker. He is so well-respected, in fact, that his method of making still photographs interesting by zooming and panning is actually known as the Ken Burns Effect.

Burns’ latest film endeavor focuses on World War II, which may be the most covered documentary subject in history. This topic should present his greatest challenge; a subject that has millions of experts and thousands of pre-existing documentaries, including the very well respected “The World At War”, which is considered the gold standard. There are still many veterans of the war alive today, which could be both a blessing and a curse. While they can certainly help with insight into key events, they are also the first to criticize if the film does not accurately portray the battles as they transpired. It is a tall order, but if anyone could meet this challenge, Ken Burns is the one to do it.

As would be expected, he knocks it out of the park.

I was having a hard time imagining how Burns would tackle such an enormous subject as the entirety of World War II. Granted, the complete series runs fourteen hours in length, but we are talking about a truly worldwide war, the American portion of which stretched on for four torturous years. By the time I was an hour in to the film, I had my answer, and it was a brilliant move. You simply can’t tell everyone’s story, so why not focus on thoroughly telling the story of a few? Burns takes four typical American towns: Sacramento, CA, Luverne, MN, Mobile, AL and Waterbury, CT, and tells their story. We follow the citizens of these small towns – those at home and those overseas – as they are thrust into a war that they did not want, and then watch their determination and bravery as they surpass impossible odds to keep the world safe and free for all people. The big picture of world events are addressed as well, but the beauty of this film lies in how those large world events affected the lives of families and soldiers on side streets in small towns in middle America.

It’s refreshing to see a documentary on this subject that bypasses the usual patriotic line on America’s feeling of duty to rid the world of evil, and tells the real stories of farmboys looking for adventure, career-minded young men looking to line their pockets and black men looking for freedom, while fighting for a country that still did not see them as equals. Some of the images here are hard to watch, but the reality of the war is presented in a way that is both entertaining and fascinating.

Video
I was pretty disappointed with the quality of the video here. Obviously, I wasn’t expecting detail much from the archival footage and old photographs. However, the newly-shot interview footage looks pretty rough as well. Colors seem to be a bit off, skewing a toward red in many faces. The images are also not as sharp as I was hoping they would be. The whole thing has that unfortunate public broadcasting look to it, which gives the impression that maybe not every possible effort was made to present the story with the best quality possible. It is completely watchable, but it is just not as sharp as I was hoping it would be. I could best describe the quality as “good analog cable”. Still, the film is presented in widescreen, which is great to see. Hopefully, with the growing popularity of high definition televisions, the end of the standard definition documentary is drawing near.

Audio
Burns has done some really interesting things with the audio. Interview segments are clean and clear, just as one would hope. The archival footage, however, has been layered with additional audio that really makes the old footage come to life in a way that I have never experienced before. Something about that old footage makes the usual images seem too distant to really be able to identify with. With the powerful new audio, however, the images are driven home on an emotional level that I have never experienced before. Watching the first bombs softly flutter toward Pearl Harbor was entirely familiar, but the first powerful (and completely unexpected) explosion literally made me jump off the sofa. This was an amazingly-insightful decision, and one that I am absolutely thrilled to hear.

Special Features
While this boxed set is pretty slim on extras, I was honestly quite surprised to find any here at all. A documentary is kind-of a special feature in itself, so the idea of added content always reminds me of that episode of “Mad About You”, where Paul Buchman was hired to direct “The Making Of: The Making Of ‘Titanic'”. Having said that, Burns has struck a nice balance between presenting some edifying extras that would not easily have fit into the context of the film, but still add quality information for viewers.

In addition to the predictable collection of additional interviews, there are also some deleted scenes that I can only imagine were cut for time; an odd but necessary thing to do in an epic film that has to fit into television time constraints. Viewers will also find full commentaries on two episodes by Ken Burns and Lynn Novick. These commentaries, while interesting, really felt more like production meetings to me. There wasn’t a lot of additional insight into the stories being told throughout the film, as much as there was discussion about the filming process itself. Interesting, but the two commentaries are plenty.

Final Thoughts
Be prepared to set aside a full weekend to experience this epic film. Once they start, viewers will be hard pressed to press the stop button on their DVD players, save to quickly change discs. The storytelling is at once educational and compelling, and while the video quality is not the greatest, the powerful audio presentation makes up for it. The packaging is first-rate for a PBS documentary, housed in a box that recalls the wonderful “Soprano’s” season sets. The short version is, Ken Burns has done it again.