Posted in: Disc Reviews by Gino Sassani on December 21st, 2007 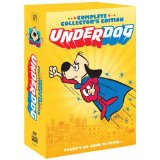 Something strange happened to me this week. I had two particular films arrive that I was to review. Stardust and Underdog. I expected to love one of them and basically tolerate the other. If you’ve read my recent Stardust review, you already know which was which. I expected to love Stardust and ended up hating it. I expected just a lot of silly nonsense from Underdog, and that’s what I got, except I had a great time watching it. The film is far more entertaining even to adults than I ever could have imagined.

First off, this is not the Underdog you remember from the 1960’s cartoons. While Disney does a good job of showing some respect to the source material, this effort is quite different. The differences are necessary in order to create a believable enough live action film. You’ll have to face the fact that your kids don’t know our Underdog, so it’s not like the target audience will feel cheated. Be glad that there’s enough of a homage to the original to force an occasional nostalgic smile from time to time.

Shoeshine (Lee) is a police beagle who works for the Bomb Squad. Unfortunately for Sunshine, his nose isn’t quite up to snuff, so to speak. When he mistakes a ham for a bomb, a courtroom is panicked and Shoeshine runs away in disgrace. He doesn’t get far when he is captured by Cad (Warburton), the assistant to mad scientist Simon Barsinister (Dinklage). It seems Barsinister has developed a new DNA experiment to make super dogs. In his escape Shoeshine is exposed to the treatment and develops superpowers. He’s brought home by one of Barsinister’s guards, Dan (Belushi). Dan gives the pup to his rebellious son, Jack (Neuberger) who bonds to Shoeshine once he discovers his many powers, including the ability to speak…English. Shoeshine develops a taste for stopping bad guys disguised as the caped canine Underdog. Together they must defeat the nefarious plans of Barsinister and save .

This is a perfect children’s film on almost every level. The dog is actually pretty cute, and the CG enhancements look completely natural. Jason Lee is a wonderful choice to voice the pup, and he’s able to inject a lot of emotion and range into the dog’s performance. The bond between Alex Neuberger playing Jack and the dog is refreshingly real. Peter Dinklage is always pretty good, and he grows into the part of Barsinister throughout the film. Whether intended or not, the character evolves from almost normal to mad genius as the film progresses, so that we get a lot more depth out of our villain than traditionally with these kinds of films. I could do without the rap-transformed Underdog theme. I’m sure it will sit OK with the kids, but I had to watch the credits with the volume down. The flying f/x are as good as anything I’ve seen. There’s a ton of silliness, but it seldom digresses into the toilet humor so common in children’s entertainment today. I did have a little trouble with Amy Adams as Polly Purebred. Her voice is far too giggly and just doesn’t sound all that natural coming from the dog. Brad Garrett is perfect as the voice of Shoeshine’s canine nemesis, Riff Raff. Taylor Momsen looks a little green playing Polly’s owner, Molly, but she works well for the part she’s given. The movie moves at a fast enough pace that the youngsters won’t grow restless. There are plenty of cheer moments, and the peril never gets harsh enough so that your tots will get scared. This is definitely one to put into the kids’ rotation. Good enough so that parents will enjoy. Silly and cute enough to hold your youngster’s attention.

Underdog is presented in its original aspect ratio of 1.85:1. You do get a choice of full frame. I have a major complaint here. First: The film defaults to the full screen version. Second: How do you select the wide version? Good question. It took me 10 minutes to figure it out. Finally I discovered this picture option, where else but the AUDIO options. Right where it belongs….Not. Anyway, once you’ve found the wide version, you will be very happy you did. The picture contains vivid color and sharpness. The transfer is visually stimulating, which is necessary for the kids. Underdog’s blue and red costume looks great on screen. Mad scientist fluids come in all kinds of dynamic colors, but if you’re needle shy there are unfortunately a bunch of them in the beginning of the film. Black levels are nearly perfect, and the transfer is clear of any print defects. I was surprised to find little to no compression artifacting as both versions of the film are included. The bit rate stays at a decent 5-6 mbps.

The Dolby Digital 5.1 track is just as stimulating as the picture. You are treated to plenty of surround effects as Underdog zooms around you from place to place. Dialog is always clear. The music is a little too bottom heavy, particularly for such a young target audience.

Deleted Scenes: There are 3 deleted scenes that pretty much add little to the story.

Bloopers: There are also a few bloopers in the end credits. A couple minutes more of the same mess-ups and such can be found here.

Sit, Stay, Act – Diary Of A Dog Actor: The kids will like this spoof of an actor’s diary of the making of a film. Jason Lee once again voices Shoeshine, who takes us on a tour of how the film was made from his eyes. There are these moments when the words “dig deeper” appear on the screen. If you press enter on your remote you will get a 2-3 minute sidetrack piece, much like an Easter egg. These go a little more in depth on whatever subject Shoeshine is talking about in the feature. Be warned, you are not returned to the exact stopping point and need to backtrack a few seconds to see the entire feature.

Underdog Raps: This is the music video of the new rap version of the theme. Saw a lot of horror films this year, but this piece might just be the scariest thing I’ve seen this year. Subtract 1 extras rate point.

Safe Wail: One of the nicest features to come along in a long time is the very first cartoon episode of Underdog. Of course, it ends with an advertisement for the cartoon DVD’s which, naturally, have come out around the same time as the film hit the box office.

Pretty much everyone my age has seen Underdog. I was never a huge fan, but I did watch it as a kid, and it kept me out of trouble, I’m sure. I must admit I thought this film would be a little painful to watch. Instead, I had some friends over and we all had a remarkably good time. This was particularly important, as the same group was forced to sit through Stardust the day before. We were all feeling a little sting, but “There’s no need to fear. Underdog is here.”

Gino Sassani is a member of the Southeastern Film Critic's Association (SEFCA). He is a film and television critic based in Tampa, Florida. He's also the Senior Editor here at Upcomingdiscs. Gino started reviewing films in the early 1990's as a segment of his local television show Focus. He's an award-winning recording artist for Omega Records. Gino is currently working on his 8th album Merchants & Mercenaries. Gino took over Upcomingdiscs Dec 1, 2008. He works out of a home theater he calls The Reel World. Favorite films: The Godfather, The Godfather Part II, The Body Snatcher (Val Lewton film with Karloff and Lugosi, not the pod people film), Unforgiven, Gladiator, The Lion King, Jaws, Son Of Frankenstein, The Good, The Bad And The Ugly, and Monsters, Inc.
Return to House on Haunted Hill (Unrated) No, You Are Still Not A Legend