Posted in: Disc Reviews by Michael Durr on February 19th, 2009

Sabrina, the Teenage Witch is a character that actually originated in 1962. She debuted in Archie Comics for the publication Archie’s Mad House issue #22. She was intended to be one of those one-shot characters, but the audience liked her so much that she found a home in Archie Comics for a while, even getting her own book starting in 1971. In 1996, a television show was launched. It would last seven seasons and one-hundred and sixty three episodes. This was a great run for a show that was only created to bring a little bit of magic into everybody’s lives.

Sabrina Spellman (played by Melissa Joan Hart) has enrolled into Adams College. She decides to leave behind her aunts, Hilda and Zelda (played by Caroline Rhea & Beth Broderick) and move into the dorms. Salem (voiced by Nick Bakay), her talking cat (he’s really a trapped warlock) also can’t come as she must try to adjust to college life alone.

Once she finds a dorm to stay in, she is introduced to three new friends. There is the acting RA Morgan Cavanaugh (played by Elisa Donovan) who is more interested in her own looks than anybody else around her. There is also Miles Goodman (played by Trevor Lissauer) who is obsessed with physics and outer space. Finally, there is Roxie King (played by Soleil Moon Frye) a social introvert with a hard shell who would rather keep to herself. Sabrina finds trying to fit in is much harder than she thought.

Things however start to change. Hilda and Zelda start to get lonely and long to be closer to Sabrina. Zelda takes a job at the college as a professor while Hilda decides to buy the local coffee shop where Sabrina & her ex-boyfriend Harvey Kinkle (played by Nate Richert) works. Even Salem finds a way to pop in for every episode as he misses Sabrina. Can Sabrina adapt to college life despite her aunts’ meddling and gain new friends and a love interest despite her lingering feelings for Harvey?

This was the first season where the series had moved to the WB, away from ABC. The series also shifted in tone of Sabrina going to college and pulling away from her aunts. Even though they still tagged along in most of the episodes, they were clearly secondary characters at this point. Sabrina was in a word growing up. The characters, Roxie and Morgan would be involved with Sabrina until the end of the show’s run as they proved to be very popular as Sabrina moved into adult hood.

I had watched the show on and off through the year and found it charming light fare. But I have to ask one question because I don’t remember this being the case and perhaps I stopped watching the show when it left ABC. When the heck did Melissa Joan Hart get so hot? She is smoking. Furthermore, the show’s producers must have realized this and put her in much more revealing clothes. (Don’t worry boys, she has the Veronica Mars syndrome, when this season aired she was already 24 years old in real life). This show also now features Soleil Moon Frye all grown up. Don’t know who Ms. Frye is? She’s Punky Brewster. Yes, that Punky Brewster. She’s turned out just as hot as Melissa Joan Hart did. Those two alone would turn most men into a puddle of drool and spell success for the show.

As for the show after the babe effect, it had a lot of laughs. The show did lose some steam after moving to the WB but the show would continue for this season and two more. It was a cult favorite among many and one of the last great sitcoms, especially in the 90’s and 00’s. The episodes were for the most part well planned out and didn’t always go for the cliché. Some of the plots probably seem dated now, but they consistently provided laughs.

The show is presented in 1.33:1 Fullscreen. I really can’t fault it for being in fullscreen, all shows were back then. However, the video quality is to be desired for a show made in this decade. There is a good amount of grain and some dirt on the images. It doesn’t look like they cleaned up this set very much but it is serviceable for those who aren’t looking for perfect.

The audio is in English Dolby Digital 2.0. This performs a little better than the video and doesn’t feel that canned (except for the laughter). Dialog is good and clear and the action moments don’t sound too bad. Suffice to say if you liked the show, you’ll know what to expect here.

The fifth season of Sabrina – the Teenage Witch had the show on a crossroads. There was a shift to a new network, Sabrina going to college, and shifting away from always having the aunts coming in and saving the day. One could honestly make an argument to collect only the first four seasons or collect only the last three seasons. There really is a difference in tone and show content. The show is however still funny up and down. Melissa Joan Hart and Soleil Moon Frye will draw in young male viewers who are looking for hot women and a more grown up show. However there is still enough of the original four seasons in the last three seasons of Sabrina to keep the core fans happy. Recommended.

Sabrina, The Muse
Beach Blanket Bizarro
Witchright Hall
Sabrina, The Activist
Do You See What I See
Sabrina’s Got Spirit
Finally! 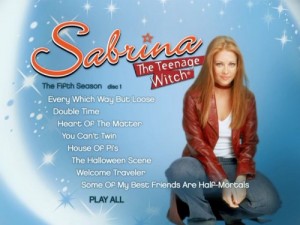 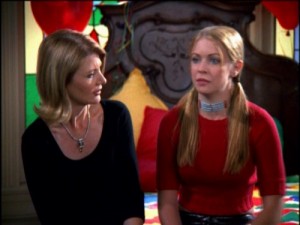 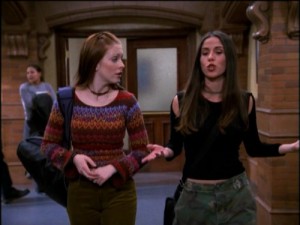 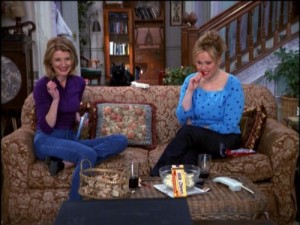 Michael Durr has been reviewing movies for the better part of fifteen years now. He primarily enjoys thrillers, sci-fi, animation and even a little courtroom drama. His favorite films include Escape from New York, the Goonies and anything with Alyssa Milano. When he’s not praising Kurt Russell as the greatest actor of our time or scratching his head over a David Lynch flick, he’s spending time at home in Texas with his lovely wife, Lori and his amazing son. How they put up with him is a mystery, but even Basil Rathbone doesn’t have the time to solve that one.
Depth Charge I Love The 80’s: Still Smokin’