The WTO or World Trade Organization came into being on the 1st of January in the year of 1995. It was the successor to GATT (General Agreement on Tariffs and Trade) and was designed to supervise and liberalize international trade. In their ministerial conference of 1999, they decided to have the conference on US soil. The site chosen was Seattle, Washington. The WTO had drawn criticism from protestors around the globe that proclaimed that the WTO was pursuing commercial interests ahead of human principles. In 1999, the WTO convened at the Washington State Convention and Trade Center. Protestors came by the thousands and soon despite their peaceful efforts, riots ensued. There was mass police involvement. It also gave way to some of the more horrific scenes of innocents and guilty arrested alike. Battle in Seattle is a docu-drama directed by Stuart Townsend that mixes a drama-thriller with the real events that surrounded the days that followed November 30th, 1999 in Seattle, Washington.

Jay, Lou and Django (played by Martin Henderson, Michelle Rodriguez, and André Benjamin) are three activists who are planning a mass protest at the 1999 conference of the World Trade Organization in Seattle, Washington. Meanwhile, a SWAT cop named Dale (played by Woody Harrelson) gears up for that same conference in order to keep the peace. His mind is not on the protestors, instead his mind is focused on his wife, Ella (played by Charlize Theron) who is five months pregnant.

Looking over the conference and the proceedings is the Mayor of Seattle: Jim Tobin (played by Ray Liotta). He is attempting to keep the peace in his city and also allow both the protests and the conference to both exist amicably. However, what starts out as a peaceful protest by the activists and labor unions alike turns into something else. Streets are blocked and traffic is held up. But those events are nothing when anarchists take over and the event turns unlawful and violent. The police are forced to respond and take control. But in an attempt to thwart the anarchists and control the peaceful protest, can they insure that the law abiding activists get their say and that innocent bystanders are not harmed in the process? Only time will tell.

This is another one of those films that I admit I was on the fence about. I certainly wanted to review the film but I was concerned that it was merely a piece to push political agenda. However, I was pleasantly surprised. Stuart Townsend’s directorial debut is a smashing success. He brilliantly blends real footage with the drama that he unfolds. His gift here is to create a story within a story. He is also the benefactor of a great cast. From the always talented Charlize Theron who played Ella to remarkable performances from Martin Henderson and Ray Liotta.

The most surprising good performance I found was actually from Woody Harrelson. He had kinda fell off the radar with me but easily turned in a well done job as Dale. I was also happy to see Channing Tatum show up in another movie I had to review. You might remember him from my review: A Guide To Recognizing Your Saints. Here he plays a good small role as Johnson, another SWAT cop who is caught in the fray when he has to go upstate to fetch more tear gas for his team. Cast aside, the movie is a thriller. There are no bad guys here and very little black and white. Many share the same cause in a movie that clearly does have political agenda but doesn’t attempt to hit you over the head with it.

The dvd is presented in 1.78:1 Anamorphic Widescreen. Since the picture is both a mixture of real footage and scenes shot for the movie, it will obviously switch in quality. For the most part, the colors are good and scenes look good. One of the nice things here is that the scenes do feel like they belong together and hardly create any jarring effects. Lighting is also excellent even in the darks creating for a pleasing well shot docu-drama.

The film is recorded in 5.1 English Dolby Digital. True, this is one of those films where talking is the biggest focus or the combination of talking and chanting (protesting). Most of the talking stays in the center channel and stopping to use the occasional surround effect. There are some action sequences when the violence escalates and there is some good sound depth in the use of breaking glass. Subtitles are provided in English and in Spanish.

While the events from November and December of 1999 in Seattle, WA did close the WTO proceedings for that year, the impact has not been fully realized. Today, the WTO is attempting to cater to third-world countries more closely but still finds decision making difficult as it attempts to curb protestors and be able to conduct business efficiently and equally. The movie Battle in Seattle is a great debut for Stuart Townsend in the directorial chair. He has a remarkable cast to work with and each of them provides a sufficient effort. The disc is adequate and blends video & audio from real and shot footage almost seamlessly. The extras are kinda thin but the commentary is very informative. I do recommend the disc. Even though the political agenda is present, there is some wonderful drama here that will give you quite the workout for an hour and a half. 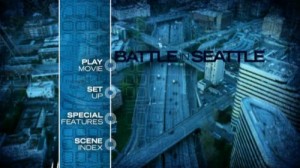 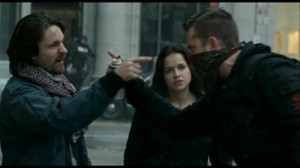 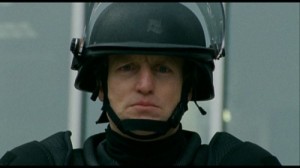 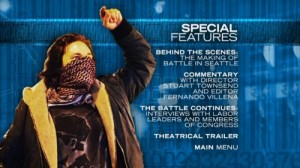 Michael Durr has been reviewing movies for the better part of fifteen years now. He primarily enjoys thrillers, sci-fi, animation and even a little courtroom drama. His favorite films include Escape from New York, the Goonies and anything with Alyssa Milano. When he’s not praising Kurt Russell as the greatest actor of our time or scratching his head over a David Lynch flick, he’s spending time at home in Texas with his lovely wife, Lori and his amazing son. How they put up with him is a mystery, but even Basil Rathbone doesn’t have the time to solve that one.
The Spectacular Spider-Man, Vol. 2 & 3 The Nanny – The Complete Third Season