My history with Westerns isn’t exactly a vast one. I watched a bunch of Westerns with my dad growing up and I continued to watch the bigger ones of the modern era like Tombstone and Unforgiven as I progressed through my teenage years and young adulthood. John Wayne is kinda a mystery to me. He’s a huge gritty guy with a lot of patriotism and a funny way of talking. For lack of a better analogy, Sylvester Stallone is my generation’s John Wayne. Or Chuck Norris I guess. El Dorado is an interesting western flic because it was shot later in John Wayne’s career but he had still had the swagger of earlier pictures. A true classic revisited by the minds at Paramount.

Cole Thornton (played by John Wayne) is a gunslinger for hire. He’s been hired by Bart Jason (played by Ed Asner) for some help in a ranch dispute with the McDonald family. Cole rides into El Dorado and is approached by his friend: Sheriff J.P. Harrah (played by Robert Mitchum) who tells him the real tale of the ranch dispute. Cole also finds out that Jason eventually would have put him in a gunfight with the Sheriff. This is something that he didn’t want to do.

The Sheriff and Cole are approached by Maudie (played by Charlene Holt) for a drink. The two learn at this point that Maudie has had relations with both of these men but apparently she is more than enough woman to be able to handle them. Cole rides off to the Jason ranch and quits on ole Bart. Bart isn’t too thrilled but understands. Meanwhile, the McDonalds apparently didn’t get the memo about Cole and instead are on the lookout for him. They put young Luke (played by Johnny Crawford) out on a hill but unfortunately he falls fast asleep.

Along comes Cole. Luke suddenly wakes up and fires a wild warning shot. Cole does not see the young boy and reflexively shoots in the direction and severely wounds Luke. Cole gets up to the hill and realizes his mistake. Cole tries to make the boy more comfortable but the boy takes his handgun and commits suicide when Cole is not looking. Cole delivers the body to the McDonalds who are naturally upset but understanding. That is except for one McDonald, Joey (Josephine) McDonald (played by Michele Carey).

Joey plots her revenge and decides to sneak up on Cole as he leaves the ranch. The young girl sets up on a hill as Cole and his horse wade through a stream. She shoots him and knocks him off his horse. As Joey goes over to the body, Cole trips her leg and sends her sprawling into the water. We later find out that Cole did receive a nasty gunshot wound, one that needs to be treated by a special doctor. As a result, Cole will receive spasm attacks from time to time since the bullet is pushing on the spine of the gunslinger.

Six months pass. Cole Thornton is sitting in a saloon with a couple of ladies as a man (played by James Caan) walks in. The man is simply known as Mississippi and he wants revenge. His specialty seems to be knives as he floors one of the men responsible for killing his friend “Diamond”. The dead man with the knife in his chest belongs to the gang of Nelse McLeod (played by Christopher George). Before Mississippi finds himself in more trouble, Cole steps in. Cole learns that Nelse took the job Cole turned down six months ago.

Cole and Mississippi decide to head back to the town of El Dorado to warn & help the sheriff. The problem is that J.P. Harrah has been consumed by booze. He’s been turned into a drunk because of a woman (never named). Cole and Mississippi are joined by a deputy named Bull Harris (played by Arthur Hunnicutt). Together they must get the sheriff off the whiskey bottle and the four of them must try to stop not only Nelse McLeod and his arriving gang but the ongoing threat of Bart Jason to protect the little town from utter chaos.

As you can tell by the lengthy plot detail, there is a lot going on and it is particularly slow to develop. But in a sense, the movie does something very well, it tells a story. It doesn’t matter how long it takes to get there, it just makes sure that everything makes sense. The director, Howard Hanks does a fine job here of handling a wide range of talent from the Duke to Robert Mitchum to emerging star: James Caan and many others. As mentioned, John Wayne still has his swagger but tends to not be involved in as much action as he had in previous films. Mitchum and Caan’s performance were amazing and showed range as well as humor.

Humor actually shows up a lot which is odd for a Western film that isn’t followed by the name Blazing Saddles. The Duke often takes punches at the characters and they often punch right back. But it is also genuinely funny and doesn’t take away from the story which stays strong until the brutal end. My first real fault with the film is the lack of closure on this gunshot that Wayne reacts to every so often like a mysterious spasm. We aren’t really sure if Cole ever has that surgery to remove that bullet or if he just up and dies out in the desert one day.

The other issue I have with the movie is that at times (but not all) is that it feels like the old geezer parade takes on the ruthless bandits and saves the day. Let me explain, pilgrim before you pull out the shotguns and rhetoric about John Wayne being an American Legend. He is. I’m not disputing that. But take away the fact that he is John Wayne for 2 seconds. How convinced are you that an old gunslinger (the Duke was pushing 60 at this point), a young kid who can’t shoot a gun, a deputy who looks better suited fishing at the ole watering hole and a drunk sheriff can take on an entire band of ruthless varmints and actually win? If you answered very convinced, then I got a friend named Custer who has a proposition for you.

The film is presented in 1.85:1 Anamorphic Widescreen. This is the best the movie has ever looked. The picture is sharp and has been cleaned better than any print I’ve seen on cable or network television. There might be grain, but seriously what do you expect? Darks look as good as humanly possible and anything in normal lighting is excellent.

The audio is provided in Dolby Digital 1.0 English, Spanish and French Mono. As strong as the video is, the audio is mostly average and boring. Everything stays in the center channel but is very clear, just inspired. Action follows the same format and the highlights end up usually being somebody thrown into something or Mississippi’s giant boomstick making sweet music. Subtitles are also provided in English, Spanish and French.

The Centennial Collection marks its 9th release with a very good picture. It is an attractive dvd set with its own numbered slipcover and will fit nicely into any collection. The movie itself is as strong as almost any John Wayne western picture even if it is Rio Bravo recreated at many moments. The disc quality is where this film really shines however with amazing video, two informative commentaries and a second disc of featurettes on a multitude of subjects. If you are a western fan and are looking for a definitive copy of El Dorado, this is it. Regardless of Blu-Ray or any other disc format that comes out in the years ahead, you will be hard pressed to find a better transfer. Now excuse me while I take my copy of El Dorado and give it to the person who would appreciate it the most: my dad. Recommended. 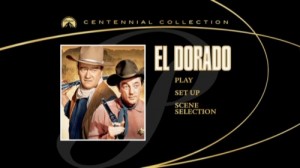 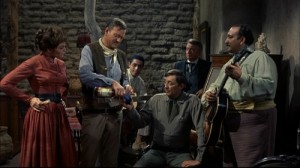 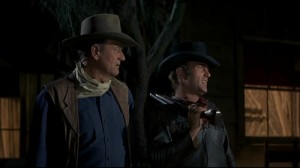 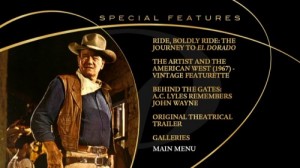 Michael Durr has been reviewing movies for the better part of fifteen years now. He primarily enjoys thrillers, sci-fi, animation and even a little courtroom drama. His favorite films include Escape from New York, the Goonies and anything with Alyssa Milano. When he’s not praising Kurt Russell as the greatest actor of our time or scratching his head over a David Lynch flick, he’s spending time at home in Texas with his lovely wife, Lori and his amazing son. How they put up with him is a mystery, but even Basil Rathbone doesn’t have the time to solve that one.
Upcomingdiscs Exclusive Kane Hodder Interview Teenage Mutant Ninja Turtles: Season 7