In my lifetime, I’ve really only liked five zombie movies. There is Shaun of the Dead, the three Resident Evil movies, and Zombieland. Most of the other zombie type films either belong in the “Way too Gory” or “Nonsense” designation. So, naturally when I receive a zombie movie like Dead Snow, there is some apprehension. However, in this case I can say that this movie belongs in both of those designations and delightfully so.

The movie opens with a lady (played by Ane Dahl Torp) and she is chased through the snowy mountains of Norway. The creatures ultimately corner her and eat her alive. We notice that the zombies have strange costumes as we fade to black. We re-open with seven medical students who are spending their vacation at a cabin up in what appears to be the same mountains.

They are missing one person, Sara who happens to be skiing through the mountains rather than taking the car trip with her seven friends. I wonder if we have already seen her. *thinks and pauses* And we are back. The seven teenagers are Martin (played by Vegar Hoel), his girlfriend Hanna (played by Charlotte Frogner), their friends Roy, Erlend, Liv & Chris (played by Stig Frode Henriksen, Jeppe Laursen, Evy Kasseth Rosten, & Jenny Skavlan respectively), and Sara’s boyfriend, Vegard (played by Lasse Valdal).

One night after some drunkenness and partying, there is a knock on the cabin door. The students open up the door to find an old hiker (played by Bjorn Sundquist) who asks to be let inside. They apprehensively do so and he sits down to a poorly made cup of coffee which he later trades in for a local beer. As he slowly rolls a cigarette, he starts to spin his tale.

He talks about the history of the area. It seems that during World War II, Nazis inhabited the region. They spent their time there like any evil cause would. They tortured and abused the local people. At the tail end of the war, the Nazis took all of the valuables and attempted to make their way out of town. The citizens had enough and tried to kill the whole lot of them. What was left of them including their leader Herzog (played by Orjan Gamst) was driven up into the mountains. The citizens assume they froze to death. However, evil still lurks in the area.

The wanderer finishes up his tale and tells the medical students goodbye before disappearing into the night. By the following morning, Sara is still nowhere to be found. Gee, you think something happened to her? Apparently, her boyfriend Vegard thinks so. He takes the snowmobile to go look for her. Meanwhile, the students find an old wooden box with valuables under the floor (it was next to the beer). They put it back, but apparently there are evil forces nearby who feel the disturbance. One can only wonder what sort of cruel fates await these crazy teenagers in the mountains of Norway.

It’s not really a spoiler or anything (because it’s so bloody obvious), but I’ll give the traditional spoiler warning:

They all die. Every last one of them meets their fate in a gruesome bloody display. And that Sara chick? Yeah, she died in the first two minutes of the movie if you didn’t figure it out. The hiker? Yeah he too died. In his tent. And you know who’s killing these teenagers and other random people in the area? Nazi zombies. And they wear WWII helmets and Nazi patches to make you know that they are indeed Nazis. They also like intestines. Yum yum eat them up intestines.

Anyway, this movie is not for the squeamish. There are guts, brains, torsos ripped off and a steady diet of intestines hanging out scattered throughout this entire movie. A guy cuts off part of his arm and almost his pelvic region if you are into that sort of thing. There is even toilet humor if you like that. If you love gore, heck this movie should probably get an Oscar in your eyes.

However, for me I can say I was thoroughly disgusted. At some points, I had to turn away and I’m usually okay with an acceptable amount of blood and body parts. To be honest, I still haven’t eaten any ground beef since. I like fish, lots and lots of fish. I will admit that the zombies look pretty original and particularly gruesome. But I simply can’t get behind this movie.

Maybe it’s the fact that it lives up to the stereotype of the students being dumber than a box of rocks. These guys are supposed to be medical students, and have about as much IQ as the zombies do. One of them is even afraid of blood, how messed up is that? By the way, I have to rant on one particular part, spoiler text again.

*spoiler ahead* (yes, this is the last one and no I don’t know where you can buy a snowmobile with a machine gun)

How stupid do you have to be to know how to create your own Molotov cocktail and then not be able to throw it two feet outside? The guy actually smashes it into the side of the house and burns it up. That’s brilliant. You know what, you deserve to die. Of course, I grew up as a pyro, but childhood hobbies aside, it isn’t that hard to launch a burning object out of a large window!

*end of spoiler* (and my patience.)

Anyway, this goes on and on. A ninety two minute relay of the epic battle between Nazi zombies and teenagers. One could probably see where this is going. Honestly, if it wasn’t for the hiker & Vegard, I wouldn’t have had a hard time finding talent in this film. Sure, it has a few memorable dismemberments. But that’s like saying that purple was a prominent inspiration in a certain Oprah Winfrey & Whoopie Goldberg film. Really? I didn’t notice.

The video is presented in 1.85:1 anamorphic widescreen. The video here is decent, there are some highlights with the death scenes being extremely gruesome in detail (it certainly turned my stomach). The outside scenes are also a treat due to use of Norway and their mountains for filming. The only issues were a few of the dark scenes where characters would almost disappear due to the absence of light.

The audio is presented in native Norwegian 5.1 & an English 2.0 dub. Honestly, I flipped back and forth between the audios because I was grossed out by some of the scenes (and I don’t understand Norwegian). The native 5.1 mix was excellent, dialog is very clear and we even get use of some surrounds to show off the effects of the weather and weaponry. The English dub is also completely serviceable, there is a drop in quality but if you don’t like reading subtitles, it’s the way to go. Subtitles are provided for English, English SDH & Spanish.

Honestly, there comes a time in every reviewer’s life where he can’t stand the film but he honestly sees the amazing work the director and the crew put into it. If there was ever a “how to” on making zombie movies, this is it and Tommy Wirkola should be your host de jour. A bunch of medical students go up to a cabin and run into some Nazi zombies and an epic battle ensues. Amazing, but not for me.

The gore is simply too much and even though I have a strong stomach (and fluffy too), I had a hard time digesting this film. Ha, intestine joke, get it? Yeah, there are lots and lots of intestines. Anyway, the dvd package should be a wonderful treat for any fan of this film. There is a large amount of behind the scenes footage equaling almost two hours housed in a double disc clear case (non-eco) package. Lots of people who love zombie movies will probably love this film. Just be sure if you aren’t used to this sort of thing to have the bucket ready, you’ll need it. 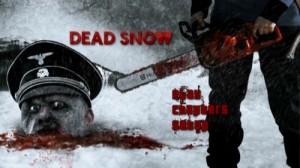 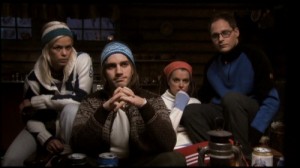 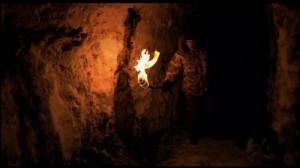 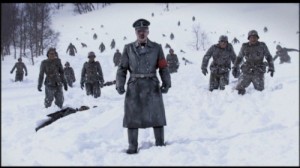 Michael Durr has been reviewing movies for the better part of fifteen years now. He primarily enjoys thrillers, sci-fi, animation and even a little courtroom drama. His favorite films include Escape from New York, the Goonies and anything with Alyssa Milano. When he’s not praising Kurt Russell as the greatest actor of our time or scratching his head over a David Lynch flick, he’s spending time at home in Texas with his lovely wife, Lori and his amazing son. How they put up with him is a mystery, but even Basil Rathbone doesn’t have the time to solve that one.
Walker Texas Ranger: The Seventh Season Clash of the Titans (Blu-ray)