Clash of the Titans (Blu-ray) 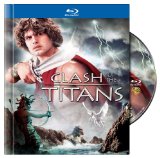 “Perseus and Andromeda will be happy together. Have fine sons… rule wisely… And to perpetuate the story of his courage, I command that from henceforth, he will be set among the stars and constellations. He, Perseus, the lovely Andromeda, the noble Pegasus, and even the vain Cassiopeia. Let the stars be named after then forever. As long as man shall walk the Earth and search the night sky in wonder, they will remember the courage of Perseus forever. Even if we, the gods, are abandoned or forgotten, the stars will never fade. Never. They will burn till the end of the time.”

Talk about your perfect storm. You take the master of stop motion technology, Ray Harryhausen, and you combine those creature animation talents with one of the oldest stories surviving today in Perseus and Andromeda. How can the combination not be magical? The story has always been a favorite of mine, likely because I was born on the Summer Solstice, the critical moment of this story. I was preordained to love this film. The truth is that this film never got quite the recognition it so richly deserved. Now, on the cusp of a computer generated remake, it was my unmitigated privilege and joy to watch the original 1981 film in the glory of high definition.

Regular readers here know that I have a huge amount of admiration and respect for Ray Harryhausen. Ten years ago it was my honor to befriend the man, and I’ve had great opportunities to sit with him and talk about his career. My interviews have been included in other reviews here and might be worth a second look. Years ago we were invited to attend his Walk of Fame induction, but resources made it impossible to attend. These days Ray lives still in England with his lovely wife, and it has been a while since we spoke. It is my hope to do a podcast with him in the future, so stayed tuned.

The gods on Mount Olympus are a petty and jealous lot. They use men in games of spite and power. Perseus (Hamlin) is the son of Zeus (Olivier). He was cast out on the sea with his mother as a baby. Now that he has come of age the gods have determined that he must seek and fulfill his destiny as a hero. He falls in love with the cursed Andromeda (Bowker) who is destined to marry only a suitor who can answer an ever changing riddle presented by her now deformed past fiancée Calibos. With the help of charmed weapons, Perseus triumphs and wins the hand of his beloved, only to face losing her when Andromeda’s mother Cassiopeia (Phillips) dares to compare her daughter’s beauty with that of Thetus (Smith) in her own temple, no less. The penalty is that Andromeda must be sacrificed to the destructive titan Kraken on the eve of the Summer Solstice, or the entire city will be destroyed. All appears lost, unless Perseus can find a way to stop the creature.

The film stays pretty close to the original myth. The Kraken is actually not the offending creature of Greek lore, but makes a fine Harryhausen creature nonetheless. The story also includes one of the Greek poets Ammon (Meredith) who gave us much of this material in life. The point where the film suffers is the addition of a mechanical owl named Bubo. Bubo was not part of the original story and is added here to appeal to the younger audience members. The thing makes sounds very suspiciously like that of Star Wars bot R2D2. Take away much of that “cute” factor and the film would be even better. All of the action takes place in some breathtaking locations mostly in Spain and Italy. The cliffs and shores are quite marvelous and only add to the epic nature of the tale. The scale here is very large, larger than in any of Harryhausen’s previous films.

Clash Of The Titans was a milestone film for both Ray and his long time production partner Charles H. Schneer. For both men this would be their final film. Schneer died just a couple of months ago here in Florida, and Ray has since retired. The film incorporated their own brand of stop motion. The process was used to bring many of the famous Greek creatures of mythology to life for this wildly fantastic film. There were as many of these creatures and effects as in any of his previous works. Through Harryhausen’s distinct process we get to marvel at the likes of Medusa, Pegasus, Calibos, giant scorpions, and, of course, the giant Kraken.

This was not a “great” film. I freely acknowledge as much. The f/x now in high definition show their flaws as they never had before. The story is a bit wooden and oversimplified, but it is still the standard “hero’s journey”. The acting is quite mixed. LA Law’s Harry Hamlin is not the heroic type, I’ll agree. He does a fair enough job of striking poses, but he’s given some rather stuffy dialog to deliver. It doesn’t help that his co-lead Judi Bowker is neither gorgeous nor much of an actress. It’s a bit hard to imagine such ordeals for this woman. But there are some impressive cast members here. Burgess Meredith as Ammon is warm and delightful. The gods are represented by an impressive European cast of Laurence Olivier, Maggie Smith, and Ursula Andress. There is a definite majesty in the Olympian cast. The creatures themselves are the stars here, and it is them that most of us originally flocked here to see.

Clash Of The Titans is presented in its original aspect ratio of 1.85:1. The 1080p image is arrived at with VC-1 codec at an average 30 mbps. This is a very mixed image presentation. There are moments when this film is simply stunning. During those times sharpness is razor and detail is amazing. In one scene you can see the beads of sweat on Hamlin’s arms as if he were standing right there. Still, there are moments when the image is so crowded by grain and image noise that you almost can’t decipher what is on the screen. Another problem is that the extra sharpness and resolution detail makes the f/x flaws so much more obvious than they ever appeared before. I’ve had this film on DVD and laser disc, and this is hands down the best image possible without a full restoration and tweak of the f/x. I don’t think we’re likely to get that.

The DTS-HD Master 5.1 audio doesn’t really shine at all here. The sound is often quite harsh and lacks anything dynamic at all. You can hear dialog and score well enough, but it doesn’t have any body to it. Someone did a bad job on the eq here, and the result is quite annoying.

This release comes in a very attractive book/case combo with 20 pages of full color photos and info from the film. There is also another booklet that covers the new film. It’s a very sweet collector package.

Myths And Monsters: You can select from several of the creatures in the film and learn something about their creation.

A Conversation With Ray Harryhausen: (12:12) You’ve seen this several times now on these releases. It’s still nice to watch Ray talk about how he got started and his inspirations.

We can’t ignore the fact that this film is finding its way to Blu-ray mostly because of the forthcoming remake. From what I’ve seen in trailers and an included sneak peek here, the new film does attempt to pay homage to the original. It appears that Bubo is gone. No real loss there. Of course, the stop motion process has been replaced by CGI technology. I’m not really upset that the advanced remake is arriving. I’m actually looking forward to seeing it with the free ticket provided in this release. I hope that it only increases appreciation for the original. Only Tim Burton and a very small group of artists continue to embrace the stop motion craft. As much as I love CGI, it is my hope that there will be room for both art forms for generations to come. We didn’t abandon the art of painting portraits when photography came along. Why should we abandon this quite extraordinary craft just because we don’t “need” it? There is no doubt that this film appealed to my younger imagination. ” I was partial to tragedy in my youth. That was before experience taught me that life was tragical enough without my having to write about it.”

Gino Sassani is a member of the Southeastern Film Critic's Association (SEFCA). He is a film and television critic based in Tampa, Florida. He's also the Senior Editor here at Upcomingdiscs. Gino started reviewing films in the early 1990's as a segment of his local television show Focus. He's an award-winning recording artist for Omega Records. Gino is currently working on his 8th album Merchants & Mercenaries. Gino took over Upcomingdiscs Dec 1, 2008. He works out of a home theater he calls The Reel World. Favorite films: The Godfather, The Godfather Part II, The Body Snatcher (Val Lewton film with Karloff and Lugosi, not the pod people film), Unforgiven, Gladiator, The Lion King, Jaws, Son Of Frankenstein, The Good, The Bad And The Ugly, and Monsters, Inc.
Dead Snow Designing Women Season 3