Back in the day, I had a passion for side-scrolling beat em ups. Whether I was fighting with my bare knuckles, super powers or sword and sorcery, I liked them all. There were so many good ones: Double Dragon, X-Men Arcade, Knights of the Round and more. Apparently Capcom wants me to channel my gaming self from the early nineties and bring me two awesome games of the genre: Final Fight and Magic Sword, better known as Final Fight: Double Impact.

True to the Xbox Live Arcade format, there are actually a lot of options here for the graphics. You can choose to have the game in classic mode harking back to when these games were in the arcade. Capcom goes one step farther with this and includes the look and feel of an actual arcade curved CRT monitor. This is retro style at its absolute best. More arcade titles should employ this method of preserving old school graphics.

However, if full HD is more your thing then Capcom also serves you just as adequately. You can sharper up the graphics plus extend it to fit your widescreen display. The color is awesome and for the purposes of reviewing, I found it easier to check out and look for any issues. Of course, there are still plenty of occasions where enemies are off-screen but that was the game design, not the graphics.

The sound is presented in Xbox Live’s usual 5.1 Dolby Digital format. Final Fight and Magic Sword in their original arcade format. It was considered cutting edge for its time but the technology behind it has been upgraded with a remixed soundtrack as another option. Amazingly, it still sounds the same just better. The music holds up greatly and the sound effects even though they are distinctly from that era will radiate well throughout your speakers.

Metro City is ready for a beatdown. It seems that Mike Haggar has been elected mayor by his fair people. Now, Haggar has promised the electors that he will handle the city’s criminal problem as part of his campaign. However, the Mad Gear gang has other ideas. They kidnap Haggar’s daughter Jessica and hope that Haggar will allow crime in the streets in order to get her back.

They don’t know Haggar, he backs down from no one. He enlists the help of Jessica’s boyfriend, Cody who is a master of the marital arts. Cody also gets help from his sparring partner, Ninjutsu master: Guy. The three of them then take to the streets to get back Jessica and defeat the evil Mad Gear Gang.

As mentioned, this is a bare knuckle beat em up. You simply move from the left to the right beating up bad guys as you go. Guy is the quickest but has some really terrible throws. Haggar has some awesome throws (the leaping piledriver is a thing of beauty) but he’s a lot slower. Cody, well he’s mister all-around as he has decent throws and moves around the screen adequately.

Enemies range from your common thugs to knife specialists to acrobatic women (who can forget Poison?) to big brutes that would cause the screen to shake when they came down. The bosses were another great example of diversity as they would feature even bigger brutes to a Samurai Warrior to one of the most annoying bosses on record that would literally chuck a dozen grenades at your feet.

Powerups were also plentiful as you had weapons such as pipes and knives. There was food to pick up to restore health and jewelry for additional points. There were six stages along with two bonus levels, one that involved destroying a car and another breaking a lot of glass. The game was simple and the levels were straight forward even if the difficulty didn’t always cooperate.

Magic Sword on the other hand was a little different. It took place in a distant world, one that is in the evil hands of a dark lord named Drokmar. He has control over a crystal that is known as the Black Orb. But Drokmar lives in a tower known as the Dragon Keep and you must visit there to defeat him. You are known as the Brave One, a no-nonsense barbarian with a sword who must conquer 50 levels of monsters, traps and bosses that will do their best to keep you from the Black Orb.

Again, side scrolling fighting was the central theme except that you did it with a sword and shield. Enemies ranged from scary creepy creatures to wizards and dragons. There were upgrades to swords and shields as well as magic. But the most obvious thing added here were the keys. The keys were picked up from treasure chests and enemies and depending on which one you picked up you could open a multitude of doors.

Sometimes the keys would open a door with more enemies or let you proceed to the next level. But more importantly a key could free an ally with special powers. There were eight different allies who would join in the fight and aid your quest. There were spellcasters and spearchunkers and if you were really lucky (and had a diamond ring) you could lure the Lizardman to fight with you.

The difficulty in these games was really about the same because they were basically cut by the same arcade cloth. They weren’t afraid to throw half a dozen enemies at once from both sides in an attempt to drain your last quarter. The idea was to keep you playing and Capcom did the right thing here by including unlimited continues. Yes, you can defeat either game in a sitting but the real skill is to limit your continues and play proficiently.

This double package of arcade hits is presented in a dual arcade cabinet setup. It defaults to Final Fight but a simple switch will enable you to play Magic Sword. One can play the regular arcade game but also could select a custom setup for a specific level to go through again and again. Naturally, there are also multiplayer options which allow a local player or one from Xbox Live to jump in at any time to give help.

However, the most replay bang for your buck comes from the Vault. The Vault is a list of tasks (separate from achievements) that you must complete. These range from completing a level to scoring a certain number of points and other tasks of varying difficulty. Completing these tasks will give you access to classic sketches, character art and even cartoon episodes. They will also net you the hardest achievement.

There are twelve achievements in all totaling the usual 200 points. There are game specific achievements in both titles and most can be considered not too difficult. Some of the more difficult ones include the already mentioned vault achievement as well as completing either game in eighteen continues or less. This sounds easy, but considering that this is true to the arcade, it is a much more difficult task than expected.

Playing these two games certainly brought back a lot of good memories. Excellent memories, actually. When I purchased it a month after the release, I didn’t even expect to write a review of the game. But after I played through Final Fight three times and Magic Sword twice, I knew I had to share it with the Upcomingdiscs community. The game has excellent graphics, particularly to those craving an authentic arcade setup. Sound still holds up and there is a ton of replay value contained in this package.

I do want to alert you one of one tiny flaw in the game. If you want to save your game or you are in fear of your batteries going out on you, do yourself a favor and switch online mode to off. You can still save in online mode, however the game keeps going in order to facilitate the Live feed. Furthermore, if you lose the juice on your controller, you will need to grab some replacements in a hurry and put them back in before you are killed and the continue counter goes to zero.

That aside, this really is a fantastic package. I give it a very solid recommendation and think that anybody who appreciates the classics will appreciate this one. 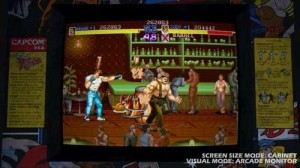 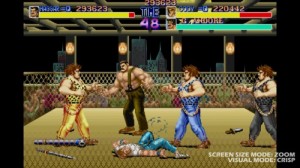 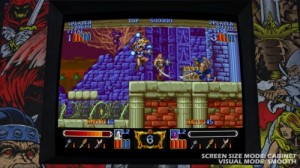 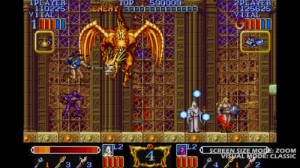 Michael Durr has been reviewing movies for the better part of fifteen years now. He primarily enjoys thrillers, sci-fi, animation and even a little courtroom drama. His favorite films include Escape from New York, the Goonies and anything with Alyssa Milano. When he’s not praising Kurt Russell as the greatest actor of our time or scratching his head over a David Lynch flick, he’s spending time at home in Texas with his lovely wife, Lori and his amazing son. How they put up with him is a mystery, but even Basil Rathbone doesn’t have the time to solve that one.
Play the Game Contest: Dirty Dancing Limited Keepsake Edition On DVD Giveaway