Courage the Cowardly Dog: Season One

The Cartoon Network Hall of Fame seems to be expanding. Some of you might remember my review of Johnny Bravo Season One which was one of the first titles under this distinction. Courage the Cowardly Dog seems to be the most recent entry in this series and we can only hope that it is as good as ole JB, the king of people who sound like Elvis and excessive machoism.

Courage is a very special dog. He was abandoned as a puppy after his parents were sent into outer space. He was later found by Muriel Bagge, an elderly woman and taken into her home in Nowhere, Kansas. Courage’s personality is totally unlike his namesake. He is unfortunately a coward in every sense of the word. However, this lack of “courage” is what probably keeps him alive.

See the Bagges, Muriel and Eustace routinely find themselves in all sorts of trouble, but they just don’t know it yet. These aren’t just normal retired country folk problems either like fixing your tractor tire or wondering which end to milk a cow from. These involve all sorts of scary creatures and dastardly villains like Bigfoot or Le Quack, the famous con artist who is also a duck.

Courage does have some things to aid him in saving and alerting the Bagges. He can speak perfect English (this was later dropped after a while) and he can transform into the creature he’s come into contact with for a split second to alert his owners. He can even use the computer upstairs to seek out important information despite the fact that the computer is more willing to insult him than actually help Courage out.

A good example of a typical episode can be found in the very first toon, A Night at the Katz Motel. It starts out rather innocently with Courage and his owners trying to find a hotel room to spend the night. They come upon the Katz Motel but a room comes at a price, Courage has to stay outside and the owner, a crazy red cat named Katz wants them to be spider food. Courage spends the next ten minutes escaping from spiders and trying to defeat Katz at his own game, racquetball.

One of the things that attracted me to the series from the very beginning was the use of horror elements in what was essentially a kid’s cartoon show. As mentioned in A Night at the Katz Motel, the evil creatures were a bunch of hideous spiders who wanted to eat the Bagges. They didn’t exactly run around saying “Boo” or quoting Shakespeare, these suckers were scary.

But at the same time, the horror factor was offset by humor. Courage, in spite of himself is most entertaining when he is running from beasts or being intimidated by his owner, Eustace. We are also interested in how exactly Courage pulls off rescuing his owners or himself every episode. It always seems that at the very last minute he is able to thwart the evil forces.

The video is the standard 1.33:1 Fullscreen presentation. The first season is just over ten years old and still looks excellent. Since there are a wide variety of creepy crawlies and things that go bump in the night, one would expect this series to have a wide variety of horrific colors. The color palette is very deep and detailed and has been preserved with absolute care. It’s one of those cartoons that you wish was still around so you could see how modern technology would take it on.

The sound is presented in English Dolby Digital 2.0 Stereo Sound. Since the horror element is so strong, it is only natural to see that the sound channels for Courage are equally active. Dialog is strong (even though it is often used in small doses for adding humor to the situation) and the effects are very good without going overblown. Subtitles are included for English.

For those who are interested, this comes in a lovely piece of trash known as the Eco-Box. This version does have the normal tray insert for the second disc, so you can grab a replacement case that has the notches for the 2nd disc and stick it in. Please stop using these WB, there are green solutions out there that do not use this silly hole technology.

Courage the Cowardly Dog would go on to last four seasons and fifty two episodes. It was consistently a show with an equal part horror and equal part humor to round out a wonderful twenty two minutes. It certainly deserves to be in the Cartoon Network’s Hall of Fame. It is just a shame that the quality presentation Warner Bros showed us in Johnny Bravo is nowhere to be found in Courage Season One.

The video and audio are certainly adequate. But this dvd set completely lacks in extras. We get a trailer for Johnny Bravo and that’s it. There are no commentaries, no behind the scenes featurettes, not even a lousy pencil test. And where the heck is the pilot? Did we forget that this sucker was nominated for a *beeping* Oscar? Something fishy is going on or my name is Kenny Butterbean and it’s not. Recommend for the show certainly, but they really need to work on the extras. 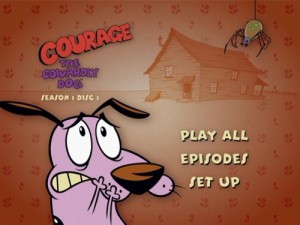 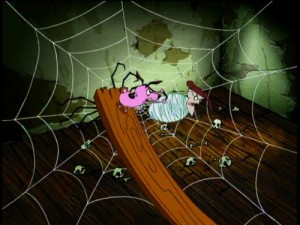 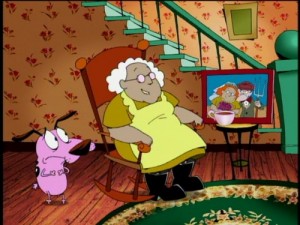 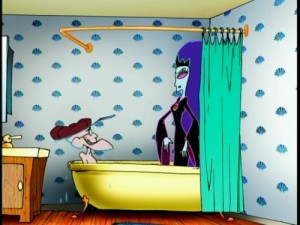 Disc 1
A Night at the Katz Motel/Cajun Granny Stew
The Shadow of Courage / Dr. Le Quack
Courage Meets Bigfoot / Hothead
The Demon in the Mattress / Freaky Fred
Night of the Weremole / Mother’s Day
The Duck Brothers / Shirley the Medium
King Ramses’ Curse / The Clutching Foot
The Hunchback of Nowhere / The Gods Must be Goosey

Disc 2
Queen of the Black Puddle / Everyone Wants to Direct
The Snowman Cometh / The Precious, Wonderful, Adorable, Lovable Duckling
Heads of Beef / Klub Katz
The Revenge of the Chicken from Outer Space / Journey to the Center of Nowhere
Little Muriel / The Great Fusilli

Michael Durr has been reviewing movies for the better part of fifteen years now. He primarily enjoys thrillers, sci-fi, animation and even a little courtroom drama. His favorite films include Escape from New York, the Goonies and anything with Alyssa Milano. When he’s not praising Kurt Russell as the greatest actor of our time or scratching his head over a David Lynch flick, he’s spending time at home in Texas with his lovely wife, Lori and his amazing son. How they put up with him is a mystery, but even Basil Rathbone doesn’t have the time to solve that one.
Cinema Pride Collection The Wronged Man