The Civil War, A Film by Ken Burns

Posted in: Disc Reviews by Michael Durr on April 4th, 2011 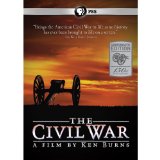 I have been reviewing various discs for plenty of years now. As a rule, I’ve stayed away from most documentaries as I know that unless they involve video games, I will probably use them for a sleep aid. That is not to say I can’t enjoy them, I just know my track record. Then, I received the grand mother of all documentaries, The Civil War by Ken Burns with an anniversary edition to boot. Yep, this is going to be a long and bumpy ride, let’s hold on shall we?

“To understand our history is to understand the Civil War”, Shelby Foote (Writer and Historian).

(I tried to write this as a sampling of each disc to see what kind of topics appear for each year. This is by no means a complete listing as I do not wish to rewrite a history book ?)

Disc One
The years are 1860-61. One of every seven Americans belonged to another American. This was also known as the height of slavery. The slaves were badly beaten and had terrible living conditions. Only four of a hundred slaves ever made it to the age of 60 and almost all of them were bought and sold like livestock. Even when slaves would get married (which was not recognized as a legal union), the minister would proclaim “Until death or distance do us part”.

Even when Eli Whitney invented the cotton gin and made the business of picking cotton easier, the demand for slaves increased. It was growing to conditions where a conflict was inevitable. Controversial books such as Uncle Tom’s Cabin (which sold 1.5 million copies) brought awareness to the situation and furthered the dissension between the southern and northern states. States wanted to succeed from the union like South Carolina, but “they were too small for a republic and too large for an insane asylum.”

Disc Two
Enter 1862. We have the first income tax instituted in the United States in order to fund the war. The Gatling Gun is invented and the topic of the day is who is going to control the Mississippi River and is England going side with the North or South or play the neutrality card. In the war coming, middle towns such as Winchester, Virginia would change leadership up to seventy two times. Jefferson Davis would be elected the president of the confederacy with generals Robert E. Lee and Stonewall Jackson to serve as leaders of the confederate army.

The North was already having problems of their own. President Abraham Lincoln was preparing the Emancipation Proclamation which would effectively free all slaves. However, there are issues from within. General George McClellan was the leading officer of the army and wanted nothing better than to sit and refrain from fighting. He secretly wanted to be the leader of the free world and thought nothing better of the president than a trained baboon.

Warships were being used in this war and startling new technology for the time period was being developed. Ships like the Monitor which had forty seven patentable inventions would change the face of war and help turn the tide. Ulysses S. Grant who was a clerk was turned into a hero by war’s end by leading the Union Army while McClellan was back in Washington explaining his current state of matters. The war was going to be brutal and many deaths would follow by gunfire and disease.

Disc Three
We shift forward in the war to 1863. Stonewall Jackson is becoming a terror the Union Army. The brutality of the conflict between the North and the South showed in every soldier’s face. Desertions were rampant and for those who remained, they were malnourished and disease was prevalent. While food sat at storehouses that could not make it to the troops, soldiers were forced to live off coffee and other sources of food that festered with worms.

African Americans were being used for armies for the first time. However, even the North was not in heavy favor of Emancipation Proclamation, and these platoons were limited to only Blacks. Battles at Fredericksburg would lead to bloody massacres of the North soldiers but they would give up hope. This is where the infamous Battle of Gettysburg would take place and turn the war in an amazing show of courage. Perhaps the most famous speech in American history, the Gettysburg Address would show that freedom can indeed ring.

Disc Four
In 1864, there is still fighting all across the country. From Texas to Mississippi, the North is losing control of the War. Lincoln was on the verge of a public election where he would have to face his biggest opposition, the former General, George McClellan in a popular vote. War has been terrible to the president and most felt that the war would carry on forever.

The year was also witness to the rise of Nathan Bedford Forest, an important leader in the South. He rose from Private to Lieutenant General and faced off with the Union General William Sherman. Spies were rampant and the most unlikely of aides were in the form of women and slaves who would strike out against the Confederacy. The North was trying to make a comeback but the question remained whether if it was too little too late to stem the South from victory and independence.

Disc Five
As the war starts to close in 1865, southern cities start to fall under the Union’s feet. General Sherman’s March to the Sea took Georgia and the Carolinas while Grant took out areas of his own. But then came the amazing and dramatic surrender from Robert E. Lee at the Appomattox Court House to Ulysses S. Grant to signify the end of the war. However, just because the war ended did not mean that it was over for everybody associated with it.

Real struggles were still to come. In the wake of the Civil War’s aftermath, people such as John Wilkes Booth were not happy with the outcome. He hatched a plan to not only kill the president but many other key figures from the vice president right down to the secretary of war were to fall. Unfortunately, his plan would succeed on some level as Lincoln was shot and killed (at Booth’s own hand) but also Secretary of War Seward got stabbed at hands of a co-conspirator.

Nobody really won the Civil War but plenty of people certainly lost their lives and there was much bloodshed. One of the interesting things about the war was that many people wanted to forget what happened which led to tons of photographs to be destroyed. The glass from the cameras were converted to be used for greenhouse glass and in some cases you could walk into that place and see old Civil War pictures still embedded in the glass frame.

This documentary can be described as a series of classic photographs from the time period mixed in with interviews and archival footage (from later periods naturally) to create a narrative story of what went on in the country from late 1860 to the year of 1865. No subject is too minor to be expressed and no person too small to make a monumental impact on the proceedings.

I think that’s the thing I liked most about the documentary. They can easily focus on the Lincolns, Grants, Lees and Jefferson Davis of the Civil War. But they also focus on the smaller people and influences who in the grand scheme of things are just as important as the great leaders of the war. Regardless of whether it was women, children (children were in the army as soon as 9 years old), or African Americans, each subject was done with care and equally represented.

To find a criticism in the content is mostly futile. The only negative thing you can really take away from the documentary is how well this documentary can really capture the casual viewer’s attention and keep it there for the marathon of viewing. It is not to say that this is boring but as Americans (arguably the main viewing audience) we don’t always have the longest attention span.

The video is in 1.33:1 fullscreen presentation. Since most of the footage contained here is in the form of old photographs and archival footage, we shouldn’t really expect too much in the form of quality. However, there does appear to be some work in the restoration department to bring these classic photographs to a quality they have not enjoyed since taken one hundred and fifty years ago. It is certainly acceptable for what it is and should not detain you from your viewing pleasure.

For the audio portion, we get a 5.1 English Dolby Digital track (2.0 Stereo track also included). The dialogue is beautifully clear and if the classic photographs are not your thing, you can easily close your eyes and listen to the audio with no loss of content. None of the speakers are hard to listen to, it is an enjoyable audio presentation. The only negative would be when they try to put some audio cues on the background noise like a gunshot or the beating of a drum where it is less than perfect on purpose. Subtitles are included for English SDH.

As wonderful as the content is, I honestly can not say the same with the video and audio presentation which is average at best. The extras are mostly confusing (with the exception of the Shelby Foote footage) and do next to nothing to enhance the product. The box was also supposed to come with a 16 page full color booklet with a selection of photos and battle details.

It was unfortunately missing from my set. I do recommend this set, but on the premise that if you can find any copy of the Ken Burns documentary (not just this edition) and you are interested in the Civil War at all, you owe yourself this great documentary. Enjoy, and if you aren’t into the Civil War, then find a loved one to get this set for. They will thank you.

Michael Durr has been reviewing movies for the better part of fifteen years now. He primarily enjoys thrillers, sci-fi, animation and even a little courtroom drama. His favorite films include Escape from New York, the Goonies and anything with Alyssa Milano. When he’s not praising Kurt Russell as the greatest actor of our time or scratching his head over a David Lynch flick, he’s spending time at home in Texas with his lovely wife, Lori and his amazing son. How they put up with him is a mystery, but even Basil Rathbone doesn’t have the time to solve that one.
Our Planet: The Past, Present and Future of Earth The Perfume of the Lady in Black