Posted in: Disc Reviews by William O'Donnell on February 3rd, 2012 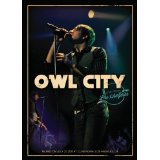 Owl City’s popularity was born out of social networking websites such as Myspace. From the days of uploading songs while living in his parent’s basement, to going #1 on Charts in an astounding 24 countries, Owl City (aka Adam Young) continues to ride his hysterical success into his inevitable, first concert film.

Young and his band of pretty 20-somethings don’t seem to break a sweat while delivering a suspiciously polished sounding hour-and-a-half long performance. I say suspicious because, although the camera shows that everyone is playing these songs accurately (not that they’re all that challenging mind you), it just sounds a lot like the studio versions. I’d start making accusations of playing partly to tapes or adding tracks in post-production because the guitar sounds a little too clean, some instruments and voices are mixed in and out mysteriously…but Young is such a polite young man in his in-between song banter that I shall not go into it any further. You’re welcome Mr. Young.

Owl City’s music is a blend of alternative rock and electronica that could easily be described simply as “pop,” for the sake of saving breath. Young’s voice must sing at a frequency that only resonates in the hearts of teenage girls because it doesn’t do anything for me except make my hand reach for the chapter skip button. Young is backed by a cellist, a violinist, two percussionists and a keyboard player. The percussionists exude a lot of energy at their instruments while the rest of the band do their best to look happy and pretty as they remain static.

Even though Young is only a year younger than me, I am feeling old watching this concert. I suppose it just boils down that ‘I don’t get it, but the kids seem to like it’ syndrome. This music is not alien to me…I just can’t get on board with even humming the tunes. Perhaps I shouldn’t have watched this just after listening to Leonard Cohen’s latest album. That contrast is like night and day. Owl City is not the most aggravating of pop artists, but he still makes the Archies look like Cannibal Corpse at times.

1080i HD Widescreen 1.78:1. I mentioned before how this band didn’t look like it was sweating? I’m serious! This may have been the cleanest looking band I have ever seen at the end of a show. It might as well have been a sunday Church country gospel roundup (and even then, only a 10 minute set). The clarity of the HD picture helped verify all of this. Shots of the crowd are the only points where some haze appear in the darker shades.

DTS HD Master Audio, Dolby Digital 5.1 and LPCM Stereo are all available. Concerts HAVE to deliver in Audio above all else. That should go without saying yet I repeat something like it in every music related review I do on this site. Now, I did not repeat m,yself because I have a gripe with this film’s sound quality. No, this Blu Ray delivers well in this category.

Interview: There is an extended option that offers a montage of the stage being set and sound checked before any interview starts. The interview itself starts with Young giving a brief history lesson on himself, and ends with fans asking innocent questions about snack food and such. Fans will doubtlessly find him adorable.

This is not the most dynamic show. The lighting set up is nice but you aren’t going to get any bonus thrills unless you are a die hard fan of the music going into this film.

I’m glad this Minnesota lad got to be a superstar because of his hit single “Fireflies,” but I’m not sure how much longevity he may have. I assume he’ll find his band of loyal fans and do well in mid-level venues for a little bit yet. If you think more will come of this young musician, this Blu Ray is for you.

The Woman in Black The Double