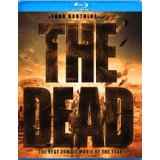 Despite their pop culture ubiquity these days, zombies are getting somewhat of a raw deal. To be clear, I’m talking about the old-school, George Romero-style creatures that slowly lumbered toward their victims and whose only ambition in life was to snack on human flesh. Nowadays, a lot of filmmakers seem to be more interested in making zombie movies that don’t technically have “zombies” in them (“infected” is a popular alternative term) and who are almost fast enough to earn a spot on their country’s track and field squad for this summer’s Olympic games. Even The Walking Dead — fresh off setting a new ratings record for basic cable viewership earlier this week — has conspicuously avoided having any of its characters refer to the living dead as “zombies” over its two seasons. (Instead, they’re “walkers” or, most recently, “lame-brains.”)

The Dead strives to be a return to Romero-esque horror. Billing itself as “the first zombie road movie set against the spectacular scenery of Africa,” the film follows American Air Force Engineer Brian Murphy (Rob Freeman), who survives a plane crash in war-torn, zombie-infested West Africa only to find himself in a brutal, unforgiving landscape that is completely barren…except for the undead shuffling in his direction. Murphy eventually crosses path with Sgt. Daniel Dembele (Prince David Osei, a poor man’s Djimon Hounsou), whose village has been ravaged by the reanimated dead and who is determined to find his missing son.

Co-directors/co-writers Howard and Jon Ford — collectively known as the Ford Brothers — get their movie off to a very promising start with an arresting opening sequence that fantastically establishes both the movie’s unusual setting and the type of zombies we were going to be dealing with when our hero calmly sidesteps his first attacker. The brothers also end their movie with an ambiguous, but admirably downbeat final shot.

Unfortunately, most of the stuff in between ranges from dull and repetitive to flat-out atrocious.

Let’s get the atrociousness out of the way first. Simply put, Freeman gives one of the worst (non-porn) lead performances I’ve seen in a long time. This is even more impressive when you consider he speaks even less than Ryan Gosling in Drive. Look, I understand this genre isn’t exactly known for cranking out great performances — Romero, in fact, certainly wasn’t shy about working with non-professional actors — and I can also admire the notion that not every survivor of a zombie apocalypse is going to be quippy action hero who always knows what to do.

The problem is that, apart from his piercing grayish eyes, Freeman’s average-ness — his name is Brian Murphy, for cripes sake! — isn’t nearly compelling enough to hold our attention. This is a major flaw because the character doesn’t say more than five words in the movie’s first 30 minutes, most of which are spent watching Murphy try to make his way to an airfield. This would be acceptable if The Dead had anything else going on — maybe the social commentary or satire of the earlier movies it emulates — beyond gorgeous shots of the African terrain and admirable production design.

Eventually Murphy meets up with Dembele, and I realized that I liked Freeman better as an actor when he wasn’t talking. (His line readings were downright painful.) Freeman is so bad that I honestly can’t tell if Osei was actually good or if he only looked good next to such a poor performer. I’m leaning toward the former because Dembele had a nice presence, even when he wasn’t talking, while Freeman has, what I like to call, “screen absence.”

Still, you’re not here to see Freeman and Osei (unless you’re related to them): you’re here for some zombie action! The Dead mostly delivers on that front, featuring some pretty impressive makeup effects, and making the creatures a constant threat in the background while not over-using them. Unfortunately, some of the “slow zombie” action becomes repetitive pretty quickly. I mean, there are only so many things you can show Murphy struggling to do — break a lock, put gas in a truck, get the same truck unstuck from some rocks — before he succeeds at the very moment before the zombies reach him. Also, even though I admire the movie’s final shot, the ending sequence leading up to that shot felt incredibly rushed.

The Dead is presented in its original aspect ratio of 1.78:1. The 1080p image is arrived at with an AVC MPEG-4 codec at an average of 21 mbps. The best thing about the movie (and about this Blu-ray) is how vivid the African landscape looks in the bright, burning sun. Unfortunately, the image became noticeably grainier during nighttime scenes. The splattered brains of countless zombies also came through in a very satisfactory way in this video transfer.

The Dolby TrueHD 5.1 track is serviceable and does a very solid job of pumping out the movie’s repetitive score. (Which sounds like music Survivor threw away.) More care was taken on the splat and boom of the various zombie kills than on the sound of the dialogue (which is actually a good choice). Unfortunately, for a movie where danger constantly lurks just off screen, the audio track isn’t nearly dynamic enough.

Audio Commentary with the Ford Brothers: Even if you’re watching The Dead for the first time, I recommend doing so while listening to the U.K. filmmaking duo discuss their movie. Trust me, you’re not missing any great dialogue, and the brothers have interesting and humorous stories about the perils of filming in West Africa, working with real-life amputees and African villagers-turned-zombies, and poking fun at their own cameos. The good (and bad news) is that this commentary is better than the movie.

Unearthing The Dead: Behind the Scenes (5:12) Not your conventional behind-the-scenes doc. This is an odd collection of random footage featuring the cast and crew filming scenes on location, while we see the finished product in a smaller inset. The filmmakers only speak twice, and only for a few seconds. I hope you like the movie’s score, because the rest of the time we’re listening to the sweet sounds of the movie’s theme.  This actually made me yearn for a standard “Making of” documentary.

Deleted Scene: (1:41) You read that correctly: “deleted scene,” meaning singular. The brief, disposable moment has Murphy meeting a female doctor in a small village that had previously repelled a zombie attack. The two briefly speculate about the origins of the zombie plague, but we don’t get any concrete answers because the hows and whys don’t really matter in this kind of movie.

To be fair, no on-screen character refers to the creatures as “zombies” in this movie either. Still, The Dead is a clear stab at bringing back old-school horror, and I admire the filmmakers’ efforts to accomplish that in a fresh way by setting their movie in Africa. (The Ford Brothers drop Romero’s name within the first two minutes of their commentary.)

However, people hankering for the “Return of Slow Zombies” — as well as the heavy emphasis on atmosphere, and the gradual build-up of tension that term implies — deserve better than this movie.