The Son of No One (Blu-ray) 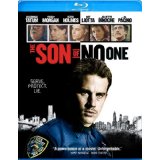 After watching The Son of No One, I’m afraid I have some good news and (significantly more) bad news. The good news is that I get to say the following sentence for the first time in at least ten years: Al Pacino was probably the best thing in this movie. The bad news is Pacino has only a relatively tiny role in this dramatically stagnant crime drama that ends up squandering a talented cast, a vividly-realized setting and some interesting ideas.

Channing Tatum stars as Jonathan White, a young cop who has been transferred to the 118th Precinct in Queens where his late father was a cop and located in the same district where White grew up. The precinct’s captain (Ray Liotta) is troubled by some anonymous letters published in a small local newspaper by a persistent reporter (a miscast Juliette Binoche). The letters claim the police covered up two murders 16 years ago in the same neglected housing project where White grew up.

Set in 2002, the movie appears ready to explore the intriguing question of what happens when the heroic afterglow rightfully bestowed on law enforcement officials after 9/11 starts to fade, and things gradually return to the way they were prior to that catastrophe. Unfortunately, writer-director Dito Montiel doesn’t dive deeply enough into that notion. Instead, he repeatedly shoots his own movie in the foot with wonky pacing and, more importantly, completely illogical characters and motivations.

The movie shuffles back and forth between White’s traumatic childhood — which included a troubled best friend named Vinny and a sympathetic detective (Pacino) — and the present, where those anonymous letters put a growing strain on White’s personal (his wife is played by Katie Holmes) and professional lives. Tatum actually has some nice, understated moments — despite the fact that he’s sporting a truly unfortunate mustache that makes him look almost as ridiculous as Rob Lowe in the Lifetime movie Drew Peterson: Untouchable (Google it!). Too bad the flow of the present-day scenes is constantly interrupted by flashbacks that are far more interesting. (Young actors Jake Cherry and Brian Gilbert are very impressive as Young Jonathan and Vinny, and Cherry really holds his own in a pair of strong scenes with Pacino.)

As a result, it’s almost impossible to get invested in anything that’s happening in the present, despite some lively supporting turns from Liotta, Tracy Morgan —showing some solid dramatic potential as grown-up Vinny — and James Ransone (The Wire), who plays Jonathan’s profane partner. Jonathan, for example, becomes increasingly desperate to maintain his present-day life intact, but it appears like his wife can barely stand the sight of him, so it’s hard to care about what happens to the couple. (Not entirely Holmes’ fault — it doesn’t seem like the script was remotely interested in letting her character show any love or concern for her husband.)

Returning to his real-life Queens stomping grounds, Montiel (A Guide to Recognizing Your Saints) fares slightly better as a director than he does as a screenwriter, establishing a specifically gritty part of New York City. Unfortunately, the film’s embarrassingly-staged rooftop climax and a truly ludicrous revelation leave a bad taste in your mouth and waste the efforts of a game cast.

The Son of No One is presented in its original aspect ratio of 2.35:1. The 1080p image is arrived at with an AVC MPEG-4 codec at an average of 25 mbps. The video presentation — especially for a movie set in two different time periods — is suitably dynamic in terms of color contrast. There may not be a ton of visual razzle-dazzle, but the sharp visuals help put you squarely in the movie’s world.

The Dolby TrueHD 5.1 track sometimes struggles to deliver intelligible dialogue without turning the TV way up, but does a nice job of bringing the various ambient sounds of New York City through your speakers.

Audio Commentary from writer/director/producer Dito Montiel and executive producer/editor Jake Pushinsky: It’s interesting to listen to Montiel talk about how a real-life incident influenced the movie’s storyline and his own book, but it’s considerably less interesting to hear him repeatedly point out bit players from his two previous movies and listen to the duo gush about their cast without offering any real insight.

Deleted scenes: (6:27) Though they are billed as “deleted scenes” on the Blu-ray case, this is really an extension of two sequences that already appear in the movie. The first expands on Roger Guenveur Smith’s dynamic performance as a junkie near the start of the movie, while the other features a self-indulgent stylistic flourish during an argument between Jonathan and his wife. Guess which one I liked better.

This is the third director-star collaboration between Montiel and Tatum (after A Guide to Recognizing Your Saints and Fighting), so this movie is absolutely worth watching if you’re interested in checking out the Bizarro Burton/Depp, Nolan/Bale, Scorcese/DiCaprio. If you’re a normal person, however, feel free to skip this crime drama that corrals a decent cast and introduces some interesting ideas, but squanders both.