We Bought a Zoo (Blu-ray) 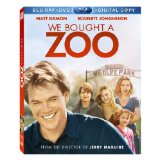 – “I have a question for you. You’re some random guy from the city, no one in the zoo community has ever heard of you. You know nothing about animals and you moved into a dump…why did you buy this place?”
– “Why not?”

Following the death of his beloved wife, Benjamin Mee does what any reasonable man would do under the same circumstances: he quits his job and moves his family into a zoo. I suspect you’ll enjoy this movie a lot more if you simply shrug your shoulders and say, “Why not?” We Bought a Zoo certainly can’t be accused of running away from its ridiculous-sounding title and premise, even though it’s based on the true story chronicled in Mee’s memoir of the same name.

Matt Damon stars as Mee, an adventurous journalist and father of two who buys a sprawling property that also happens to house a zoo filled with a colorful menagerie of animal characters, as well as an even more colorful group of employees (led by Scarlett Johansson). I actually think Damon, not exactly in Bourne fighting shape, wears fatherhood and the accompanying streaks of gray hair pretty well. He does a solid job of anchoring the movie, especially when he plays the pain of missing his wife and the frustrations of parenthood.

We Bought a Zoo is directed and co-written by Cameron Crowe (Jerry Maguire, Almost Famous, Say Anything…), who adapted the screenplay along with Aline Brosh McKenna. The movie has everything you expect from Crowe: an aggressively quotable script, an idealistic/risk-taking protagonist, and an awesome soundtrack. However, Crowe — making his return to dramatic features after taking a pounding for Elizabethtown — tells this story in a relaxed manner, while also expanding his scope as a filmmaker. On that second front, Oscar-nominated cinematographer Rodrigo Prieto (Brokeback Mountain) gets a major assist, as so does first-time composer Jonsi (of Icelandic rock band Sigur Ros) for his gorgeous, soothing score.

Even if you give the movie a pass for some of its many cloying or hammy moments — like John Michael Higgins’ cartoonish performance as a dastardly zoo inspector, which looks a lot more tolerable when you think of this as a family film rather than a serious drama — We Bought a Zoo still has its share of flaws. For example, the movie clocks in at 124 minutes, which is about 20 minutes too long. I’d start by chopping some of Thomas Haden Church’s forced performance as Benjamin’s skeptical older brother (which hurts, because I’ve loved the guy since Sideways ) and probably all of Elle Fanning’s painful work as a quirky love interest for Benjamin’s son (which hurts, because she was so good in Super 8, but pretty unwatchable here).

On the other hand, I enjoyed the understated connection between Mee and Kelly, the zookeeper played by Johansson. I even enjoyed Maggie Elizabeth Jones’ so-adorable-you-could(seriously)-die performance as Mee’s daughter, Rosie, despite the fact that it was straight out of Jonathan Lipnicki’s Precocious Playbook. (At the very least, it was a pleasant counterpoint to Colin Ford’s thankless work as Mee’s relentlessly prickish teenage son, Dylan.)

Still, the movie is dominated by its beautiful animals and terrific scenery. Both are propelled by a unique story that remains thoroughly engaging even when it meanders a bit or swings abruptly from comedy to drama. (At the very least, it deserves credit for avoiding any obvious manure gags.)

We Bought a Zoo is presented in its original aspect ratio of 1.85:1. The 1080p image is arrived at with an AVC MPEG-4 codec at an average of 22 mbps. A lot of this movie was filmed in natural light. As a result, the outdoor shots  — and even some interiors filmed in the natural light — look spectacular, and their warmth comes across extremely well on this disc. The sharpness and detail on both the humans and animals is also impressive and consistent throughout, while still providing an appealing amount of texture. (In the humans’ clothes, on the animals’ fur.) Even the black levels on the handful of interior or night time scenes are solid. Simply put, one of the best-looking movies I’ve seen on Blu-ray in a long while.

The DTS-HD Master Audio 5.1 track is no slouch either. Once again, a large portion of this movie takes place outdoors, and the dynamic track effectively delivers the symphony of ambient natural sounds. The dialogue comes across clearly, but the real attractions with this subtly immersive audio track are Jonsi’s score and the roar of lions, tigers and bears (oh my!) both up close and as part of the background.

(All of the bonus material is presented in HD)

Audio Commentary with director Cameron Crowe, actor JB Smoove and editor Mark Livolsi: I’m generally a fan of listening to commentary tracks that feature directors with their editors because they tend to discuss why certain cuts are made or how shots are selected. This one has the added benefit — and brilliant touch — of comedian JB Smoove (who has a small role as a real estate agent in the movie) to fill any silences. He actually hijacks the discussion early on, but you basically get a free ticket to his comedy act, so I’m not complaining too much.

Deleted and Extended Scenes: (37:27) There are 20 total scenes, most of which are inessential extended versions of bits that appear in the final cut. The highlights are an expanded version of the Opening Day sequence. This is also where most of Patrick Fugit’s (Almost Famous) performance wound up.

Gag Reel: (6:57) This cleverly-edited collection is a step above the average outtakes. The highlight is Damon making fun of the movie’s title by blurting out, “Let’s get every character to say that”

“We Shot a Zoo”: Go Behind the Scenes: (1:15:52) This extraordinarily in-depth documentary is divided into five parts: “Intro/Benjamin”, “We Build a Zoo”, “Rehearsal/Filming”, “It’s a Zoo”, “Inspiration/That’s a Wrap.” It starts off with the real-life Mee — who is English, and whose wife didn’t die until after they’d moved into the zoo — and takes us through the process of turning a California ranch into a zoo, Crowe’s filmmaking process, and working with the remarkable animals. It wraps up nicely with Mee and his kids filming their cameo towards the end of the movie.

“Their Happy is Too Loud” (17:29) The spotlight is on Jonsi and how Crowe — who had thus far relied on existing songs to help tell his stories — married the artist’s music with the visuals and words in his own movie. Some of Crowe’s interactions with the soft-spoken Jonsi are unintentionally funny.

“The Real Mee”: (28:35) A longer look at Mee, his kids and their lives at the real-life Dartmoor Zoological Park in England. At the very least, if you hated the Hollywood-ization of this story, you can still get an intriguing glimpse at the real thing.

If you don’t lock your cynicism in a cold, dark place before you watch this movie, you might get dizzy from rolling your eyes too much. Though We Bought a Zoo certainly has its flaws, it also tells its uplifting story told in a warm, earnest way. On top of that, the look and sound of the Blu-ray is top-notch, and the involving special features are funny and informative. They also expand on the inspiring real life story and give us a detailed look at the process of making a movie with  an absurdly-direct title.