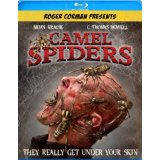 Most of us first heard about camel spiders in the early 1990’s during the first Gulf War. Apparently, these 6-inch bugs were causing quite a stir with the troops and were responsible for as many horror stories as the war itself. We were told they were instantly deadly and could grow to enormous sizes in a matter of days. Rumors had it that the creatures were killing machines that roamed the Middle Eastern deserts feeding off camels of all things. Or humans if they got in the way.

Of course, the reality is that none of it is true. They aren’t even really spiders. They don’t have any poison at all, and they only grow to about six inches. Turns out that the camels are perfectly safe, as well. None of that comes as too much of a surprise to me. What does amaze me is that it took this long for someone to make a monster movie about the critters. And, if you’re surprised that it was Roger Corman who did it, you don’t know very much about the history of the B horror film.

American soldiers are pinned down by some Taliban members in Afghanistan. It looks hopeless for our GI’s until the firing suddenly stops. Investigation reveals that the enemy was attacked by giant camel spiders. But before you pin a medal on their abdomens for joining the fight on terrorism, you should watch the rest of the movie.

A few of the smaller versions of the creatures hitchhike in a body bag and find themselves in Southern California when a military truck has a little accident. The spiders get away, and within hours multiply to thousands of creatures some as large as a medium-sized dog. It’s up to Captain Sturgis (Krause) to try and protect as many people as he can with his partner Sergeant Shelly Underwood (Brasselle). Along the way they accumulate a rag-tag group of survivors. There’s the brave but clueless Sherriff Beaumont (Howell). You also have the unspoken romance between Sturgis and Underwood. If you’re looking for more than a few cliché characters, you can always count on Roger Corman to deliver. It’s almost like there’s a quota and his directors get paid by the cliché. If that’s the case, director Jim Wynorski took home a boatload of money.

The cast is made up of relatively unknown actors who don’t necessarily have great acting chops. It’s not essential, and it’s not the filmmaker’s number one concern. But just in case someone in the audience cares, there are always a couple of actual professional thespians in the cast. Here that amounts to Brian Krause and C. Thomas Howell, whom you’ll see this summer in the new Spider-Man film. Melissa Brasselle comes from films like Cheerleader Massacre, so you know what level the rest of the cast is coming from.

None of that matters. Roger Corman movies are about just a few simple things. There’s plenty of cheese to go around. He delivers cheap monsters, and these guys fill the bill perfectly. The CG is so bad that the creatures don’t interact with the environment at all. They appear to float over the ground. Wynorski is smart enough not to linger too terribly long on the creatures. There not a lot of gore here. There is an occasional flash of cartoon-looking CG blood. One of the more humorous aspects is watching Brasselle shooting a machine gun. She’s blasting away haphazardly, mostly shooting the air, but connects more times than you would believe possible. The guns are also quite magical in that you can shoot several hundred rounds without one brass cartridge being ejected. I guess they’re the new “environmentally friendly” machine guns. It’s the harmless and mindless kind of fun you might see on a SyFy original picture. Come to think of it Roger Corman’s done a few of those as well. Expect more of the same here. Rent it and have a few laughs.

Camel Spiders is presented in its original aspect ratio of 1.78:1. The 1080p image is arrived at with an AVC MPEG-4 codec at an average 30 mbps. The picture is not going to be high on your list of high-definition image presentations. The CG looks pretty bad. This might be one of those films that looks better in standard definition. At times the colors look somewhat natural. Black levels are fine.

The Dolby Digital TrueHD 5.1 doesn’t do much to improve on the sub-par image. You can hear the dialog just fine, and the spider screeches are somewhat cool. Otherwise this isn’t going to win any sound design awards.

You watch these films you know exactly what you’re getting. It’s all about the cheap thrills. Cheap being the operative word. Corman often brags that he’s never lost money on any of his literally hundreds of films. Let’s just say he didn’t get that reputation by putting a ton of money on the screen. You either have fun with these things or you don’t. I rather enjoy the schlock of it all. This is one of the schlockiest. Hey, it could be worse, right? “I imagine it’s better than a bullet to the head.”

Gino Sassani is a member of the Southeastern Film Critic's Association (SEFCA). He is a film and television critic based in Tampa, Florida. He's also the Senior Editor here at Upcomingdiscs. Gino started reviewing films in the early 1990's as a segment of his local television show Focus. He's an award-winning recording artist for Omega Records. Gino is currently working on his 8th album Merchants & Mercenaries. Gino took over Upcomingdiscs Dec 1, 2008. He works out of a home theater he calls The Reel World. Favorite films: The Godfather, The Godfather Part II, The Body Snatcher (Val Lewton film with Karloff and Lugosi, not the pod people film), Unforgiven, Gladiator, The Lion King, Jaws, Son Of Frankenstein, The Good, The Bad And The Ugly, and Monsters, Inc.
We Bought a Zoo (Blu-ray) The Divide (Blu-ray)