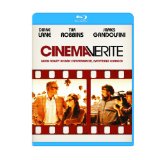 “One must never let the public behind the scenes for they are easily disillusioned, and then they’re angry with you for it is the illusion they love.”

Sure, this quote is spoken by a very minor character and awkwardly shoehorned into the story, but it still makes its point. I realize it’s almost impossible to imagine now, but there was a time we didn’t have to capitalize the words “Real Housewives” and people were actually ashamed if they came off badly in front of a camera. HBO’s Cinema Verite tells the behind-the-scenes story of the creation of An American Family, the PBS documentary widely considered to be the first reality television show.

An American Family followed self-proclaimed “West Coast Kennedys” Pat and Bill Loud (Oscar nominee Diane Lane and Oscar winner Tim Robbins), and their five children. The show was filmed in 1971 — resulting in more footage than was shot during World War II — and aired as 12 episodes in 1973. Unfortunately, things in the Loud household weren’t as perfect as they looked to the outside world, and the cameras only served to amplify those existing issues. The show went on to document Pat and Bill’s on-camera separation (and subsequent divorce).

Things get off to very promising start as we see just how favorably Cinema Verite‘s recreations compare to footage from the original documentary. Co-directors Shari Springer Berman and Robert Pulcini don’t blur the line between fiction and their real-life subjects as much as they did in American Splendor, but the incorporation of An American Family footage — sometimes it’s hard to tell if you’re looking at the cast of Cinema Verite or the real Loud family — is a nice, playful touch. It’s also another expression of the directors’ impressive eye for detail, which extends to the fantastic set design and other period touches.

The acting is also exceptional across the board. Lane — revealing more wrinkles than usual, but still looking groovy in her 1970s wardrobe and giant sunglasses — does an incredibly good job of anchoring the film. Since Pat couldn’t have possibly known what she was getting into, it’s a bit heartbreaking to watch her agree to allow cameras into her home, because she naively believes it will bring her family closer together (and keep traveling salesman Bill home more often). It’s definitely more subtle than one of the Loud kids exclaiming the purposely unintentionally funny line, “We can’t get a divorce…we’re the American Family!”

Robbins is terrific in what could’ve been a pretty one-dimensional role. Bill, channeling his inner salesman, immediately tries to gain favor with the camera crew (and, by extension, America). His perma-smile can’t hide more than a bit of sadness, and Robbins absolutely crushes the big break-up scene while only saying a few words. Emmy winner James Gandolfini — rocking a toupee that would make Billy Zane insanely jealous — also stars as pioneering producer Craig Gilbert, who had the idea to examine an American family the same way Margaret Mead studied native cultures. Gandolfini is good (especially when Craig is being manipulative), but I wanted to see more of Gilbert’s struggles to get An American Family on the air than his dalliance with Pat.

In fact, Cinema Verite spends too much time on the triangle of sorts between Pat, Craig and Bill (not to mention Bill’s various girlfriends), although the connection between Pat and Craig is more intellectual than anything. That time could’ve been spent on developing some of the other Loud kids besides Lance (one of the first openly gay people to appear on television, played by Thomas Dekker in a warm, over-the-top performance). Or how about a little more time on Alan and Susan Raymond (Patrick Fugit and Shanna Collins), the newly-married couple who bonded with the Louds while filming them? (The real-life Raymonds served as consultants for Cinema Verite.)

Most importantly, the script by David Seltzer is disappointingly straightforward and shortsighted. I wouldn’t mind the fact that the movie crams the original documentary’s huge cultural impact into the final 10 minutes — and condenses audience reaction into a couple of nasty quotes from the media — if the depiction of the Louds had been a little less superficial.

Cinema Verite is an entertaining look at a groundbreaking television experiment. Unfortunately, the movie doesn’t seem terribly interested in exploring exactly how and why we were all so fascinated…or how and why that fascination has never gone away.

Cinema Verite is presented in an aspect ratio of 1.78:1. The 1080p image is arrived at with an AVC MPEG-4 codec at 23 mbps. The majority of the movie is set in Santa Barbara, and the film’s sunny, yellowish tint comes through beautifully, as do the colors in general. The visual presentation is also remarkably versatile, switching effortlessly between various film stocks to mirror the look of the original documentary.

The DTS-HD Master Audio 5.1 track is extremely clear and full-bodied. This isn’t the most dynamic audio track in the world, but everything it is asked to convey — the dialogue, the score, the songs — comes through perfectly and in a balanced manner.

Audio commentary with directors Shari Springer Berman and Robert Pulcini and actress Diane Lane: This conversational track is a treat and a nice departure from the commentaries where the speakers merely narrate what is happening on screen. Instead, the directors and their star use the movie as a jumping off point to discuss the production (parts of Los Angeles stood in for Santa Barbara, because Santa Barbara no long looks the way it did in the 1970s), the original documentary and its impact, and meeting the real Louds. In short, it’s the place to find some of the stuff the feature film was missing.

The Making of  “Cinema Verite”: (3:32) This behind-the-scenes doc is a wasted opportunity given the fascinating subject matter. (Plus, all the Louds — except for Lance — are still alive.) This is more of a time filler for HBO between the umpteenth airing of Inception and a new episode of Game of Thrones than a legitimate featurette.

Cinema Verite is the rare instance where I actually wished a movie were longer. As it stands, it’s a well-acted film delivered in a very pretty package — enhanced by a fantastic Blu-ray presentation — that seems content to merely skim the surface of a hugely influential piece of work.