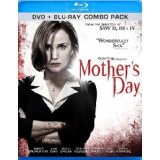 “If my family can’t live in this house, you sure as hell can’t either!”

Daniel (Frank Grillo) and Beth (Jaime King) Sohapi picked up a great deal on a recently foreclosed house, and they’ve invited a handful of friends over to celebrate. A tornado threatens the area, but everyone is partying in the basement, which has been recently reinforced as a tornado shelter. Things look great in suburbia until three frantic and deadly bank robbers, Ike (Patrick Flueger), Addley (Warren Kole), and Johnny (Matt O’Leary), return to their childhood home following a botched bank robbery. Johnny is dying from a gunshot wound, their accomplice in the robbery made off with all the stolen cash, and the boys lost their secure contact phone to mother. Now, on top of that, they discover the home they grew up in is no longer theirs as mother lost it to foreclosure, a fact they would have known if they could have contacted her after the bank heist. Well, when life gives you lemons… They decide to hole up in the house until mother (Rebecca De Mornay) and sister Lydia (Deborah Ann Woll – Jessica from True Blood) arrive to sort things out, keeping the current residents and their guests as hostages. Things turn from bad to worse for the victims when mother shows up and takes charge. With the authorities closing in and the outlaws in need of $10,000 to secure their escape across the border into Mexico, desperation ups the ante in what these home invaders are willing to do to get what they need from the new homeowners and their most unfortunate guests.

This is a brutal film. Not necessarily extremely gory, although it doesn’t shy away from showing the gore, but it is definitely vicious and downright mean-spirited. It reminds me of something straight out of EC Comics Crime SuspenStories. In fact, it is a reimagining of a 1980 Troma film of the same name, keeping only some of the character names and wisely throwing out the rest of the low rent Texas Chainsaw Massacre wannabe plot. Director Darren Lynn Bousman surrounds himself with decent actors and Scott Milam’s screenplay never drags, amping up the suspense with each act.

Due to financial problems, the company that acquired the film in 2009 went under and Mother’s Day was shelved for a few years. Unfortunately, because of this it didn’t secure a stateside release in theaters, so here it comes direct to video. Don’t let that dissuade you from watching this if you enjoy tense and brutal thrillers. Even the most incidental character is fully realized, so when bad things start happening you care about the victims, and I dare say even the villains. I found myself emotionally invested in and satisfied by the outcome, even if it is a very cynical and cruel story.

The entire cast does standout work, but Rebecca De Mornay’s performance is a tour de force. She can be amazingly kindhearted one moment and unbelievably cruel the next. Her smile is so matronly and inviting, you find yourself accepting her twisted logic against your better judgment. You simply can’t take your eyes off her. I may have fallen in love with her in Risky Business, but I truly was horrified by her in this. She is in some ways the far crueler variation of her character in The Hand that Rocks the Cradle.  Bousman has commented in interviews that De Mornay took over the character and was very protective of her performance, picking out her own wardrobe and even doing her own makeup. This is obviously a very good thing as her attention to detail elevates this kind of film to levels it has no right to attain.

Mother’s Day features a MPEG-4 AVC encoded 1080p transfer in a 2.40:1 aspect ratio and runs an average of 20Mbps. Although shot digitally, it retains a natural light grain, giving it a film-like texturing, but never sacrificing the fine details. Skin tone is natural and blacks are rich and layered. Colors never quite pop, as the film tends to be a little soft, but the balance is true, leaning towards a slightly dark and warm tone. There is no noticeable DNR or edge enhancement, and the transfer doesn’t suffer from noise or digital glitches.

Mother’s Day’s lossless Dolby TrueHD 5.1 surround track doesn’t really rise above the fray, but it is technically accurate and aurally satisfying. The surround is effectively immersive and makes full use of the soundstage. Music throughout the movie demonstrates a natural presence with decent clarity and rich low end bass. Some of the low end was a bit extreme, devolving into a bit of vibration distortion. Unfortunately the gunshot sound design itself is noticeably unrealistic, never quite sounding real-life accurate considering the gunshots often happen in such a closed-in environment. Much of the film is dialog driven, so it tends to stay in the center speaker, but the balance between dialog and SFX/music is solid and clear.

There is only one extra feature with this release of Mother’s Day, and that is the audio commentary track with Director Darren Lynn Bousman and Actor Shawn Ashmore. The commentary itself is fairly generic with the commentators talking about production details, location shoots, cast chemistry, and praise for De Mornay’s performance. The best story is about a run in with armed police when the cast and crew were shooting exterior scenes unknowingly near the location where a real bank robbery had just occurred.

Because of the empathy you feel for the victims, due to excellent acting and writing, this can be a very uncomfortable film. It won’t be for all tastes, but if you like a suspenseful crime thriller with heavy horror overtones, you will enjoy Mother’s Day. It is a far better film than the original it remakes. Delayed, overlooked and underrated, this is a fine addition to the home invasion genre, and it’s out just in time for Mother’s Day.

“This is unacceptable. I swear, sometimes you boys are just little savages.”