Too Big to Fail (Blu-ray) 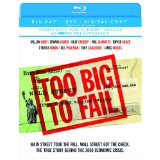 -“And what do I say when they ask me why it wasn’t regulated?”
-“No one wanted to. We were making too much money.”

At first glance, sitting down to watch a film about the financial meltdown of 2008 seems only slightly more fun than going through the actual meltdown again. Fortunately, director Curtis Hanson (L.A. Confidential) and a towering ensemble cast — I felt like I’d died and gone to Character Actor Heaven — mostly keep Too Big to Fail away from CNBC territory and deliver a brisk, entertaining film.

Based on the 2009 book of the same name by Andrew Ross (No Relation to Aaron) Sorkin, the film focuses on Treasury Secretary (and former Goldman Sachs CEO) Henry Paulson (William Hurt) in 2008 as he and his colleagues deal with the catastrophic problems at Lehman Brothers and AIG, as well as the eventual decision to create the Troubled Asset Relief Program (TARP). In case your eyes have already started to glaze over, let me assure you Hanson and writer Peter Gould present this story in a compelling way that is easy to understand, yet rarely feels dumbed down. (Maybe a little watered down, though.) One notable exception is a blatantly expository scene where Paulson and his staff explain the AIG situation to another member of his team (Cynthia Nixon) so the audience could understand. I also could’ve done without the subtitles that popped up to introduce every single character…even if someone on-screen had just introduced them!

Too Big to Fail opens with archival footage of ex-presidents Ronald Reagan, Bill Clinton (blame for both parties!) and George W. Bush extolling the virtues of deregulation within the American banking industry. The movie’s cruel joke is that these financial institutions — that were so put off by the idea of government supervision — are practically begging for government intervention when it all starts crashing down. (But don’t say “bailout”; the movie’s characters prefer the term “very large purchase assistance package.”) The crueler joke is that the public wrongly assumes these power players know what they’re doing simply because they hold very important positions. (Chris Cox, chairman of the Securities and Exchange Commission, doesn’t even know if he has the power to direct Lehman Brothers to file for bankruptcy.) The cruelest joke is that, although the American public knew the economy was in bad shape, we didn’t realize just how close we came to having the entire financial system collapse. (In a way, Too Big to Fail is scarier than any horror movie released this year.)

Hurt gives a strong performance that seems a bit minimalist at first, but grows more impressive as the financial crisis worsens and takes a physical/psychological toll on Paulson. (The brief scenes with Paulson’s wife played by Kathy Baker, however, failed to make an impact.) He gives a good central performance even though Paulson isn’t a great central character. Other standouts include James Woods (using his great, manic energy as stubborn Lehman Brothers CEO Dick Fuld), a nicely understated Paul Giamatti as Federal Reserve Chairman Ben Bernanke (who actually presents a compelling case for funding a government bailout to avoid a worse version of the Great Depression), Topher Grace (radiating intelligence beyond his youthful appearance as a member of Paulson’s staff, even though the actor is well into his 30’s) and solid, squirrelly work from Billy Crudup as then-president of the Federal Reserve Bank of New York (and current Treasury Secretary) Tim Geithner. Other than that, I actually thought the cast was a little overqualified when you consider how little they were asked to do. Then again, maybe Hanson’s plan was to cast as many familiar faces as possible to keep us engaged with these mostly-faceless CEOs we only read about in the paper.

The movie clocks in at 98 minutes, so Hanson keeps the story moving at a nice clip. The director’s best cinematic flourish is staging a meeting of Wall Street CEOs — played by the likes of Bill Pullman, Tony Shalhoub, Matthew Modine and Evan Handler — as if it were one of those mob movie gatherings featuring the heads of crime families. On the other hand, the film inevitably makes some omissions to fit the story’s structure that positions Paulson as the protagonist.

Too Big to Fail set out to show how decisions in Washington, D.C. and Wall Street impact those of us on Main Street. What we learn is that there’s plenty of blame to be passed around in all those places. Maybe the cruelest joke of all is that the movie’s big hero narrative involves watching these characters scramble to avoid a crisis they’ve all created themselves. (Imagine if the plot of the next Batman movie involved the Caped Crusader racing to get someone to the hospital after he’d run them over with his Batpod.)

Too Big to Fail is presented in an aspect ratio of 1.78:1. The 1080p image is arrived at with an AVC MPEG-4 codec at an average of 22 mbps. Most of the action takes place in offices and conference rooms, and the sharp video presentation brings these indoor settings to surprisingly thrilling life. Black levels are particularly good, given that there are more than a few darkened interior scenes. Decent color and contrast all round. The rare outdoor scenes (especially an early morning walk through Times Square) looked even lovelier when compared to the tense indoor stuff. On the other hand, the movie’s occasional use of real life news broadcasts — and their unavoidable grain — took me out of the narrative.

The DTS-HD Master Audio 5.1 track conveys the dialogue well enough, which is particularly important for a talky movie like this one. The track also does right by Marcelo Zarvos’ pulse-pounding score. Unfortunately, there’s not nearly enough ambient noise coming out of the speakers for my taste considering the hectic office/city setting. This track could’ve  been much more dynamic.

(All the bonus material is presented in HD.)

The Making of Too Big to Fail: (1:47) A brief, but effective mini-doc mostly designed to run on HBO before a new episode of True Blood. It’s really an appetizer for…

Opening the Vault on the Financial Crisis: (19:07) …this longer, engaging bonus feature that features cast, crew and real-life financial analysts dissecting the financial meltdown. (The short version: consumers blame the banks, while banks blame the public.) This documentary provides a bit more historical perspective beyond the events of 2008 and is a really strong supplement to the movie.

Timeline of a Crisis: This interactive feature presents a chart where you can use your remote control to trace the financial crisis from Oct. 9, 2007 (Dow has its highest closing in history) to Nov. 20, 2008 (Dow falls to its lowest point since 2003.) Naturally, many events depicted in the film are also covered.

HBO was the perfect place for this story to be told. I mean, good luck getting people to spend upwards of $20 (ticket + snacks) at the movie theater to see a film about how our economy went in the toilet? Still, it’s a story worth telling, which is probably why this project attracted top-shelf talent both in front of and behind the camera. The film’s depiction of the financial meltdown of 2008 isn’t perfect, but it’s well-acted and entertaining. I’d recommend you give this one a watch, but I wouldn’t recommend you treat it as any sort of historical account. (At the very least, it will probably spur you to do your own research into what happened/is happening.)