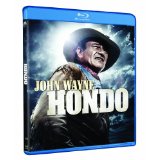 There are countless John Wayne Westerns in existence, but a hearty handful stand out above the rest. Hondo is a part of said handful. The story is a somewhat familiar one; that of a lone gunman seeking redemption by helping out a young woman fight off Indians…it just howls “John Wayne Western.” That being said, there are some standout performances and the portrayal of Native Americans is tad more progressive than what was within Westerns of the previous decade.

This film was created at the tail end of the first wave of 3D films, in the 1950s, and it only seems to be utilized during the opening credits and the climactic battle scene (mostly via arrows being shot almost towards the camera). 3D is a term that seems to imply a certain level of campiness, but Hondo avoids that pitfall by developing its characters and enriching the story with some (non-corny) twists and subplots that help move past the larger, cowboys vs. Indians story.

Geraldine Page was a famously odd choice for leading lady in this picture as she was mainly known as a Broadway stage actress up to that point. Her performance earned her an Oscar nomination, forever shushing any doubters. Page’s chemistry with Wayne varies from nuanced to explosions of emotion as their characters traverse through intense revelations about Wayne’s dark connection to this family’s past.

This is an enjoyable Wayne film, and this Blu Ray edition is pure to please fans of the Duke and of the Western genre. Fans will also enjoy spying a young, Pre-Gunsmoke, James Arness as a young cavalry member.

Widescreen 1.78:1. I can tell that the team behind the digital enhancements here tried their darnedest to make a great transfer. In many ways they succeed (the opening sequence looks gorgeous) but other points have the washed out colouring of a “colorization” film (I assume many readers out there recall that that odd period of film history). It isn’t in “Technocolor,” but rather Warner Bros’ own brand of colour film used.

English 5.1 DTS-HD Master Audio, Enlish Digital Mono and English, French, Portugese and Spanish 5.1 Dolby Digital are all available.. The audio experiences even more troubles than the visuals. Again, the team behind this release clearly made an effort but certain bits of dialogue could not be completely salvaged.

Introduction my Leonard Maltin: Mr. Maltin is so much more at home when speaking about the history of film than schmoozing for Entertainment Tonight.

Commentary by Leonard Maltin, Western Historian Frank Thompson, and Actor Lee Aaker: This bunch have a lot of interesting things to say about Hondo, and tie it wonderfully to what is happening in cinema at the time. A very fine commentary track, as it should be.

The Making of Hondo: Contains some additional facts not mentioned in the commentary (though not a whole lot as the aforementioned commentators cover a lot of ground). This is very nicely assembled and presented with great care.

From the Batjac Vaults: A very short but cute piece of Maltin being shown a John Wayne film “vault” when Hondo was first converted to video in the 1990s. Taken from Entertainment Tonight.

The Apache: A brief history lesson on the particular tribe of Native people featured in this film. As Maltin mentioned in the commentary track, this film featured specific people, and not just an indiscernible mass of “savages” like previous Westerns did.

Photo Gallery: A very nice collection of stills and behind the scenes pictures. Some of the action shots are simply fantastic.

This is a great release for Western fans and film collectors alike. I know that I had knocked the Audio and Video quality a tad, but they certainly tried there darndest, and you likely will not find a better release of this film. This is especially true since this happens to be the first time the film is released in “Widescreen.”