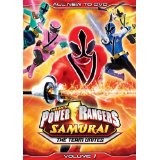 Did you know that Power Rangers Samurai is the nineteenth season of Power Rangers? But the difference here is that Saban Brands bought back the franchise and have promised a more fun and humorous Power Rangers, similar to older seasons when they last owned the product. So, today I have for you folks a look at the first two volumes of this new series. Let us see if the new team holds a candle to the heroes of old.

47,48,49,50. Ready or not, here we go. So begins another game of hide and seek. However, this school yard game is cut way short when the Nighloks (an evil alien force) ATTACK! All of the sudden, we see the Red Ranger, Jayden (played by Alex Heartman) with his Mentor Ji (played by Rene Naufahu) heading off the pack. Ji offers the Nighlok pack the option to retreat but the Red Ranger is in no mood to give retreat this day.

He slices, he dices, he cuts through Nighloks in an instant. He is the Ginzu…errr Red Ranger. But Mentor Ji reminds him that he can not go solo forever. Jayden was destined to form a team of Power Rangers. He scoffs a little bit at the idea but agrees. Ji signals to the others (Bat Signal, Theme Song at Times Square, Smoke Signals, not sure) that the time has come to fulfill their destiny and that the team will soon be formed.

Let’s see who the team will be. There is the blue ranger, Kevin (played by Najee De-Tiege) who must give up his dream of swimming in the Olympics. The pink Ranger, Mia (played by Erika Fong) tutors elementary students. The green Ranger, Mike (played by Hector David Jr) is a rebel at heart who enjoys video games. Finally, there is the yellow ranger, Emily (played by Brittany Anne Pirtle) who is just a country gal.

Meanwhile, back at the Hall of Doom (Justice League reference, FTW!) or the evil alien lair, we see that their evil leader Xandred has awaken out of his long sleep, coma, etc and wants to launch a more powerful attack on the city. He assigns a leader and they go through the portal to the city to attack. This might be the point where we need to get the rest of the team. Master Ji sends out a signal in the form of an arrow. (or many arrows)

Seriously? This arrow flies through the air (and most likely impales birds, people and possibly hamburgers) and lands at the four other destinations. The four rangers then rendezvous at the given location. They get there rather quickly (especially considering one was riding a horse) and are anxiously asking each other who the Red Ranger is. All of the sudden (and I wish I was making this up), the Red Ranger rides in, on a freaking white horse. Okay, I am done. What more really needs to be said at this point?

Anyway, the team comes together, and a few montage videos and corny fighting sequences later, the new team of Power Rangers stands tall. But there are more battles to be won in future episodes and Lord Xandred will not stop until he conquers the fair city and brings an end to the Power Rangers. Stay tuned for more big weapons, gruesome aliens and bad cooking, as Power Rangers Samurai comes to your favorite syndicated channel near you.

On one hand, I am glad that Saban Brands has reclaimed their Power Rangers property. On the other, this is still a really silly show (but somehow still has a fairly decent loyal fanship) and the actors are mostly playing this one by the numbers. The only exception to this is Jayden (who does an admirable job as the Red Ranger) and the comic relief duo of Bulk (played by Paul Schrier who some might remember from the original series) and Spike (played by Felix Ryan), who is his nephew.

The cheese factor is pretty high in this show and I know that this show is trying to be more fun but this is borderline slapstick. I was half expecting for Jayden to slap Mike over the head and then try to eye poke Kevin before he blocks it followed by a Mentor Ji team slap of them all. Somebody will get that. Anyway, this show has always needed to decide whether this is comedy or adventure but instead we get somewhere I in between with very mixed results.

The film is presented in 1.78:1 anamorphic widescreen. This is the first time the Power Rangers have been in HD and it actually does a lot for the series. It looks a lot more polished than before (except for the big monster battles which are still cheesy to this day) and color is especially vibrant in a lot of the scenes. Despite the cheese factor, there is a lot more to look at in the various scenes and Erika Fong is rather easy on the eyes to boot.

The audio is provided in 5.1 English Dolby Digital (2.0 Mixes for Spanish and French also included). 5.1 Audio is finally here as well but honestly it is a mixed bag. The volume is a little low compared to like shows and offerings. But once you get the volume balanced, it does provide a good deal of pop and the dialog is clear while the sound effects are not jarring and keep you focused on the action. I do wish they would tone down Spike’s voice some, it is so ridiculous that it is almost nauseating.

There have been forty episodes of this Power Ranger series so far. As long as there continues to be source material for the battle scenes (Samurai Sentai Shinkenger), there will be a reason to continue this iteration. These two volumes serve as a decent introduction to the series and fans will probably love it, mainly because it serves as a milestone in so many ways.

First, the show is back with the originators and we even get a familiar cast member in the form of Bulk to help bridge the show. It is also the first time this show is in high definition (widescreen/5.1 sound). Honestly, if you are a fan, you will probably eat this up. Casual fans might want to catch this show on Nickelodeon with their kids if they are really curious to see this sucker unfold. Even then, this is best left for the $5 bin (especially with only 4 episodes per volume) at a Wal-Mart near you.

Volume 2: A New Enemy
Day Off
Sticks & Stones
A Fish Out of Water
There Go the Brides

Michael Durr has been reviewing movies for the better part of fifteen years now. He primarily enjoys thrillers, sci-fi, animation and even a little courtroom drama. His favorite films include Escape from New York, the Goonies and anything with Alyssa Milano. When he’s not praising Kurt Russell as the greatest actor of our time or scratching his head over a David Lynch flick, he’s spending time at home in Texas with his lovely wife, Lori and his amazing son. How they put up with him is a mystery, but even Basil Rathbone doesn’t have the time to solve that one.
Celebrate Father’s Day With A Monster Prize Package From A&E/History Exclusive Interview With Bernie Kopell of Lancelot Link: Secret Chimp, Get Smart & The Love Boat